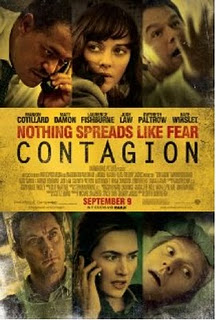 But I am a huge fan of Stephen Soderbergh. Like… HUGE. So when Soderbergh gathered up seemingly every Oscar winning/nominated actor he could find to make a globe-spanning thriller about a killer virus, I swallowed my normal boredom at thrillers (and attempted to quell my hypochondria for a night) to check it out.

Soderbergh manages to make the disparate storylines (a WHO worker in China, the CDC head dealing with political ramifications, a Field Worker dealing with a Minnesota outbreak, a Dad dealing with the loss of his family) work together without resorting to cheap gimmicks. Most of the storylines in Contagion barely connect, brought together only by this virus that is tearing the world apart. But due to the almost perfect eye for casting and interest, this still manages to feel like a cohesive whole*.

Only one storyline ever really feels superfluous- Marion Cotillard plays a WHO worker who finds herself in the middle of a hostage situation in China. It’s useful to show the scope of the devastation (especially since most of the rest of the footage is fairly USA-centric), but it is ultimately a grander theme than the movie fully touches upon, and is the lone storyline to feel underserved by the format of the film.

Kate Winslet and Laurence Fishburn play members of the CDC working two disparate ends of the problem. Winslet works in the field and turns in a classically great performance as a brave, lonely woman facing down disease and bureaucracy. Fishburn, in contrast, plays the political angle of disease control, and the story of his struggles to remain true to his family and his country in the face of such a personal and global crisis is beautifully played.

But the true standouts of the film are Matt Damon and Jennifer Ehle. Damon is fantastic as the husband to Gwyneth Paltrow (who is patient zero for the virus). MINOR SPOILER: Damon loses his wife and son early in the film, while simultaneously finding out that he is immune to the virus. This makes Damon the only character not afraid for his own life. Instead, Damon spends the entire film trying to protect his teenage daughter. The elegant simplicity of Damon’s performance here, completely devoid of the movie star charisma that made him so charming in films like The Adjustment Bureau or Invicutus, is in how completely he makes us forget that he is Matt Damon. The utter heartbreak and hope of Mitch Emhoff and his relationship with his daughter ground the rest of the film as it flies through continents.

On the opposite end of the spectrum, Jennifer Ehle plays a government doctor who risks everything to save everyone. Ehle imbues her character with a rigid determination that makes her a perfect hero, but it’s also the way that she fleshes out the woman that makes the performance so strong. When we first meet Ehle’s Dr. Ally Hextal she’s forgettable, but enjoyable. Ehle takes us with her on her journey to heroic excellence, and this helps to keep the ending from seeming cheesy or convenient.

The film is also noteworthy for what I saw as an unusual political stance. In your typical Hollywood political thriller (especially those made by noteworthy and challenging directors), the government ends up as the bad guy. Think The Constant Gardener or The Interpreter. In those films, the government serves as a bastion for corruption and mal intentions. In contrast, Contagion sees the government as almost uniformly interested in doing the right thing. In fact, the outright villain of the piece is a simple blogger (played by Jude Law), whose search for the “truth” is revealed to be nothing more than a cash grab.

I’m not sure the movie was trying to make a political point, but I personally loved the film’s belief that most people involved were trying to do what they thought was right. In the face of catastrophe, this film argues, most people will do the right thing on an individual level. It recognizes fear as a compelling reason for evil (see the lootings, shootings, and other moments of true human terror throughout the film), but ultimately seems to believe in the good will of people saying they’re trying to help us. Even the “wrong” they do is grounded in human realities and kindness. Not to get all political, but in an age where it can be easy to disparage either side of the political spectrum and most areas of government as being only in it for selfish, sometimes evil-seeming reasons, it was profound to watch a movie that instead argues that most people are trying to do the best they can by humanity.

In Contagion, fear may be just as lethal as the virus that is killing 20% of the people it affects, but decency is still a widely available cure.

*The scope here reminded me a lot of the novel version of zombie-invasion thriller World War Z, which is a pretty fantastic read if you haven’t already picked it up. Given that the property is currently being adapted for a movie by Brad Pitt’s production company, and it seems like they’re leaning towards adapting the dense book into a more conventional narrative, I really hope they take a look at Contagion and realize there is a better way.