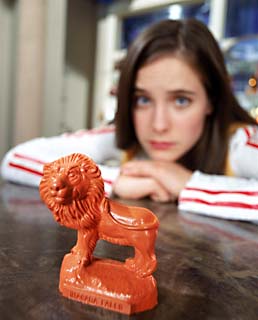 All hail the the almighty end of the writers strike.

That being said, there’s another almighty at work in today’s TV climate- the actual almighty.

Considering all the shows in question thought themselves completely original at the time of conception, it’s almost surprising that in the span of the last 2 weeks Ive come in contact with 3 different shows about people who are contacted by God… that’s right THREE.

Such an obscure (and possibly controversial) concept, one would think, would be a rarity- oh no, it’s not.
I recently bought the second season of an old favourite of mine on DVD- “Joan of Arcadia”. I also have fallen newly in love with an under appreciated gem called “Wonderfalls“. Inspiring slightly less enthusiasm but still warranting a watch is “Eli Stone” which premiered 2 weeks ago in the strike-struck wasteland that is television at the moment.
There are probably a couple more “god speaks to our characters” shows out there too- I’ve just missed them.

Here’s the breakdown of the prophet formula:

2) the snarky friend: someone to question the weird behaviour of the new found prophet and keep them rooted in reality. again, sarcasm is a must but it has to be someone who knows the hero well and spends a lot of time with them (before and after the visions begin). (Jaye’s friend Mahandra, Joan’s friend Grace and Eli’s assistant Patti)

3) the authority on science: the person who tries to explain it all away (Jaye’s therapist Dr. Ron, Joan’s scientist brother Luke and Eli’s doctor brother Nathan)

4) the authority on faith: the person who knows about “something more” who can explain why the hero is perhaps not completely crazy (Jaye’s theologist brother Aaron, Joan’s artist boyfriend Adam and Eli’s acupuncturist friend Dr. Chen)

5) the bizarre God-ly medium: how God reaches our hero (inanimate animal objects speak to Jaye, God appears as ever changing everyday people to Joan and He reaches Eli through the songs of George Michael)

6) and everything else: a lack of organized religious participation on the part of the hero, strong family connections, weekly cryptic “missions”, the hero’s strong sense of detachment from others, moderate to enthusiastic critical acclaim, low ratings and early cancellation.

and who says only crime shows can be procedural? if visions from the ether can be formulaic, anything can. God help us all.