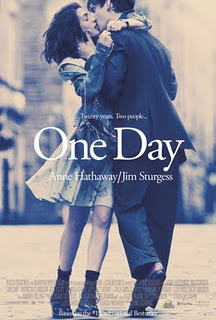 The film adaptation of the truly wonderful book One Day, predictably, leaves much to be desired. While the presence of the always sensational Patricia Clarkson (perfectly cast in the pivotal role of Dexter’s idealized mother) certainly helped the film along, the incredible miscasting of the story’s leading lady proved devastating to the adaptation.

So much of the complication in Dexter and Emma’s relationship comes from their regional class differences. In casting an American actress (no matter how charming) without perfect accent skills, the filmmakers essentially robbed themselves of that crucial tool. Anne Hathaway could have given the performance of her life (which, for the record, she did not even come close to giving) and no one would have cared because her accent work was just so bad. It was inexcusable (though I will admit that no one pulls off an “awkward girl comes into her own” makeover quite like Hathaway).

London native Jim Sturgess fared better, and not just because he was able to use his real accent. I actually quite liked his Dexter, a tricky part to humanize with romantic film audiences so used to knights in shining armour. Sturgess didn’t shy away from Dex’s seedier side, his insecurity, his superficiality. In the film’s early scenes, with his floppy hair and 80s wardrobe, Dex was all popular kid charm and his magnetic pull for wimpy Emma was all about that impersonal allure. As he moved into the 90s, Sturgess showed off Dexter’s tender side in his small scenes with Emma and his mother, filling in the blanks of how Emma met the real him. But he never stopped slipping his obnoxious “it”-boy jacket back on whenever out in public. His dramatic social slide late in the story (and the conservative grooming of Dex’s 30s) did the character wonders, Sturgess morphing into a mature version of the good guy who’d lingered underneath the hair gel. The entire time, I never lost sight of why Emma loved him even if, like her, there were times when I didn’t really like him anymore. An overdramatic moment or three was my only bone to pick with Sturgess, unfortunately tasked with carrying a couple’s story largely alone. I had my doubts about the Across the Universe actor when the casting was announced, but as far as strong performances in mediocre films go, Sturgess won me over.

I was also happy to see Romola Garai, a favourite from Shakespeare films where she’s played some of my all time favourite characters with great aplomb. She did as much as she could with the incredibly boring character of Sylvie, while the film did next to nothing with the potentially very funny characters of Tilly (Jodie Whittaker) and Suki (Georgia King).

More than anything though, what the filmmakers failed to realize was that the one day format that made the book so unique was ill suited to film. While on paper, author David Nicholls had the space to explore each July 15th in sometimes revealingly mundane detail, film as a medium doesn’t abide by such lollygagging. Much of the growing up subsequently got skimmed over, rushed through or crammed into a montage. Despite Sturgess’ valiant efforts, I didn’t know the film version of these characters as well as I knew the ones in the book, so I didn’t care about them as much. We got to see all the dramatic stuff- the fights, the deaths, the sexual close calls- but rare were the scenes when we got to appreciate Dex and Em as Dex and Em in all their “she made you decent and you made her happy” glory.

With big names, pretty settings, catchy music and Hollywood-friendly pacing, the film of One Day lost the realism and nuance that made the book really special.