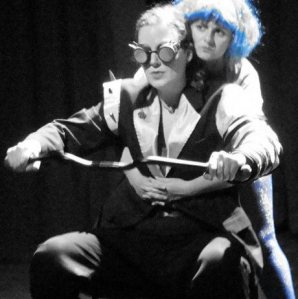 Not a Totally Hideous Dystopia

On my latest adventure into the Boston fringe theatre scene, I discovered what may be the longest, most eccentric title yet; the production bursts with the same energy. 2010: Our Hideous Future: The Musical!, a Near-Futuristic Dystopian Cyperpunk Musical Comedy, flashes and pulses with a punk rock score and “hip” cyber jokes. I will admit that I was/am a cyber geek and I suppose the show could be renamed “a musical comedy for cybergeeks”. The audience was split between patrons who dropped into Club Oberon after a long day in the office (really, what did they expect? Carousel?) and the cult crowd that 2010: Our Hideous Future has been generating since its debut at the Boston Playwrights’ Theatre in August 2010. This show speaks to a generation of young theatregoers who tweet on the T, Facebook a break-up (yes, I used it as a verb), and use Foursquare to update Mom and Dad about when they’ll be home.

The show, written, directed and produced by Andy Hicks (music and lyrics) and Carl Danielson (book), is catchy and self-aware. My biggest complaint is the unclear style- the cast creates a silly, yet thought-provoking two-hour ride through the “near futuristic dystopia,” (a phrase that never fails to make me chuckle), but Danielson writes the show almost too well. By the end of Act 1, I cared about Kate Brick, a human resistance freedom fighter (played with a perfect mix of sensitivity and attitude by Kamela Dolinova), and her gal-pal Dehnise Compuserve (an enchanting and compelling turn by Emily Taradash). And whenever I became close to wanting more development out of Dolinova, I would be slapped to reality, or the future in this case, with a silly side-scene that broke up the momentum of the show (like Dolinova’s scene with Will Todisco, who played Tristan, Brick’s dead former lover). Todisco is a brilliant introduction to the play and a solid presence onstage as the Narrator and he first reminded me of the show’s similarities to Urinetown, the Musical, as a similar Officer Lockstock. Todisco’s scene with Dolinova lacks the same zing that Dolinova shares with Taradash, however. Honestly, Taradash’s character feels like the jilted lover, overlooked by Dolinova’s Brick and by the show’s writers. But the women’s duet, “I Don’t Do Love,” sparkles with poignancy and powerhouse vocals.

Not all of Hicks’s songs have the same charm. Act 1 is a long struggle with the actor’s adequately attempting to move from script to score without the audience realizing the lack of vocal ability. Katie Drexel stands out with a powerful range, but the style never feels right in her voice, and I would love to see her tackle less techno-pop and more of that killer soprano. Another stand-out is Julia Lunetta as the MC, the main computer who controls the “near futuristic dystopia” (never gets old). Lunetta is a powerhouse actor and singer and her strong acting scenes save Act 1 from a hideous demise. Thankfully, both Lunetta and Taradash are featured more prominently in fantastic acting scenes and more extensive vocal numbers in Act 2.

I was confused by the presence of a chorus. They feel underused, yet when they’re onstage, they seem superfluous. The chorus features some outstanding and energetic dancers at the end of Act 2, but the lip-syncing or mouth singing really threw me off. The dancing, though quite strong by a handful of actors, never seems to grow organically out of the script or score and, instead, the dancing just exists in some “techno-studded blechhiness.” Given the wonderful space at Club Oberon, I wish the production utilized the ability to mix the dancers in with the audience. While I think the directors and cast do a wonderful job of using the space, from the guard rails, to the side corners, I felt like I was watching a show instead of being immersed in this world. With such a compelling and hilarious romp that borders on the satirical, I think the audience would relate better with more interaction. Of course this all ties in with my conceptions of the play’s style, which I found to be very 21st century Brechtian, much like Urinetown.

I need to acknowledge Kay Coughlin’s fabulous lighting design; the show features some wonderfully innovative decisions. I can’t say the same for the sound design, which suffered some technical glitches quite early in the show, but quickly adapted to the space. The costumes have interesting touches, but show potential without full execution, especially for the chorus members.

The show does feature some extra-verbiage, as hinted above, but I didn’t understand the Nadpeeler’s middle of show song-and-dance number. I’m unclear whether I was annoyed at the inconsistency, the actor’s performance, or the lack of commitment to a style (was it supposed to be farcical?). There are other songs and scenes that I feel detract from what is sometimes a very creative and expressive mix of punchy one-liners and compelling rock ballads.

I’m not sure whether it was the cast’s commitment and energy, the fabulous voices of a select few actors, or Club Oberon’s wonderful atmosphere and drinks, but I found myself laughing in the right places and genuinely enjoying the wacky trip that Unreliable Narrator took me on. You should definitely pay the extra money for a table and get there early because if tables fill up quickly, you may end up having to make new friends. If you were a gamer or computer nerd in a past life, you have a taste for the eccentric and unknown, or just want to see a creative new production before it goes on a national tour to Provincetown and New York City, (just to name a few locations), you should check out 2010: Our Hideous Future: The Musical on Friday, July 29, 8pm at Club Oberon in Cambridge, MA.

The future is here, and Unreliable Narrator’s unique style is the new present in the Boston fringe theatre scene.