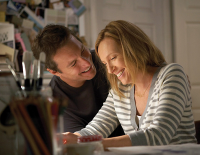 The new season is very sweet. The 8th season comedy also deserves some serious thanks for being one of the only shows with new episodes this week.

Captain Awesome
I’m watching season one of Chuck on DVD and I have to say that Captain Awesome is pretty awesome. I love that Chuck calls him Captain Awesome. When he taught Morgan how to tuck in his shirt- priceless.

The Last Night of the Yankee Dynasty
Buster Olney’s book about the 90s Yankees and their demise at the world series 2001 is a seriously fascinating read for any baseball fan.