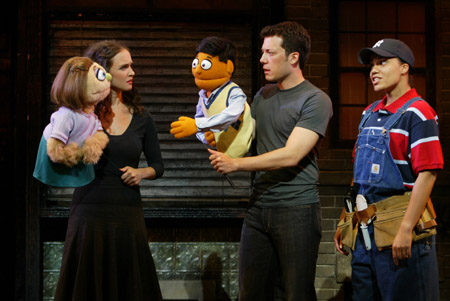 OK, after a week off for a family emergency, I’m back and trying to make up for lost time with a double dose of weekly obsessions…

Avenue Q
I just came home from seeing the touring production. I haven’t laughed that hard in a long time- go see it. The lead plays both Princeton and Rod perfectly, I swear he almost never leaves the stage- it’s amazing! Heartfelt, lovely, hysterical and honest.

Sandy and Kirsten Cohen
I’ve just started making my way through The OC. I’ve seen bits and pieces of it before but this is my first time committing to it fully. Other than “Mischa Barton really needs to learn how to act”, all I have to say is “the Cohen’s are awesome”. They may be the coolest parents ever but they still manage to embarrass their kids in hilarious ways- perfect!

Beating the Yankees
I was in the park last night as the Jays squeaked out a win against their formidable division rivals. The Yankees may be my second favourite team but there’s something awesome about watching them fall to 13 strikeouts by AJ Burnett and the best bullpen this side of the league.

Charlie Bartlett
This movie is awesome. I saw it twice in theatres and recently bought the DVD. Whoever said that Robert Downey Jr.’s big comeback year started with Iron Man clearly didn’t see this gem. Anton Yelchin in the lead role is reminiscent of a young Tom Cruise and Michael J Fox mixed together.

Rules of Engagement
In the latest Monday night rerun Oliver Hudson was mocked by a grade-school bully for having girlish good looks while Patrick Warburton dealt with unfortunately timed standing ovation problems. Always good for a laugh, this show is uber underrated.

Fall TV promos
What’s more exciting than constant reminders that in a couple of weeks you’ll have no time for work, studying or having a non-fiction life?

10 Things I Hate About You
I watched this movie the other day for about the 20th time and it was even funnier than I remembered. Shakespeare references at every turn, a stellar cast headed by the late great Heath Ledger and Julia Stiles (a personal favourite of mine), a plot stolen from a fabulous play (Taming of the Shrew), fun 90s nostalgia, Allison Janney, the perfect balance of heartfelt cheese and one of the greatest first kiss scenes of all time (Heath and Julia playing paintball)- what’s not to love?

The Stratford Festival of Canada
A couple weeks ago I saw an outstanding Romeo and Juliet. Last week I saw Hamlet featuring the always brilliant Adrienne Gould as Ophelia while her father Polonius stole every scene, played by an actor who Slings & Arrows fans will remember as season 2’s haughty Macbeth Henry Breedlove.

Vivah: fine Indian cuisine
The best butter chicken in the city is at the corner of Yonge and Heath St. (near St. Clair).

Mad About You
The best couple ever on television and a story about being in love not just falling in love, Mad About You is the counterargument to every Sam and Diane theorist out there. The perfect blend of adorable neurosis and committed understanding makes every fan want to be in love like Paul and Jamie. Seasons 1-3 are available on DVD as well as “The Mad About You Collection DVD”.

Caroline in the City available on DVD
Malcolm Gets’ pitch perfect Richard is enough to make me love this show. Add Amy Pietz and you’ve got me lined up the second season 1 became available.