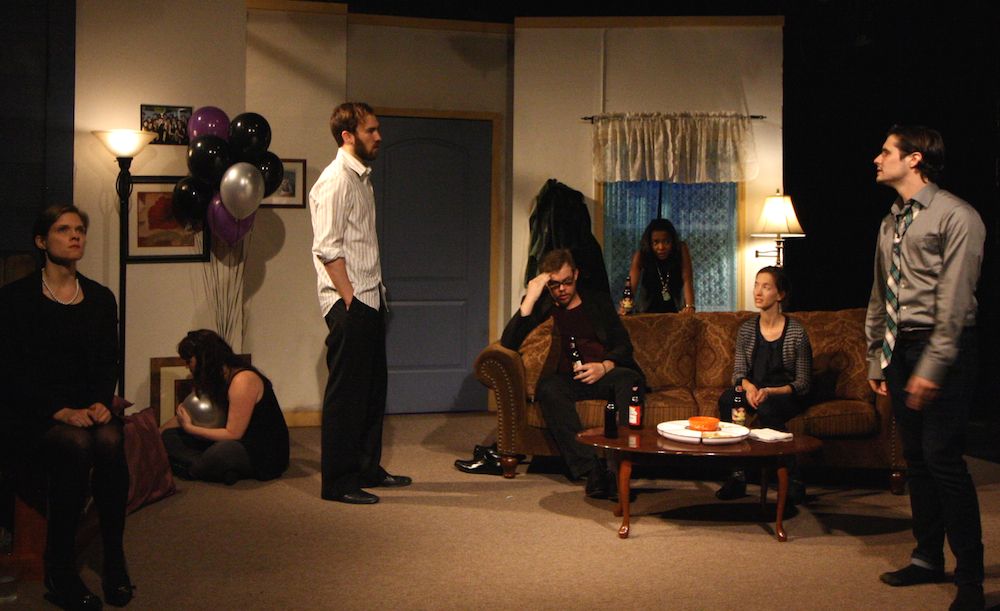 In The Event of My Death

Millennials, like me, who graduated from high school in the mid 2000s are hovering around the life cornerstone of “30” – no longer able to blame bad decisions on youth and expected, perhaps, to embrace the responsibilities of an adult life.* For many, this time of life includes a journey home to attend one’s 10-year high school reunion – to reconnect with old classmates who have often transformed considerably from whatever absurd generalization defined them in high school. The geeks, the jocks, the nerds, the drama kids – all changed and no longer so easy to categorize. For the characters in Lindsay Joy’s new play, In the Event of My Death, it is not a celebratory graduation milestone that brings old friends back together but, rather, the death of one of their own. Although Joy’s narrative is strong and sharply written, it is her entrancingly authentic and delicately crafted characters that define the emotional experience that is In the Event of My Death.

The play opens as Peter returns home with a bottle of booze in one hand and a worn look. As he frantically cleans, he is joined by his friend, Amber, who demands that they break open the alcohol in anticipation of their mutual friends’ arrivals at what is meant to be a wake – a commiseration over the suicide of their high school classmate. As more guests arrive, the group engages in fond remembrances of their fallen friend, confronts deep-buried insecurities and feuds from their high school years, and learns that, despite their long history, it is possible that none of them really know much about each other. At least not about who each of them has become (or who each of them always was but was too afraid to reveal). This group of high school friends could very well be mine. Or yours. But Joy avoids the pitfalls of stifling her creations with trite “high school” labels. Yes, there is a geek, a prom queen, an awkward girl who loves Harry Potter, and a gay best friend. But, In the Event of My Death beautifully encapsulates why those labels fail to do a person justice – why they (thankfully) do not often follow young adults beyond the shallow void of high school. Joy maintains a welcome emotional balance, writing scenes such that the somber moments in the play are often punctuated with light-hearted anecdotes, which give the narrative a meaningful authenticity. The pacing feels a bit slow at times due to repetitive content, but these lulls are a relatively minor problem in an otherwise well-crafted play.

Stable Cable Lab Co.’s production of In the Event of My Death, directed by the very capable Padraic Lillis, proves that an off Off-Broadway production need not appear to have a low production value. Scenic designer Doss Freel does an admirable job of transforming the cozy performance space into a starter apartment fit for a young bachelor, and Irma Brainard’s costume design befits both the setting and the characters crafted by Joy. Moreover, Katy Atwell’s lighting design and Andy Evan Cohen’s sound design both set the mood and transition the audience into and out of the action (with an on point 1990s music mix greeting the audience upon arrival).

The technical artists are joined in this production by a strong ensemble of actors who capture the depth of emotion of their respective artistic wards. Of particular note is Corey Kosel as the deceased man’s boyfriend, Trevor, who both captivates with his boyish charm and gleeful playfulness onstage and also thoughtfully conveys Trevor’s emotional collapse with a purity that had this critic tearing up just a bit. Joining Kosel onstage are Lisa Jill Anderson as the delightfully bitter, strung-out and jaded jokester of the group, Lillith Fallon as an icy and stilted older sister tormented by her brother’s untimely demise, and Samantha Strelitz as a former addict and prom queen who cannot escape her bullying past, despite her best efforts to showcase that she, too, has evolved into someone very different from her high school days. Rounding out this talented group is Breanna Foister, Ian Poake, John Racioppo, and Kara Young, all of whom give singular performances while nicely complimenting each other as acting partners on stage.

Ultimately, In the Event of My Death encapsulates the Millennial experience. Our formative teenage years saw the explosion of social media, but many of us are less connected to those that we care about now than ever before. Society became seemingly more polarized in our young adulthood, often leading to disenchantment, frustration and a sense of social ostracization. Saddled with loan debt and unable to find jobs that pay a living wage, many of us have settled for what is easy, rather than chasing the dreams that we were supposed to pursue as young overachievers with stellar grades and long resumes highlighting our countless athletic, artistic, service-oriented and leadership successes. And, despite these struggles, In the Event of My Death suggests that there is time to change. Time to connect with each other. Time to accept one another. Time to chase dreams. It is a poignant point worth contemplating.