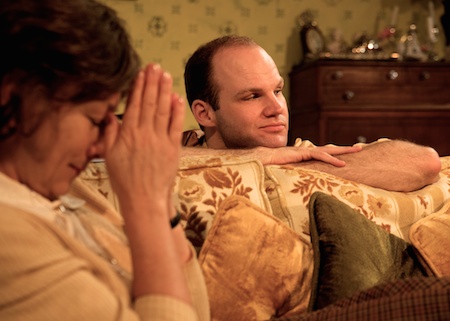 Dennis Potter’s Brimstone and Treacle was considered controversial when it was first written in 1976. Much has changed in the past 40 years, and yet this is still a controversial play in terms of its depiction of sexual violence and the performance of disability. As such, the question why stage this play was at the front of my thoughts throughout Precisely Peter Productions’ Brimstone and Treacle, which opened at the underrated Sidemart Theatrical Grocery last week. While I was certainly engaged by Potter’s eloquent script and the tone of this dark thriller, the production overall missed the mark. What could have been a truly chilling mix of abusive power and dark comedy (brimstone and treacle) came across as merely a strangely disjointed kitchen sink drama, which, disappointingly seemed uninterested in the potentially powerful message in this plays problematic premise and uncomfortable politics.

Brimstone and Treacle features Mr. and Mrs Bates—an elderly couple whose lives are consumed by their daughter, Patricia, who was left severely disabled after a hit-and-run two years previously. Patricia spends the entire play strapped to a bed in the living room, while her seemly unintelligible moans, shrieks and gargles punctuate her parent’s domestic arguments. Into all this steps Martin Taylor, a stranger who claims to be an old friend, and indeed potential fiancée to Patricia, there to help take care of the girl he once loved. And yet, Martin’s glances towards the audience, as if we are ‘in on the joke’, tell us quickly that he is not all that he seems. As such, we watch the young man slowly manipulate his way into the home of Mr. and Mrs. Bates, appealing to her need for a break and to his bigotry. After it is settled that Martin will stay, Mrs. Bates says of Patty’s moans, “It’s almost as if she’s trying to tell us she’s pleased,” to which Mr. Bates replies, “You might as well say she’s trying to warn us.”

This is the brilliance of Brimstone and Treacle. A wolf in sheep’s clothing, Martin infiltrates the home demonstrating how far angels might fall, if we only give them a push. Playing this devil incarnate, Scott Garland brought an energy to the role of Martin that acted as the powder keg for the entire production. His elegant movements, along with his beautiful singing voice was a shocking contrast to mundane sinister side of Martin. What he lacked in subtly he more than made up for in physicality and energy. He was well placed next to the totally endearing Brigitte Robinson as Amy Bates. She perfectly portrayed the overworked mother, and was, surprisingly, the only one to nail the English accent. These two carried the show; theirs were some of the more pleasant moments to watch.

These moments, however, were few and far between. Disability was staged and portrayed problematically—Patricia (Nicole Wilson) flailed, yelled and gabbed wide-mouth and crossed-eyed for the majority of the play. Further, the decision to portray the infamous scene of sexual violence which occurs at the end of act one should be questioned. First, while I’m not always an advocate for ‘trigger warnings,’ there is a certain amount of sensitivity needed here to navigate a difficult scene such as this. This was woefully absent, even after a request for such a thing was put out on the facebook event page. Second, there are ways of staging sexual violence that are more interesting and creative, and affective than simply staging it realistically. As such, the play does not diverge much from the BBC version from 1976. Why then, do this play now? Where is the attention or intention to speak to the current theatrical or political atmosphere? Why do this play, why do it now, and why do a British play in Toronto? None of these questions were answered or addressed in Brimstone and Treacle. As such, we were left with a play that had very little to say.

Brimstone and treacle was a nasty cure-all in Nicholas Nickleby, the novel by Charles Dickens. This is the perfect metaphor for the show: the script suggests a complex relationship between good and evil, between heaven and hell. It suggests that we can all be fallen angels, that “the devil is walking up and down, there’s no doubt about it.” In the final moments of the play, we might ask if devil’s been in this house all along, and just needed someone to materialize him into being. Brimstone and Treacle has fascinating moments of introspection. Moments that may instigate a double take—one not just at the content of the play, but at society in its own right. It seems to ask what it really means to be living in hell—personally, politically, and emotionally. In a time of #BlackLivesMatter protests raging through the United States in a way that uncannily resonates with one of Martin’s final monologues (performed brilliantly by Garland), we might ask not why this play was done, but why it was done ‘straight’. The problem for me was not in the play itself, but why this staging ignored its politics of race, rape and religion that are still present today. As Potter writes in the preface to the published editions of the play, “I recall writing (and the words now make me shudder) that the only meaningful sacrament left to human beings was for them to gather in the streets in order to be sick together, splashing vomit on the paving stones as the final and most eloquent plea to an apparently deaf, dumb and blind God.” This was not a play that made me shudder or sick. And with its upsetting content and today’s politics, it really should have. Brimstone and Treacle played ‘straight’ is neither stingingly hot, or darkly sweet, it’s just boring.