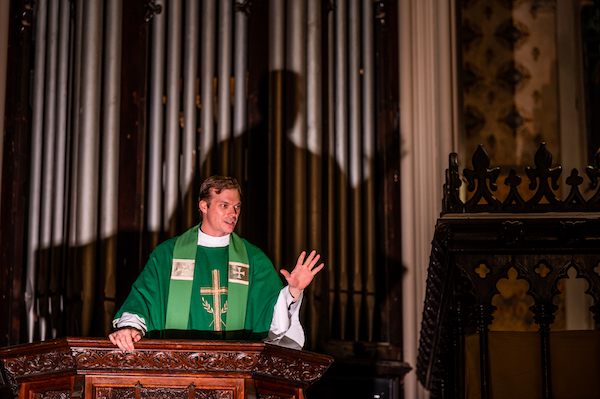 John Patrick Shanley’s difficult drama Doubt has aged oddly. First produced in 2004, one year after the Boston Globe’s Spotlight team won a Pulitzer for its reporting on abuses in the Catholic Church, the play twists itself into knots attempting to keep as much, ahem, doubt as possible alive in the audience’s mind, presumably as a kind of immersive intellectual torture feature. I am generally not opposed to such torture and a lack of concrete answers is a realistic, if unsatisfying, quality for a piece of fiction to have. Further moral complication is added when the character of Mrs. Muller defies all simple expectations for maternal behaviour and introduces a painful intersectional argument into a brutal no-win situation. It’s easy to see how in a certain time and place this complex ambiguity was seen as masterful. In 2022 it doesn’t work nearly so well.

In its first few years of life, versions of this script were directed by Roman Polanski and produced by Harvey Weinstein’s Miramax, folks whom I imagine were fairly keen on fully embracing the “he could be innocent, we’ll never truly know” element of Shanley’s storytelling. It’s hard to blame new company Breaking & Entering Theatre for not showing the same level of comfort with that particular angle on the material. Their production (on through November 13th at The Church of  the Holy Trinity) feels pretty damning in its case against Father Flynn. That’s fair, and likely the more responsible outcome when staging this dated text in a modern context; the last thing we need is more narratives that in any way could be encouraging to abusers. But a strong feeling of clarity at the end of Doubt is bizarrely even more frustrating than the torture of uncertainty. The play is structured for ambiguity and the loss of it relieves the play’s most valuable pressure and therefore its unique impact, to say nothing of how the hard truth undermines Mrs. Muller’s inner conflict and paints her as more simplistically a bad mother (Kim Nelson is excellent in the role but the modern Toronto theatre audience is moralistic and unlikely to make room for Mrs. Muller’s humanity when the truth is more binary than intended). If we all leave the theatre in agreement of guilt- as the bent of this production in our particular social moment is wont to have us do- Doubt is merely a very sad play about bad behaviour and the helplessness of the righteous.

A little of Doubt‘s immersive feeling is recaptured by the Holy Trinity setting. Sitting in a real church as Brian Bisson’s Father Flynn preaches in Lara Barry’s highly realistic costumes, I quickly found myself participating in the Pavlovian responses of a good Catholic girl. In his moments of preaching, both high on the pulpit and among the crowd at basketball practice, Bisson easily captures the charisma and unspoken authority of a beloved priest, an absolutely necessary quality for the danger of the piece. Unfortunately in emotional confrontations and difficult dialogues he, as well as Emma Nelles as Flynn’s naive supporter Sister James, are vastly outmatched by the linchpin performance of Deborah Drakeford as Sister Aloysius. By far the most seasoned theatre performer in the ensemble, Drakeford’s reasonable countenance and nuanced performance add so much credibility to Aloysius that it was unlikely her castmates could have bloomed the seeds of doubt even if they’d been fully determined to plant them. A troubling amount of the original ambiguity of the text rests in the view of Aloysius as a hard crusading shrew out to take down a man she simply does not like. Drakeford plays her as more human than that and the script can’t handle the weight of that responsible choice.

Breaking & Entering is a very welcome new addition to Toronto’s limping post-Covid independent theatre scene. Their interest in challenging texts and thoughtful production choices bode very well for future work. This particular piece, though the production certainly has its impactful moments, I don’t think does justice to their full potential. Doubt was a play for its time and place but it feels a little lost in the modern landscape, unable to be what it once was and not enough as it now is.