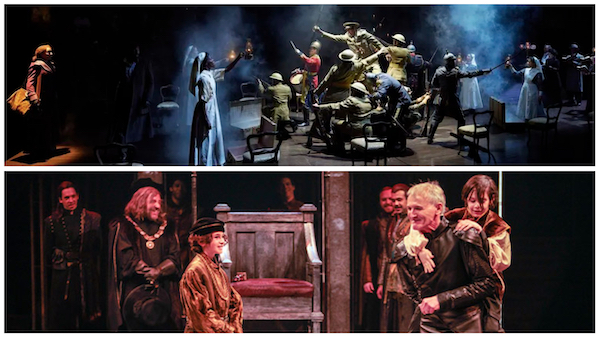 Stratford programmed a duo of dark and twisty Shakespeare plays to launch its refurbished Tom Patterson theatre this season. Though the wildly expensive renovation seems like a huge change when you first enter the beautiful new building, the actual experience of watching a play on the relatively similar stage remains pretty much the same. The seats are perhaps a bit more comfortable. But the Tom Patterson is still a mid-sized traverse stage where you’re far more likely to see All’s Well that Ends Well than Hamlet. That’s not necessarily a bad thing. The programming at the TP tends to be a bit more adventurous than the mainstage, a little more off the beaten track or a little kookier; often it’s material the director wants the audience close for. That manifested itself in contrasting ways this year.

All’s Well That Ends Well is one of those lesser known Shakespeare comedies that’s rarely produced because most people don’t think it’s very good. I kind of love when the festival takes on one of these, it feels a bit like there’s nowhere to go but up. So up they went! Scott Wentworth’s direction is energetic and fun, harnessing the play’s complicated scope to create some great visuals and giving the world of the play great depth. Jessica B Hill is a modern, sympathetic, and fun leading lady who easily leads the action and holds her ground as a complex protagonist even when André Sills threatens to steal her show (he’s perfectly cast here as Lavatch, because charm and sass are his secret best skills). I’m still not sold on Jordin Hall as a leading man but I’m also not sold on Bertram as an interesting character so maybe the lack of spark was purposeful. Overall, All’s Well is a delightful surprise, a well-executed chance to see a play that still feels undiscovered.

Richard III on the other hand is much-explored territory despite the play’s underreported shagginess and Antoni Cimolino’s production doesn’t find much new in it. The stage is set at the excavation site where Richard III’s remains were found in 2012. Topical graffiti draws predictable parallels between the consensus geopolitical villains of our time and the titular Richard. Then Colm Feore literally rises from Richard’s grave and we’re thrown back to a remarkably standard period production, only to return to this modern frame in time for an eye-roll-inducing rewritten final speech from Richmond (a capable Jamie Mac in a thankless role) who now has to share the stage with his wife Elizabeth. I appreciate that director Cimolino clearly feels that it’s a problem that Elizabeth is so spoken of without ever getting to speak for herself but the play has its limits and this final scene is an attempt to carve something out of nothing while robbing from Richmond, who does not have the character development to spare. It’s a typically boring Cimolino production with little of directorial interest beyond the flashy pyrotechnics of the heavily cut ghost scene (the fact that the fire alarm went off right after this scene at the performance I attended could, I suppose, be a coincidence; maybe it was the ghosts).

Whether or not this production works for you will come down to Richard, as Richard III almost always does. Personally, I haven’t been into Feore since about 2010. I find him a little performative, like I can see the effort. I want to know there is effort, but I really don’t want to see it. Feore’s always been a really physical actor; he’s been quoted likening the performance of classical theatre to traditional athletics. And he’s still as energetic, almost impish, as ever. As he ages, this quality is getting less and less useful. I’m sure it’s literally useful in that he’s got tons of stamina, but it reads as false when the roles he’s being cast in are characters with less physical ability. Not unlike his criminally young King Lear, Feore’s Richard is far too hearty and he has to compensate with performed weakness so perfect it can’t be anything but totally fake. Feore is a classic leading man, a lover, one of the festival’s great heroes. It may be a leading role but Richard is a character part, you shouldn’t just give him to whatever big name hasn’t done it yet.

Stratford marketing is a hyper-practical affair. They know where the money is and the Globe & Mail-reading retirees love a familiar face and a familiar title. My parents saw exactly one Stratford production this year- I’ll give you one guess which one it was. It’s a shame, though. I’d love to see a big push on behalf of All’s Well that Ends Well. It’s weird and messy but it’s interesting and Richard just plain isn’t.