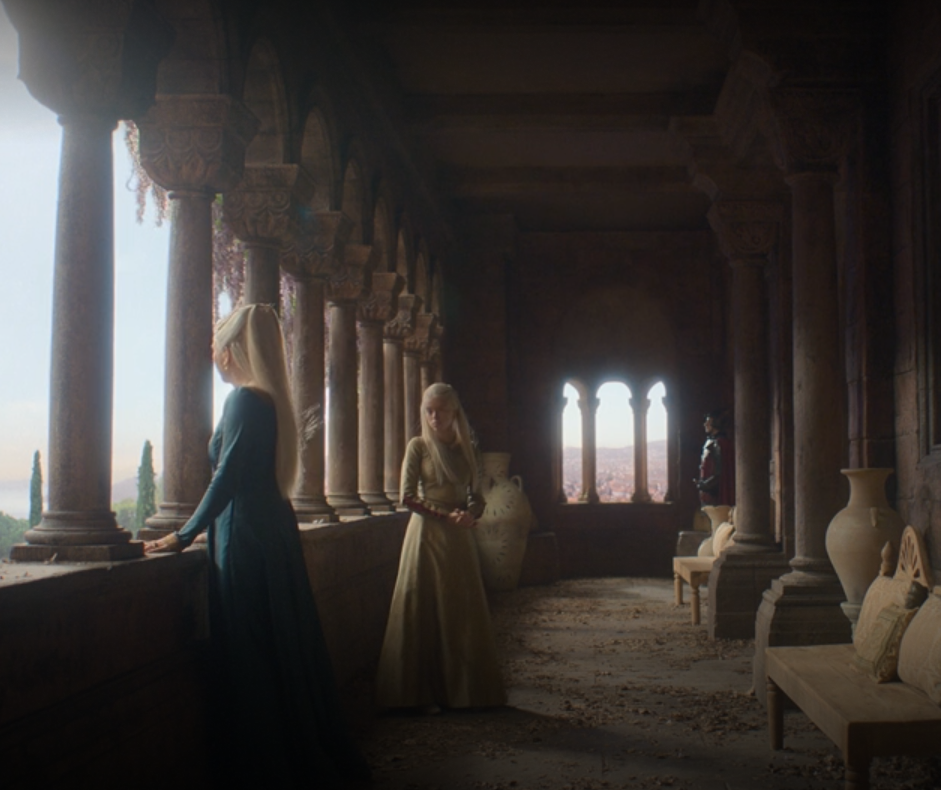 When I was a child, I loved Quantum Leap. I watched it for the first time when I was at a neighbor’s house, catsitting for the largest orange feline I’d ever seen. He and I would stare at a little brown television, sprawled over the carpet, devouring episode after episode of time-jumping fun.

House of the Dragon has returned that joy to me. Not many shows manage the jumps in time well, as the practical realities of managing actors of various ages, fixed backgrounds and settings, and a TV production budget/timeline often present barriers. But HBO seems to have dipped deeper than usual into their bottomless bank account, because episode two of HOD takes place six months after the first. Not a lot episodes of Game of Thrones can claim that big of a jump, unless you count the miles Gendry must have been paddling in that dinghy.

It’s not just that they are doing it, they are doing it well. The events leading up to the Targaryen civil war in Westeros are precipitous moments, little raindrops that bring on the flood. It would have been easy for them to set up a mid-season slump where tensions mount, deals are struck, but very little substantive plot happens. Call me a dreamer, but I don’t think HOD is doing that. The high moment of “The Rogue Prince” is the standoff between Rhaenyra and Daemon. Two opposing dragons, two opposing groups of armed men, and the two Targaryens between them. It is an incredible, iconic moment, and could have easily been something they waited to give us.

But as lucky as we are to see dragons in every episode, it’s not the only high moment. Viserys’ announcement of his betrothal to Alicent Hightower is a huge upheaval, directly pushing Corlys Valeryon into the smug arms of Daemon Targaryen. Heavy-handed with the foreshadowing, sure, but it also sets the stage for a widening rift between Alicent and Rhaenyra. The selection of Ser Criston Cole as the newest member of the Kingsguard is another significant moment, as we see the Princess starting to make use of her position as heir. The second episode of the season is rife with character development, strong dialogue and – because it bears repeating – dragons, dragon eggs, and dragonriding.

I want to focus on one particular high moment in this high drama, the conversation between Princess Rhaenys and Princess Rhaenyra. This scene is so good, it’s almost impossible this discourse between two women could have been conceived of by the nearly all-male production and writing teams. The scene has layers – the Queen Who Never Was and the Queen Who Never Will Be – and more importantly, it is the most characterful moment in the episode. Rhaenyra believes the realm said no to Rhaenys, that it will not say no to her, that she can change the world. Rhaenys believes she knows better, because she lived through it, she was witness to the triumph of patriarchy. Both are right and wrong in their own way, but it is such an excellent progression from Daenerys, from Cersei, from the host of women conquerors and queens in GOT.

I know, it’s hard to see that in the context of the birth trauma the first episode forced upon us. HOD so far is messy and violent and uncaring, but episode two was really, unequivocally good television. The story is moving forward. We are learning about the history of Old Valyria, we are watching more characters speaking Valyrian and enacting high drama in King’s Landing, we are discovering Targaryen custom and lore, all in the same space as beginning a civil war. I don’t want to stop taking HOD to task when they cross a line, but I also want to hold space for what they do well. And this was done well.

So let’s look to where we are leaping to next! The preview for the next week’s episode promises a battle of some kind, more bloodshed than we’ve had before this early in a season of GOT. The name “Aegon” is mentioned around a pregnant-looking Alicent, and fanboys everywhere lost their collective minds when they heard. Clearly, we are moving forward another couple of months (at least!), and I refuse to think that’s not a big deal. Have no fear, friends. Let the time fly.