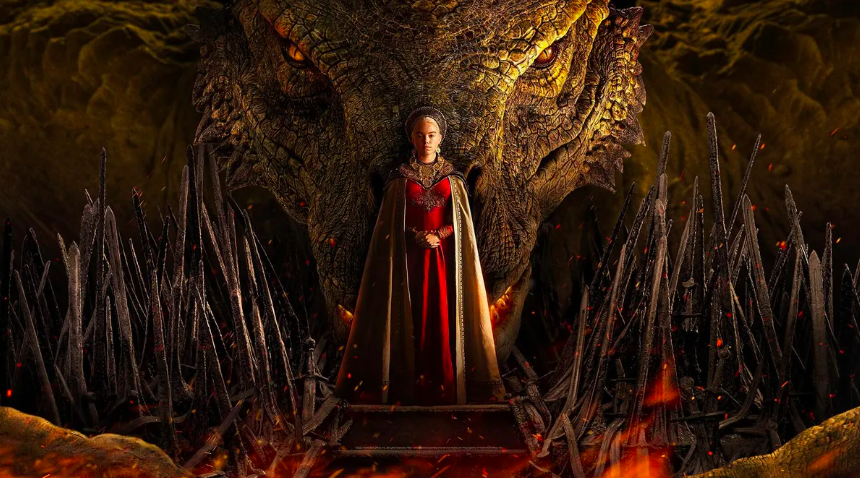 Hello readers! As the world of Westeros returns to our screens, so too do I re-emerge to write reviews and titillate your senses. I’m back and more jocular than ever, writing reviews that you’re sure to love, hate or ignore. Let’s breathe, and begin.

Note: there are spoilers ahead.

House of the Dragon has been getting major hype ever since it was announced a few years back. There’s been excitement, but also anxiety, given how the final season of Game of Thrones ended. The new show is a prequel, expanding the story of the Targaryen civil war well known to the fans. Many were calmed to see George R. R. Martin back in his role as producer, to help guide the story as he intended it. So while internally, I feared how the show might fail, externally I was constantly talking to friends and family about how excited I was to watch this show.

Watching the first episode, “The Heirs of the Dragon,” I felt a small thrill. Seeing the Red Keep again, seeing the court meet at Harrenhall – even just watching dragons flying over King’s Landing gave me the sense of return. We’re back! Back in Westeros, back in this fantasy crossover hit that fascinates and entertains, back to familiar tropes and back to high drama. The improved CGI is unmistakable, the casting feels appropriate, and the overall production value doesn’t seem to be any less than what was spent on GOT. Much of the first episode is spent on grounding us in location, reminding us of the Red Keep and the maze-like structure of King’s Landing.

But there is an added bonus – the sense of time! This story takes place 172 years before the birth of Daenerys Targaryen, nearly two centuries before the start of the first season of GOT. And visually, it feels like it – these are the halcyon days, the height of peace and prosperity in the Seven Kingdoms. There are 10 dragons in the dynasty at the start of this season, which is usually a pretty good barometer for reasons to watch the show. Rhaenyra Targaryen is a great character to watch, and I’m looking forward to Emma D’Arcy’s work in this role.

The attention to the sense of time even creeps into wardrobe choices. The armor of the knights seems more ornamented, decorated, and less utilitarian and grim. The costumes for many Targaryens, Rhaenyra especially, seem almost Russian in aspect, like they are all tsars and tsarinas. Accompanying this is a lot of ritual and ceremony that feels grounding, not just grounding us in time but in the sense of the baroqueness of the Targaryens. They are the blood of Old Valyria, the greatest conquerors the world have ever known, the wisdom and beauty of an ancient lineage. And yet, even King Viserys acknowledges that without the dragons, they would be just like everyone else.

So yes, I was happy to be grounded in a familiar-yet-new world. I was happy to see this Targaryen drama on display before me. But as the story played out, moments of tension began to play out. The question of the heir, the emphasis on the unborn son, and ultimately the horrible death of Aemma brought to surface one of my oldest and worst anxieties about the GOT-verse.

The original series had a problem with using rape as a plot device, especially in the first season. If you recall, Daenerys was basically sold in marriage to Khal Drogo in the first episode. He rapes her – there’s no other word for it, no other version of what happens that is true. He continues the abuse until Dany “learns how to make him happy,” another problematic part of the show. As the story goes on, over the seasons, this becomes part of the Dragon Queen’s narrative and appeal. This person who has been through so much, suffered and endured, is never willing to be taken advantage of. It becomes just another part of her story, another title to list after “the Unburnt.” It only gets worse as other characters, like Sansa, suffer in similar ways. Rape became a narrative tool of the show, a way to advance or enhance the plot, and the producers and writers caught a lot of flak for it. It is repugnant to sensationalize and worse to make it incidental. But they kept doing it, using trauma as a tool to tell a story.

When Aemma was forced into delivering her child at the cost of her own life, I was horrified. It felt very much like we were going through the same thing again. Both mother and child end up passing, and this provides the context for the outset of the civil war. But what is the context of the times we are living in? We are currently in a war over reproductive rights. Women are being forced to bear children at the cost of their own lives. Television shows that are airing now are spending time and effort to be conversant in what’s happening now, and you can certainly see parallels between the Hilary Clinton campaign and “The Queen Who Never Was” in HOD.

But that doesn’t give them carte blanche to use trauma as a storytelling tool. Here even, “tool” feels less apt than “cudgel.” The viewer watches the procedure of the maesters, literally cutting Queen Aemma open to retrieve the male heir. We have to hear her scream, watch the fear rise in her eyes, and see Viserys, described as a “warm, kind and decent man,” kill his wife to have a son. It’s one thing to present the viewer with something that’s hard to watch, as the producers of GOT have given us time and time again. It’s another thing entirely to put trauma on display like this, to play upon our political landscape and tell us, “that’s how it all begins, she’s dead, now civil war is next.” This is crossing a line.

There are constant sexist undertones and overtones being repeated in both shows. Both show us people resisting being ruled by a woman. There is constant doubt thrown at them, ridicule and shame. Women are never seen as fit rulers, warriors or court officials. I have no doubt HOD will continue in this vein, as the rivalry between Daemon and Rhaenyra is the story R. R. Martin wrote. But we have to stop using violence against women as a way to advance or begin a story. HBO shows are notorious for sex, violence and sexual violence. But the producers of HOD and GOT have a penchant for making them crucial to the narrative, so crucial that the heightened drama and tension create extreme distress and trauma. We deserve better. We have to hold our storytellers to a higher standard.