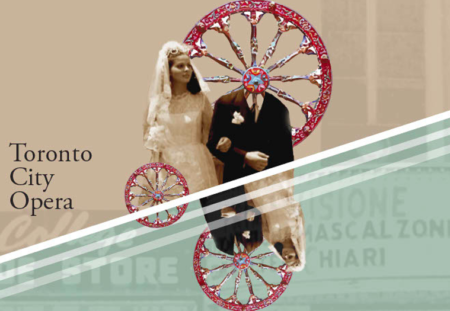 It’s hard to explain exactly what to expect from a Toronto City Opera performance. Up front, you have a very strong 5-person principal cast carrying the story and main musical workload. These are professionally trained classical singers and, save a few wobbles here and there, they are very much up to the task of Mascagni’s melodic score. By creating opportunities for early-career performers to sing artistically rewarding, resume-boosting roles in full productions, TCO is able to attract the talent to punch above their weight in terms of the quality of performance you can expect from the leads. Angela Maria Sanchez in the role of Santuzza is a perfect example of a still fairly green artist whose gorgeous tone and stirring emotionality may have gotten lost in a bigger company but here she’s able to shine in the standout role of the production.

The other side of the coin is Toronto City Opera’s chorus, a sprawling ensemble of local enthusiasts who are very much not professionals. If you approach the production as a piece of community theatre, this group is incredibly endearing. There’s a really beautiful joy to this ensemble of mostly retirees who’ve taken their love of opera off the couch and chosen to get involved. Most hit neither their notes nor their marks with much consistency but their presence fills out the world of the piece and it’s hard not to fall in love with their earnest dedication to Stephen Carr’s simple direction.

So the Toronto City Opera experience is a mixed bag, or rather a sugary dessert with two distinct flavours, both satisfying in their own way. In two-hander scenes and standalone arias, Cavalleria Rusticana is a solid piece of independent opera with strong performances from up and comers with the so-so accoutrement of a somewhat underfunded company (scaled back orchestrations performed somewhat rockily, simple projections and little else in the way of stage design). And, behind those performances, a charming but very amateur chorus who’s just happy to be there. The latter does no favours for Mascagni’s score but you’d have to be a real grump for them to do nothing for your heart.