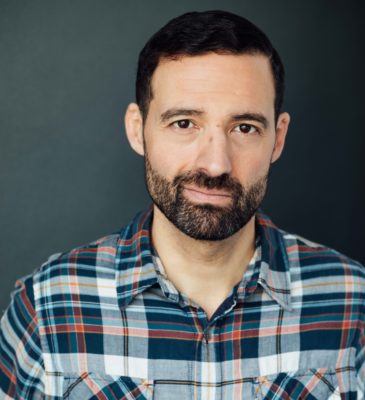 “Daniel Stolfi is an actor, writer, producer, author and Canadian Comedy Award Winning comedian. He is best known for his work in the award winning, one-person cross- country hit, Cancer Can’t Dance Like This. Some of Daniel’s TV, Film and Theatre credits include: The Anger in Ernest & Ernestine, Finding Funny, A Really Bad Play – the Musical and his latest comedy special, Another Trip Around the Sun. He can also be seen on The Detectives (CBC), Mr. D (CBC), The award winning digital series, The Amazing Gayl Pile (CBC GEM), the Netflix feature film, Anon, the TV Dramas, Suits (USA Network), Orphan Black (BBC America), a recurring role on Frankie Drake Mysteries (CBC) and most recently Babe Nations latest feature film Alice Darling. Daniel is a Graduate of the University of Guelph Theatre Program, The Second City Conservatory Program and has studied comedy in New York City with the Upright Citizens Brigade”.

Writing just sort of happened organically for me. It was never my intention to be a writer per se. I am an actor and comedian first and always wrote for my brand of comedy and storytelling. I started with sketch comedy, stand-up comedy, one-act plays and then film and television scripts. This helped me hone my craft. Writing a book, a memoir of all things, was never something I thought I’d do! My grades in high school English were awful. Just… awful. Couldn’t write an essay or short story to save my life! No one ever encouraged me to be a writer. I think I was voted most likely to be the next Much Music VJ in my high school yearbook. But over time, I got better at it. I also realised that there are these magical people called “Editors” and they can really help smooth out what you’re trying to say. I always have ideas. Getting them on the page in a cohesive way is the challenging part. I welcome that challenge now and I’ve come to accept that I have to trust others but also myself as I write and rewrite my work.

I was in Kindergarten. I wrote a story about a bear and a girl. It wasn’t Goldilocks and The Three Bears or anything, but I remember the teacher being really impressed. I was in French Immersion so I think the story was in French too!

I write all the time. Whenever I can. Even if I know that what I’m writing will never be seen or heard, I just write. I write short stories, sketches and stand-up comedy bits. I type it in my phone or on my laptop or write it in my journal. I have a lot of documents just sitting on my computer that have never been produced or shared with anyone. I also read. When I was crafting my memoir I made sure to read a lot of other memoirs. I couldn’t count how many. It allowed me to find originality in my own work. Reading other voices and then trusting mine as unique and worthy. Why can’t I write a memoir? Of course I can write a memoir.

I don’t know if I can honestly say that I have any specific literary influences. I am a fan of comedy, memoir, the odd self-help book and I love fictional books too, especially mystery suspense type novels. I’m the kind of person who will take book recommendations from others to find that hidden gem. I read a wide range of content, so I often find myself reading whatever is good at the time. My favourite books are probably The Da Vinci Code by Dan Brown, The Subtle Art of Not Giving a F*ck by Mark Manson, Educated by Tara Westover… but the list goes on. I love books that are page-turners. The writing has to be clean and easy with a flow that is always moving the story forward. Books that you don’t want to put down. “Just one more chapter” type books. I try to emulate that style in my writing too.

I think my work is raw and unapologetic. I write my truth. Sometimes the truth hurts, but most of the time it can be really funny too. That’s where the best stories and comedy comes from in my opinion. I try to keep my writing moving with pace and rhythm. I want the reader to really hear my voice and the voices I create. I think my work is surprising at times too. I try to keep readers and audiences wondering what will happen next. I like leaving little clues or hints in my writing and then revealing something later on that refers to those clues and hints. It’s fun for audiences and readers to be in on the joke or game. I want readers to come on the ride with me. I don’t just want them to observe the ride from the sidelines.

It really depends on what I’m writing. If I’m writing a joke for stand-up, I’ll start by running it over and over in my head until it’s almost to memory before I write it down. Then I work it over and over again on the page. With longer pieces like a play or my book, I start by barfing out as much stuff on the screen/page as possible. I go over it a thousand times, combing out the knots like I’m combing out my curly hair. I usually have 10 – 20 drafts depending on the type of project before I can say that it is fully ready. Then I get a few sets of eyes on it. I apply the notes, or don’t and then re read and write it over and over again until I am bored of it. Once I’m bored of reading it, or rehearsing it, I know it’s ready to be shared with a wider audience.

My most recent and only book to date is titled, The Comedian vs Cancer – The Show Must Go On. It is a memoir recounting my two-year battle with cancer when I was 25. I originally wrote, produced and performed a solo show called, Cancer Can’t Dance Like This which had a lot of success over the course of ten years from 2009 – 2019. The show won the Canadian Comedy Award for best solo show, toured across the country and helped raise over $100,000.00 for cancer related charities and organisations. My book not only chronicles my journey through cancer but it also explores the journey of a young comedian wanting to get back on stage again in hopes to perform one last time. All encompassing, it’s a story about hope, love, friends, family, perseverance, and perspective… and of course the cancer experience of a young comedian. It’s currently available on Amazon, Indigo, Kindle and Kobo J .

My book just came out so I am currently in the thick of promoting it and getting the word out there! Very exciting, but also soooo scary!! This is my first book! AHHH! Creatively, my writing and producing partner/wife are developing some original concepts for television. We are always applying for grants and funding to get that next short film, series or feature made. Fingers crossed! I am always writing comedy for the stage as well and hoping to get back on stage again soon when things open up… (by the time you read this, I hope we’re open again). I’ve been taking the live performance slowly as we welcomed our daughter into the world during the pandemic. So I’m sticking to pitching ideas and writing comedy from the comfort of home for the moment.