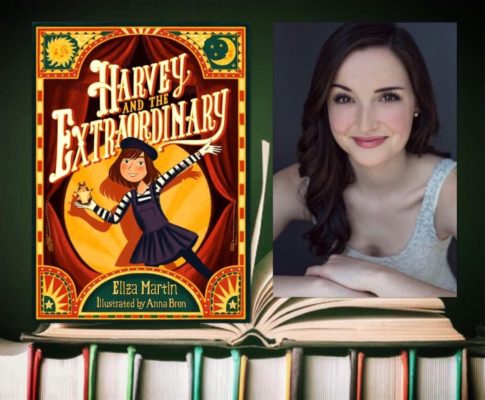 “Eliza Martin is an award-winning theatre artist, writer, arts educator, and child and youth care counsellor (M.A. CYC). On-stage Eliza works as a professional actor and solo performer, having written and performed three one-woman shows: O (NYC United Solo Award Best Satire, All About Solo, Critics’ Choice), Harvey & The Extraordinary (My Entertainment World – 2018 Critics’ Pick Award Nominee, Outstanding Solo Performance) and BLOOM (Bad Hats Theatre, 2019 Creator-in-Residence). Her second play Harvey and the Extraordinary was adapted into a children’s novel and published by Annick Press (2021). Eliza holds an Honours Bachelor of Arts (Theatre Specialist, English Major) from the Theatre and Drama Studies program at the University of Toronto and Sheridan College, and a Master of Arts (Child and Youth Care) from X University. When not on-stage or scribbling, she can be found working in child and youth mental health, serving as the Programs and Services Coordinator of Purple Carrots Drama Studio, and facilitating creative workshops around Toronto.”

I think I’ve always known I wanted to be a writer, or certainly an artist. I’ve been in love with all things stage and story for as long as I can remember, and like the main character of Harvey and the Extraordinary, I too had a major mime phase. My siblings and I were constantly playing wild make believe games, making up dance routines, and just generally being creative. I was also a giant book worm, so it all felt like a very natural progression!

Since I can remember I kept a notebook, and loved writing stories. I entered a poetry contest in elementary school and had a poem of mine printed in a Canadian children’s collection (so I’m sorry to say it can still be found). It was a poem about a willow tree that was cut down in my grandparents backyard. I also tried to adapt a few of Shakespeare’s plays in the sixth grade and very bossily forced my friends to perform in them! I always played a lead and directed as well. Very Kenneth Branagh.

I graduated from Cardinal Carter Academy for the Arts, and had the privilege of studying at the University of Toronto and Sheridan College. As a young person I was very fortunate to have the support and encouragement of many teachers. I had a handful of drama and English teachers especially that helped to build my confidence and skills. I was very grateful to those teachers who read my stories (on top of piles of marking) and offered me edits and notes. I also learned a ton from smart friends with similar interests (all of the book and drama-related clubs). I read as much as I could, and created as much as I could.

This is such a tough question. Growing up I was a bit of a nerd for the classics –books and plays – and I particularly focused on female authors and playwrights. When it came to children’s literature however, I was hugely influenced by L.M. Montgomery, and Kit Pearson. I think Awake and Dreaming may be a pretty near perfect book. I also adored Deborah Ellis, Phoebe Gilman, Beverly Cleary, Jean Little, and Tamora Pierce. I’m a very big admirer of Susan Coyne’s work and career. These days in the kidlit world I’ve been loving Kyo Maclear, Julie Flett, Oliver Jeffers, and Heather Smith.

I would describe my work as imaginative, a little quirky, a little magical, and full of heart. I’m very passionate about inclusive kidlit. I want every child to be able to find themselves in a story, and that inspires me not only as a creator, but also as a professional who works with young people!

My writing process usually starts very quickly, and then slows as it goes along. The first draft tends to happen in a messy burst, and then the revision process takes me a while and a lot of hemming and hawing – that’s the part of the process I find the most anxiety-inducing. When I feel stuck I like to work on my feet, walking around and sometimes improvising dialogue… Which I’ve come to rely on when writing theatre pieces. I find character work really helpful. I try to work every morning, even if just for half an hour, particularly when it comes to revising. For me inspiration and first drafts are the easy part, and it’s the rest of the process that requires daily discipline.

Harvey and the Extraordinary is a middle grade novel about eleven-year-old Mimi who sees the world in a very special way – as extraordinary, ordinary or extra-ordinary. After Mimi’s father runs off to be a trick high diver in the circus, she comes up with a plan to put on a marvelous mime show in the hopes of proving that she belongs by his side. Despite facing challenges in the form of a grumpy bother, worrying grownups, and an ex-best friend, Mimi and her hamster sidekick pour all of their energy into their one chance at an extraordinary life. Harvey and the Extraordinary is based on my site-specific play of the same title, directed by Neil Silcox. The play was workshopped in 2017, and performed in the 2018 Toronto Fringe Festival (tilt/shift theatre). My Entertainment World gave the show an A+, which was much appreciated as Mimi loves good marks!

I just finished writing a new short story for Bad Hats Theatre (Bad Shorts) called The Great Silence. It was a pleasure to collaborate with such an amazing team, and I’m excited to share that it’ll be released very soon! I’ve also been plugging away on a few new manuscripts as well drafting a new theatre for young audience show!