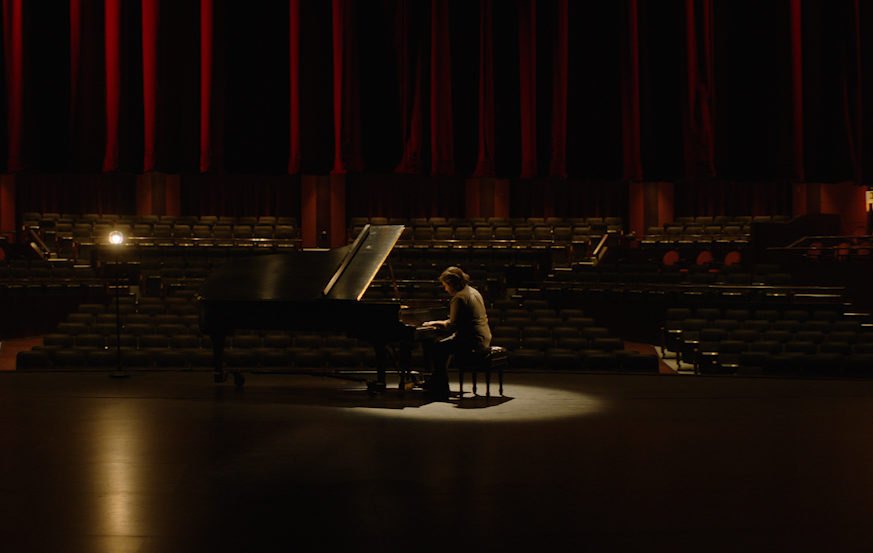 Lessons in Temperament-A Masterful Transformation of Theatrical Space into Cinema

Lessons in Temperament is a film adaptation of Outside the March’s notable solo show of the same name, wherein writer and performer James Smith teaches the audience how to tune a piano while telling stories about his neurodiverse family. If you’ve admired this piece since its site-specific premiere in the 2016 Summerworks Festival, or if you’re only hearing about it for the first time right now, you will, either way, be delighted by its quality of theatrical pleasure. With a fully-realized concept and a tightly-crafted script and performance, this film invents a hybrid between cinema and theatre, a type of ‘theatro-film’ that elevates space into character to support a 90-minute cinematic solo show.

The concept and premise of this adaptation might be the lynchpin to its emotional success as a film. James Smith plays a piano tuner who leads the audience through a tour of his favorite pianos across Toronto. As we visit various theatres, we’re engaged in a piano-tuning lesson which becomes the launching pad from which we take off into stories about James’ family. With this concept, the film achieves the natural site-specific design for the original play, enlivening the spaces and the pianos into the light and sound James needs to dive deeper into his complex and beautiful family stories. As James tells his stories with the space, film and theatre collide in a very organic and unique way, and the theatro-film offers us the magical imaginary world of a play, with the controlled perspective of a film. Without any awkward forcefulness, Lessons in Temperament achieves theatrical transportation through time and space with a cinematic, which is an unusually wonderful immersive gift.

Overall, Lessons in Temperament is a master class in storytelling. The film is written and performed with a contagious love—a muscular dedication to the script’s central metaphor, strengthened with precise, loving intention towards James’ family, the audience, and the topic of mental health.

Live in-person screenings of Lessons in Temperament are happening

November 23rd, 7:30 PM at The Rose Theatre in Brampton

Virtual screenings of Lessons in Temperament are happening