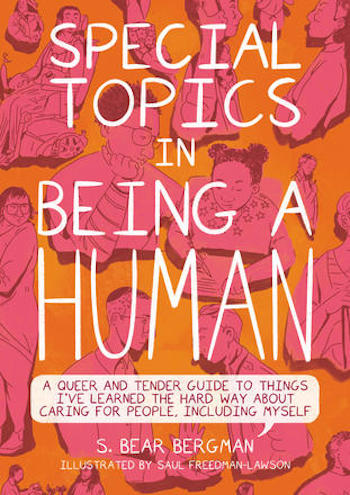 Special Topics in Being a Human: Illustrated Life Advice for Anyone, Regardless of Privilege

The post-modern explosion of self-help books kicked off with the success of How to Make Friends and Influence People in 1936. A steady stream of such books followed, offering practical-but-obvious-when-you-think-about-it advice to a population without internet access, perhaps culminating with the business-oriented The 7 Habits of Highly Effective People. Then came a barrage of feel-good pseudo-science, captained by Deepak Chopra and others attempting to ape his success, offering new-age platitudes and instructions for making vision boards (The Secret, for instance, has sold 30 million copies worldwide). And most recently, from bad to worse: a cadre of middle-aged white men channeling their inner Archie Bunkers to tell millennials that they are not special and that they need to stand up straight – see The Subtle Art of Not Giving a F*ck and 12 Rules for Life for chapters with these specific titles.

If you were to select a self-help book at random from the last fifty years, your odds are pretty good you’d find yourself holding one written by a straight, white man. If not, that book is almost certainly targeting straight, white men – or at the very least, people privileged enough to examine themselves, seek help independently, and then actually have disposable income for buying books and disposable time for reading books. Accordingly, this massive library of advice seems tailored for straight, white men. And no: good life advice for the privileged does not always translate to good life advice for the less-privileged, under-privileged, or totally non-privileged.

Bear Bergman’s new book (available October 12), Special Topics in Being a Human (subtitle: A Queer and Tender Guide to Things I’ve Learned the Hard Way About Caring for People, Including Myself), acknowledges that the last fifty years of self-help advice doesn’t work for many people, specifically those who are non-white, non-straight, non-gender-conforming, non-Christian, or living with disabilities. Bergman is an American trans man of Jewish heritage who has spent twenty-five years writing, performing, and educating about gender and sexuality issues, trans and Jewish experiences, and now (if not also before) simply “being human” experiences. He might be best known for his advice column “Asking Bear,” which offers more-or-less general advice but tends to favor letters focusing on minority or LGBT2Q+ communities. Bergman found that while the letters ran a full gamut of problems and experiences, the core of his advice was often repeated. And hence, Special Topics in Being a Human was born – seventeen chapters with actionable advice to be applied liberally throughout your daily life. If Bergman’s fans all read this book, one might expect “Asking Bear” to receive far fewer letters.

As for the advice, at first glance, some of the chapters may seem hackneyed or overly sentimental. Consider the chapter entitled, “How To Be Yourself.” How often has this question been trotted out by those new-age advice-givers, often in the abstract, assuring you that everyone will love you for who you are? This may be true for the ubiquitous straight, white man, but the question becomes far more complicated for, say, a closeted gay teenager living in a fundamentalist Christian household in Tennessee. Appropriately, Bergman’s answer here is not nearly so straight-forward or rose-colored. If you are a person of color or visibly non-conforming, being yourself is decidedly bad advice in many situations (and see the film Sorry to Bother You for a satirical and relevant look at code-switching). On the other end of the spectrum, a straight white man might (we hope) jump to the chapter about learning others’ pronouns, while Bergman’s fans in the LGBT2Q+ community could easily skim on by. As always, each reader will bring their personal experiences to the book and find value in different places.

Despite the content of the previous several paragraphs, rest assured that Bergman’s book is aptly named and contains advice for being a human. The vast majority of this advice is universally relevant: how to make big decisions, how to break bad news to others, how to take criticism, or how to have an argument without it devolving into a bitter fight. It is difficult to imagine anyone, no matter how privileged or under-privileged, who won’t have to do one of these undesirable things – or could stand to do them a little better. Finally: no matter how you initially perceive one of Bergman’s topics, read on. His take on any subject is likely to be surprising and informative.

Special Topics falls somewhere between an “advice novella” and a graphic novel (although the more accurate genre would be “graphic non-fiction”). The book is expertly illustrated by Saul Freedman-Lawson, and their talent is evident on every page. Freedman-Lawson, with a background in making art about queerness, transness, and Judaism, is a perfect collaborator for Bergman. Special Topics is Freedman-Lawson’s first full-length book and they have clearly honed a personal, unique style, hanging somewhere between Daniel Clowes’ Ghost World and Alison Bechdel’s Dykes to Watch Out For. Freedman-Lawson populates the pages of Special Topics with quirky and diverse characters – Black, white, non-conforming, young, middle-aged, able-bodied and not – which serve as a constant visual reminder that yes, this advice is for you too. These illustrations are essential to the book’s tone, its message, and its appeal. Freedman-Lawson is as much an author on Special Topics as is Bergman.

Both Bergman and Freedman-Lawson are well-equipped to offer advice from a place of non-privilege, but Bergman in particular demonstrates a unique understanding of the social dynamics between men and women. Having transitioned later in adulthood, Bergman has lived a life being outwardly perceived as both male and female, experiencing the advantages and disadvantages of each. With that perspective in mind, Bergman offers advice for men that is not at all intuitive, like, “Don’t yell out the car window, ever.” He relates a story about how he once saw a woman on a bike accidentally dragging her jacket through the street, but by the time he had lowered his window to warn her, she had sped away in fright. Bergman suddenly finds himself being outwardly perceived as that often-intimidating white man. He points out that, on average, men rarely say appropriate or helpful things from car windows – just the opposite, in fact. Hence the advice: never shout out a car window, and let all future jackets-dragging-from-bikes be damned.

S. Bear Bergman is at his best when illustrating advice with personal stories and examples, but the entertaining and helpful anecdotes feel too few and far between. When these relatable anchor points are missing, the advice veers into the vague or abstract; it becomes difficult to imagine how we might apply this advice without Bergman to demonstrate for us. Special Topics also falls into the same pitfalls that have plagued all advice and self-help books since the beginning of time: that is, offering good, actionable advice that most people will ignore because it’s just too hard. Bergman outlines a 5-step system for issuing a proper apology, which is likely too much to remember in a single moment, exactly when apologies are needed most. (Excusing yourself to consult a book about how to apologize will certainly seem disingenuous.) Similarly, taking a week or two to “make a map of you” to help discover yourself may be excellent advice, but most readers will sidestep this type of homework without a therapist there to hold their hand. Still, just because some advice is hard to implement doesn’t mean it’s impossible, or that it’s bad advice; but the audience for that advice shrinks to only those with the will power or urgency to put in the work.

S. Bear Bergman and Saul Freedman-Lawson have put together a book that fills an ever-widening niche: realistic life advice for those who are not necessarily white, straight, cis-gendered, and/or able-bodied. Special Topics in Being a Human is a piece of graphic non-fiction dispensing tender abstractions about the human experience and practical advice for tackling some of life’s biggest questions. The book tackles heavy issues yet somehow remains eminently readable, thanks in large part to Freedman-Lawson’s illustrations. Indeed, Freedman-Lawson’s art is half the soul of this book; the same content delivered without the illustrations would only be half as effective. But don’t be mistaken, the book really is for everyone – or at least anyone who needs to maintain a relationship, make a hard decision, or keep going when the going gets tough. If you’re a person in the process of being a human, regardless of your privilege or identity, consider Special Topics in Being a Human a worthwhile investment in yourself.