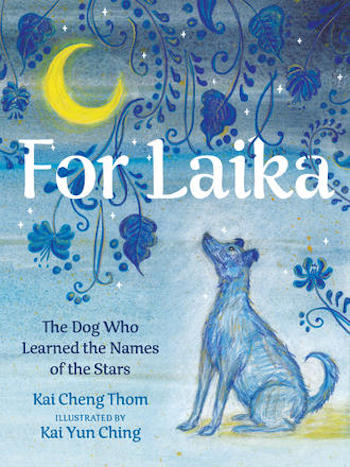 For Laika: Lessons in Bravery for Young Readers

Nothing about raising young children is simple or straightforward, especially those small things that should be. School lunches must be void of any and all nuts, screen time must be limited (forty-three-point-five minutes per day, according to recent studies), and junior hockey practice starts alternately at 6:00 AM and 10:00 PM, twice a week. And now, choosing the correct bedtime story has become another twenty-first century parenting conundrum. Parents are scouting for a true coming-of-age tale featuring an Indigenous child who learns about the importance of STEM subjects while riding a colorful unicorn to their first day of kindergarten with the wise ghosts of Susan B. Anthony and Harriet Tubman. Is that so much to ask? All they want is an educational/culturally-sensitive/racially-diverse story with strong role models and talking animals who tell knock-knock jokes.

For Laika (available November 9) makes a valiant attempt at addressing some of these bedtime story concerns. This picture book introduces young readers to the real story of Laika, the first animal ever launched into space. Kai Cheng Thom weaves a heartfelt and imaginative tale around the skeleton of this bit of history: the eponymous Laika travels with her pack of canine friends and longs to meet her parents, whom she believes have become stars in the night sky. And so, Laika embarks on a journey into space, filled with new friends and demanding her utmost bravery. The book is illustrated by Kai Yun Ching, with full-color pages mixing warm reds and relaxing blues – ideal for calm reading before bedtime.

Be warned, however, that For Laika remains true to life. The Soviet space program was very eager to get Laika into space but less concerned about bringing her home alive. The story does highlight a few caring and ultimately remorseful humans, including Vladimir Yazdovsky (one of Laika’s primary keepers), who waves a teary good-bye to Sputnik 2 as it carries Laika into orbit. While the book remains age-appropriate at all times, observant children will likely realize that Laika never explicitly comes home from her journey. Keep this in mind if your young ones are particularly sensitive.

The theme of the story, naturally, is bravery – and taking pride in that bravery. Laika endures her pre-launch training and ultimately the terrifying flight into space itself. “I will be brave” becomes Laika’s mantra, and that bravery is rewarded when she reaches the stars. Many children’s books approach the topic of bravery from some forced situation – being brave in the dark, in a doctor’s office, or in school. Children are forced by adults into situations where they must be brave, and these common childhood fears spawn numerous books about dentists’ offices and the first day of kindergarten. For Laika takes a different approach: being brave voluntarily might actually get you something you want. That’s an unusual message that deserves some reflection from younger readers.

For Laika tells the true story about the first animal ever to travel into space, reimagined with self-aware dogs with grand ambitions. Thom and Ching deliver an educational and heartfelt tale, possibly at the expense of its lasting appeal (what some would call “re-readability”). While this picture book might not make it into your weekly rotation of bedtime stories (typically reserved for lighter fare), elementary school teachers should take note: For Laika would be well-placed in any grade-school classroom and will kick-start thoughtful discussions about space, the meaning of bravery, and how humans should best care for their animal friends.