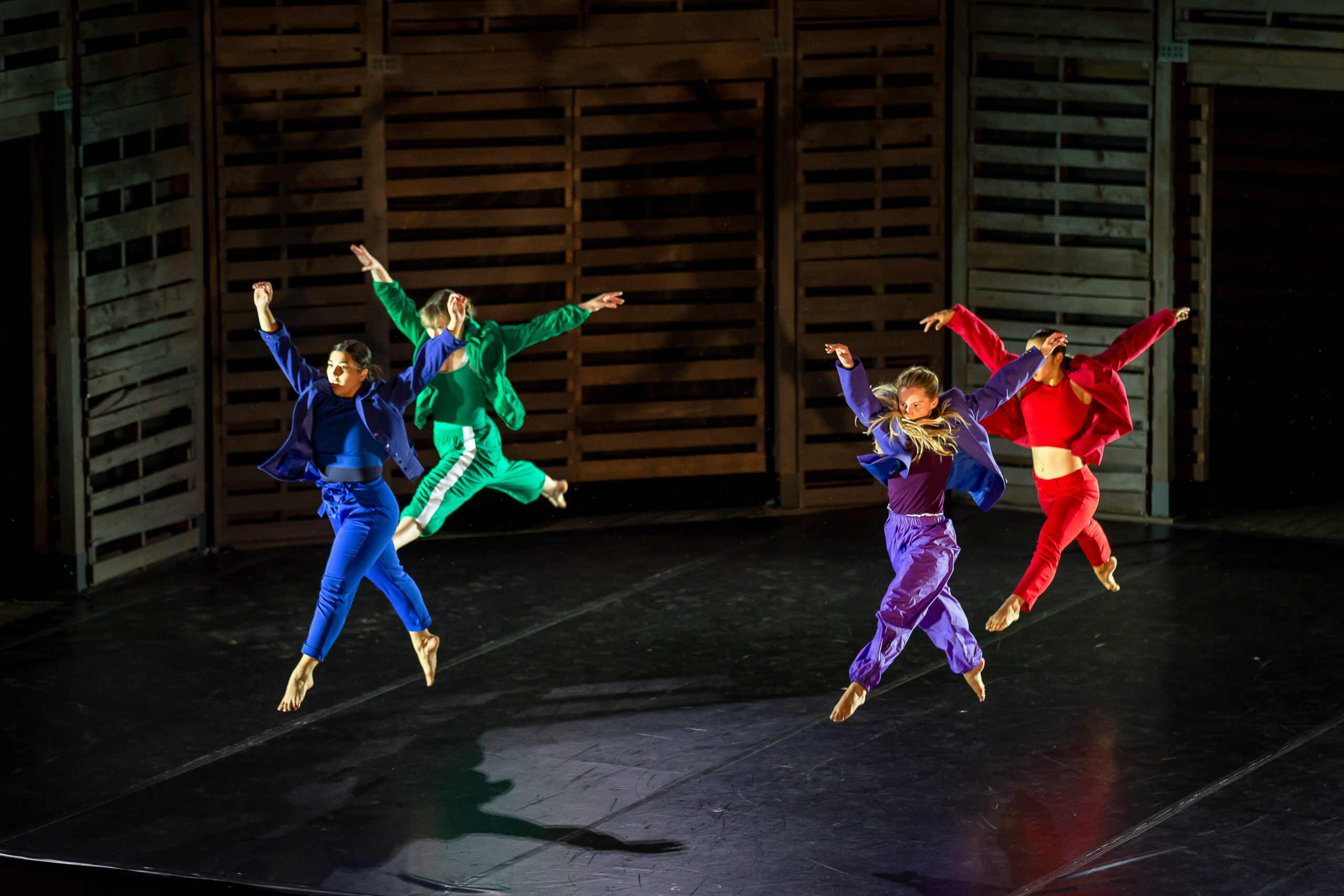 I don’t think it can be overstated what a pleasure it is to return as an audience member to a live dance performance or how magical it is to attend a well curated program presented in the High Park Amphitheatre. Making my way to the venue on a Thursday evening to meet up with a fellow dance-loving friend is a balm for the soul that not even a sky full of dark rain-laden clouds could dampen.

The dance: made in canada/fait au canada (d:mic/fac) festival began 20 years ago as a biennial repertory festival that has stayed true to its vision of making arts accessible to the public while presenting works with unique artistic vision by a cross-section of Canadian choreographers from all cultural backgrounds.

Due to the COVID-19 pandemic the 2021 Edition of the festival—inTO focus—has been produced in partnership with Canadian Stage under the banner of Dream Again in High Park presenting works by Toronto-based contemporary dance artists on the High Park Amphitheatre stage. The opening evening of September 23rd felt a bit touch and go, audience members filed into the venue a bit later than expected and we were warned that although the decision had been made to go ahead with the program the impending weather could end the evening early, the stage was still being dried from an earlier spat of rain as we took our seats.

Soon the sun went down and the stage lights came on, we were welcomed by affable and passionate co-directors Yvonne Ng and Jeff Morris who introduced the program for the evening, highlighting the work of the festival’s Dance Stewards and providing a touching personal anecdote on the inclusion of the programs final work, a solo choreographed by the beloved late Patricia Beatty.

The festival Dance Stewards are a group of eight emerging artists that are provided with mentorship, workshops and networking opportunities by dance: made in canada / fait au canada who also this year created and performed a commissioned work at the start of the program.

This engaging piece saw the creators nodding to childhood school yard games and laughing with one another on stage. They also got a reluctant audience out of their seats for a round of Simon Says emphasising the overall theme of the work that relied on the performers offering simple challenges and responding to each other as the piece progressed. The Dance Stewards playfully broke the ice between audience and stage and helped warm up the crowd on a damp chilly evening.

by Blue Ceiling Dance, choreography and performance by Lucy Rupert

Standing on Fishes is a deeply personal work by dancer creator Lucy Rupert. Created to honour her mother as a celebration of Rupert being the age her mother was when she died, the ethos of the work teeters with the tension of simultaneously looking to both the past and the future, while giving a distinct movement vocabulary to the uncertainties of the constantly mutable circumstances in between. Rupert takes inspiration from a line in a poem by Rilke that highlights the awkward discomfort of finding footing during unprecedented experiences, while, in her words, “playing a game for which the rules are tirelessly rewritten by the heart”. The work has an element of youthfulness that strongly spoke to me. Rupert employs quirky movement patterns that take her across the stage on a distinctive path, as if predetermined by a childlike version of herself who spent much time in a deeply imaginative world looking for a distant destination or treasure that remains elusive. The work ends on a contemplative note as Rupert mimes looking through a telescope, a call back to an earlier moment, an action that is equal parts nostalgic and seeking.

This colourful piece feels like a nostalgic ode to mid 90’s era radio, almost like a lighthearted Pump up the Volume but with the protagonists wearing jewel toned zoot-suit inspired costumes, trapped inside a stereo as a dispassionate entity spins the station dial. The title, however, suggests a much more contemporary theme. The work intends to comment on the evolution of ai technologies questioning what it means to be human through the eyes of technology. This well balanced piece gives a solo to each of the four dancers, each with a different feel and energy. What I interpreted as four different radio stations each with a unique emotive quality are described as four elements of personality functions: thinking, feeling, intuition and sensation. While my own interpretation was technologically decades away from the source material that inspired the work, the evergreen utilization of music and movement to evoke the deeper questions of our humanity remains a universal and lasting source of inspiration.

The Lua Shayenne Dance Company creates contemporary dance and live music performances rooted in the aesthetics and values of West African Dance. Waves/Vagues is described as a work of dance, song, music and words that addresses power structures and takes an honest look at the arduous road to justice and unity. Accompanied on stage by live guitar and percussion, dancer Renee Smith moves to center stage and evokes a silent scream in slow motion. Smith performs familiar West African dance movements with such embodied emotion that her actions transform a movement vocabulary into a full bodied discourse. Smith’s performance is fully committed, creating clear pathways through her body with each breath and action, each movement rooted and connected to the ones before and after with fluid clarity. For example a swing of her arms is initiated in the knees and rebounded through the spine while the arm swing itself is not the conclusion but in conversation with the next moment. The communication between dancer and musicians, as well as between Smith and Lua Shayenne, who performs as vocalist, evokes deep connections of mentorship and support, most hopeful on the ending note as Shayenne implores Smith to follow her, to walk in her path, as she beckons her off of the stage.

This piece was cut short after a burst of rain rendered the stage too slick to continue dancing on barefoot. The program was paused to assess the viability of continuing with the evening, but ultimately it was decided the stage was too wet for the final two performances to safely go on.

While I was unable to experience the entirety of the work, the connection between creator performers Hart and Schleese at the beginning of the piece was tangible. Their duet performed in such tight unity and the communication between them so seamless that when the weather brought the performance to an abrupt end, the synchronicity of their exit from the stage was startling.

Choreography by the late Patricia Beatty

Sadly this work was not able to be staged on opening night due to inclement weather.

The live program of Dance made in/fait au Canada (d:mic/fac) 2021 edition was presented at the High Park Amphitheatre, Toronto, September 23-25th. The Festival also included an extensive multi-day dance-on-film program, The ‘D’ Word Podcast, a silent auction, and the beautifully presented Wish I Was There interactive art project that invited festival patrons to send postcards to each other across the country, cutting through the isolation that has been the result of the COVID-19 pandemic. Select postcards were enlarged and hung on display near the amphitheatre providing a sweetly contemplative final note on the way out of the venue.