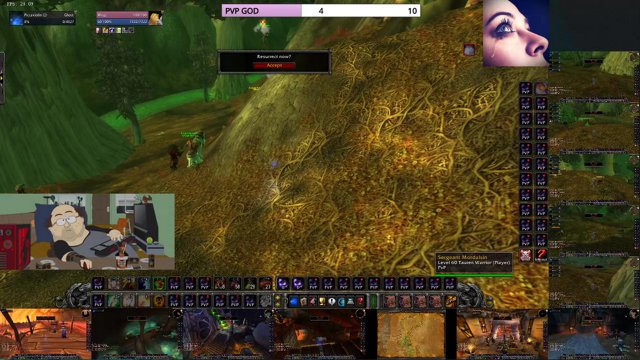 World of Warcraft Banned Griefer While Live on Twitch

Streamers getting banned in video games has become something that sparks a lot of controversy across the esports and the gaming community. Sometimes the streaming platform would issue a ban to someone without even telling them the problem, and other times the game itself may step in to kick the cheaters out who ruin it for everybody.

There are cases where people who have not deserved it have been banned without any explanation, and other times, those who deserve to be banned roam the virtual worlds free. World of Warcraft streamer TinyViolin69 was banned recently, and this has brought viewers together in a very different way than expected.

Rather than the community coming together to defend the streamer, the community is thrilled and celebrates the ban of this notorious player.

Why Did The Ban Occur?

TinyViolin69 has been known as someone who constantly grieves people in World of Warcraft classic for those who are unaware. Griefing does not come under the category of cheating because it’s just someone making the game very difficult to play for other players. However, it does come under the category of someone who deserves to be punched in the face.

The constant griefing could have been the reason for the ban, but TinyViolin69 was also running 16 different accounts simultaneously, all of which were heavily paid for and boosted. Blizzard banned all 16 accounts and freed World of Warcraft from the grief that was TinyViolin69.

Tinyviolin69, Living Up To The Name

World buff sites play a very important role in PVP for World of Warcraft players. Those who manage to acquire these buffs after heavy grinds get an edge over other players, so they must try and acquire them.

For some dark pleasure that he derived from these acts, TinyViolin69 spent a lot of his time at World Buff sites to dispel the buffs off players immediately after they acquired them. This unwarranted behavior didn’t only enrage the community, but Blizzard itself took notice and took action to dispel TinyViolin69 once and for all.

A discussion on r/livestreamfails and the general opinion of the WoW community is that he deserves this. This sort of gameplay adds nothing to the experience, and streaming it for everyone to see just proves that the man had no regrets. Blizzard has not disclosed how long the ban will last, and it may end up being permanent.

For World of Warcraft players, buying items is sometimes a lot more time-saving than the grind. For the time-savvy generation, ELDORADO.GG is the place to buy WoW Shadowlands gold at some of the best prices. Eldorado.gg is a trusted site that deals in multiple game currencies, items, accounts and even helps boost accounts for players. Head on over and start the journey to becoming one of the greats.