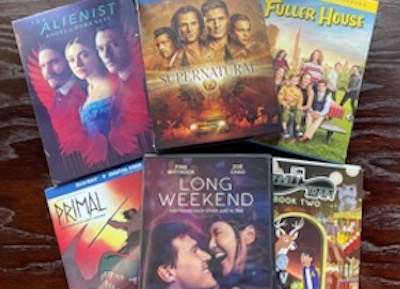 Welcome back to our on DVD series featuring new releases from Warner Brothers & Sony Home Entertainment (review copies have been provided, all opinions are our own).

In the latter category there are three options that run the gamut of genre options. Supernatural is a defining title of horror/fantasy television and I’d call its fifteenth & final season a must-have but you really ought to spend the money for the complete series if you’re serious about your collection (hardcore fans have OPINIONS about that finale). That said, when I say “spend the money”, it’s $370 so it’s a lot of money. Like, a lot of money. It’s definitely worthy, but maybe consider your priorities first. On the other end of the spectrum from the WB/CW long-running populist classic is TNT’s niche psychological thriller The Alienist which is releasing its second season (subtitled “Angel of Darkness”). The Alienist is really solid and features a fantastic cast (Daniel Bruhl! Luke Evans!) but it’s so hard to break through the noise with such a crowded landscape that it sort of just lands in the middle in the pantheon of recent series. It’s worth checking out though if you have the time (the DVD is $25). Finally you’ve got Long Weekend, Sony’s latest rom-com release that is (spoiler alert) a sneaky genre piece (it’s worth knowing something’s coming so you don’t write off Zoë Chao’s manic pixie energy immediately). The great (why isn’t he more famous?!) Finn Wittrock is charm city and shares some really memorable scenes with a crazily stacked supporting cast (Wendi McLendon-Covey, Damon Wayans Jr, Casey Wilson, and Jim Rash are all here and all perfect) but Chao never feels settled or true enough to sell the silly turns of this lightweight romp that thinks its deep. You should skip this one… I’d totally watch a whole movie about McLendon-Covey’s put-upon building manager though.

Over in the world of kids/young adults, there are two top-tier releases from Cartoon Network/Adult Swim: Infinity Train (“Book Two”, aka the second season) and Genndy Tartakovsky’s Primal (the first season), respectively. Priced at $30, the buzzy and beautiful Primal is a good investment for anyone really interested in the art of animation because it’s bound to be a classic known for its stunning visuals. Infinity Train is a lot simpler but similarly touches on some really complex emotional ideas set against ambitious mythology. Priced at less than $20CAN for 10 episodes plus some great special features, it’s our pick for best bet of this batch (in our dream online casino). The other kids/young adult title coming out this season from WB is Fuller House‘s fifth & final season (the complete series also arrives soon). I grew up on the original Full House but Fuller House was never a hit for me despite its nostalgic pull so I can’t recommend this $30 set. If you’re a completionist, maybe get the complete series for the collection, but I don’t see the point in just owning Fuller House‘s mediocre final season (complete with a brutal series finale full of “Michelle and Aunt Becky totally would have come to this family wedding if they could have!” awkwardness).

Two more releases worth mentioning came across our desk recently with review copies provided by Warner Brothers. The Cinderella Story franchise’s sixth instalment: Starstruck is a musical Hollywood Western romp with Hallmark-y feels and a Twelfth Night-y twist. At $25, it’s a high price tag for some silly fun but it’s some really lovely silly fun if you’ve got the money to throw around.

The other major WB release on our radar this month is the final season of Showtime’s Shameless which is somehow also $25 and you absolutely should buy it. Shameless is one of our all-time favourite series and, while season eleven was far from our favourite outing for the long-running series, all seasons of this show were worth watching and $25 is a steal for a full season of a show of this calibre. Run to pick this one up.

Also of note right now is a Sony release: Here Today, written & directed by Billy Crystal. A sweet, simple story about an ageing comedy writer, this indie features a cast so full of gets and guests you won’t believe it until you think for 2 seconds about who Billy Crystal is. Tiffany Haddish gives one of those zany, physical performances that really aren’t my style but would have been called genius if she was a man in the 80s. But mostly this film rests on how much you like Billy Crystal. Personally, I adore Billy Crystal, so I really liked this rare late-career showcase even if it is a bit trite. It hits dvd on Aug 3, you should check it out.