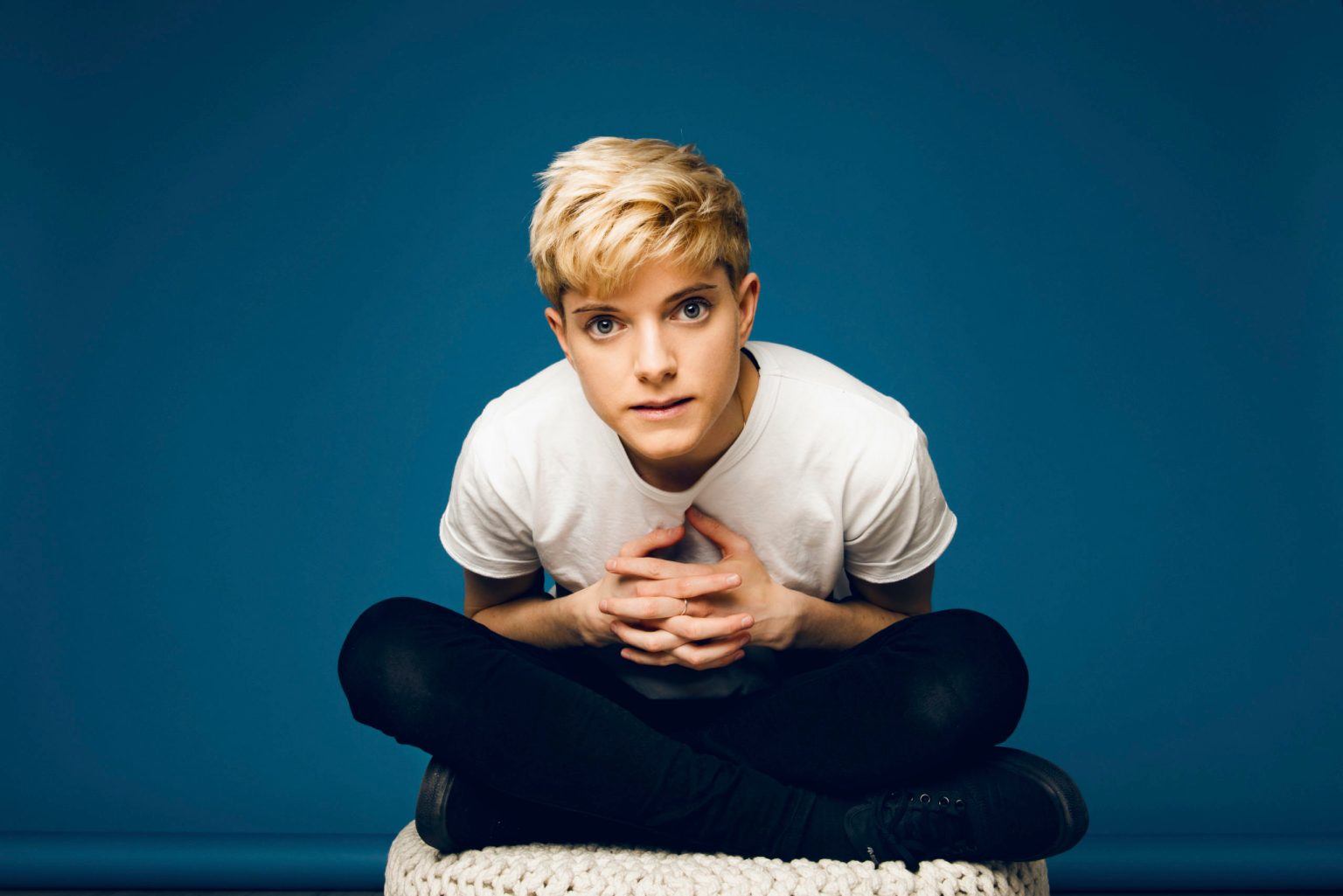 Mae Martin’s autobiographical-adjacent Netflix series Feel Good was one of the great emotional experiences of our 2020 Year of Television. Playing an emotionally truthful/factually ambiguous version of “Mae” navigating love and addiction as a London stand-up, Martin’s easy charm and astounding vulnerability immediately captured our hearts, earning them a nomination for Outstanding Leading Performance in a Comedy in this year’s Critics’ Pick Awards.

Click Here to check out the full 2020 Nominee Interview Series

Do you remember your first formative experience with comedy?
Very vividly. My godmother took me to a stand up club in Toronto when I was 11. I sat in the front row in a waistcoat and bowtie, with very rigid posture, beside myself with excitement. The headliner, freaked out to see a child in the front row, got me up on stage, put me on his lap and said I was his ventriloquist dummy. He thought I was a boy so he got me to say stuff about Pamela Anderson. I absolutely loved it.

Who are some of the artists who’ve always inspired you?
So many. And new people all the time. I was raised on British comedy because my Dad is British so growing up I loved Peter Sellers, Monty Python, and later French and Saunders and Eddie Izzard. I spent my teens worshipping the women of SCTV, SNL, and wanting to be Conan O’Brien. And the Canadian sketch troupe Kids In The Hall was HUGE for me.

What’s something that always makes you laugh?
Characters with zero self awareness who care passionately about something seemingly mundane to the point of their own destruction. Like every character in the movie Waiting For Guffman or any Christopher Guest movie. Catherine O’Hara with tears in her eyes talking about amateur theatre. Heaven.

You started your career in Toronto. What prompted your move to the UK and what are some of the important differences you feel between those two comedy communities?
My partner at the time wanted to do a degree in London so we thought we’d try it out. I had family here, had lived here a little bit as a kid… I ended up falling in love with London so I ended up staying! The main difference in the comedy scenes is scale and infrastructure. Live comedy thrives (or did pre-pandemic) in the UK because it’s supported, and there are many more clubs and therefore more comics making a living than in Toronto. And the scene is so big that there are different pathways you can take and different social circles to dip in and out of, so it feels a bit less claustrophobic. Having said that – when I go back to Toronto I’m always blown away by the stuff people are doing there too. Maybe I’m just obsessed with comedy?

You also spent a few years at Baroness von Sketch Show. What are some of your favourite memories from that experience?
Working and collaborating with friends is always incredible, and Carolyn Taylor has been my idol and one of my best friends for years so it was just amazing and hilarious to be in a writers room with her, and write insane things and see her perform them in ridiculous wigs. The whole cast is so talented and there was a real feeling of excitement that they were doing something different and fresh.

What’s your writing process like when you’re starting a new project?
It really varies depending on the medium! If it’s a stand up hour it starts as improv, then develops a theme, and then I break it down as if I’m writing a University paper and do lots of research. For Feel Good it was sitting in a tiny airless room with my writing partner Joe Hampson for months and months, laughing and arguing.

What can you tell us about the process of getting Feel Good off the ground? It must have felt really vulnerable pitching something so personal, let alone having to take notes on it.
Well, I’d been pitching TV stuff in the U.K. for about a decade to no avail, and then Channel 4 approached me about writing a pilot based on my stand up show Dope, which was very personal and was all about where love and addiction intersect. Joe came on board and we built a world around those themes, and we knew we wanted it to be a love story and got Charlotte Ritchie on board very early too. Making the first series was terrifying because it was all so new to me, but making the second series was terrifying in different ways because it was maybe a deeper dive into my psyche.

How did you approach the balance of fact and fiction when plotting out the show?
My character grapples with all the same issues that I do – addiction, gender stuff, slightly irritating personality – but is less far along in her development as a person I think. The situations and characters themselves were largely fictionalized, but emotionally I’d say it was pretty truthful.

Did you approach the performance by trying to recapture exactly how you were at comparable moments in your own life or did you build key differences into the character version of Mae?
I’m not a brilliant or experienced actor, so my fastest route to real feelings is always going to be emotional recall, but I hope to get better at actual acting.

Lisa Kudrow is also nominated for her work on the show. Tell us about working with her and the rest of the cast and a little bit about the casting process.
We reached out to Lisa with the scripts never dreaming that she would read them let alone fly over to the U.K. She’s such a brilliant actor and such a hero of mine so it really was a dream come true. She’s keenly intelligent and my writing partner Joe and I loved writing for her. Casting George was really crucial because the character has to be someone we root for even when she behaves badly, and we have to really believe in the central couple of Mae and George. Charlotte Ritchie was someone I knew through Joe, who went to Uni with her, and we’d always found each other very funny at parties and I’d admired her work and was keen to work with her. The first time she auditioned we couldn’t stop laughing so she had to audition a second time and we had a glass of wine before so we could be a bit more serious. Working with her so closely over the past few years has been a real privilege, I just think she’s so talented and funny and brave. I feel very lucky.

Your show is very honest about issues of addiction, sexuality, and gender. What have been some of the most memorable responses you’ve heard from viewers who were impacted by the storytelling?
Oh man I’ve had the NICEST responses from people of all ages saying that the show has helped them come to terms with how they feel about their gender or sexuality. I’ve heard from a lot of people who identify with George, who say “I’ve been in a secret relationship for a year because I’m ashamed to introduce my partner to my wider world, and after watching the show I’m going to tell everyone” and that’s incredibly moving to me. I’ve also been touched by people writing to me about their experiences of addiction.

Did you have a favourite moment in season one?
I really had a good time filming with Lisa in the Ghost Train. That was pretty surreal. I also really laughed and ruined a lot of takes while filming the sex scene where George pretends to be Susan Sarandon.

Give us a glimpse into the creation process for the upcoming second season.
I’m really excited for people to see Season 2. The returning cast is incredible, and the new cast blew me away. It’s make or break for Mae and George, who are trying to figure out if they can transform their, let’s face it, relatively toxic relationship, into a healthy long term one. They both go through a lot of personal growth. I don’t want to give many spoilers away, but I hope and think that we’ve elevated the show to deeper depths and higher heights. We’ll see. Everyone might hate it, you never know.

What are you doing now/ what’s your next project?
I’m developing a comedy thriller series with Netflix and have a few other exciting things in the pipe line. I’m also absolutely desperate to get back to live comedy when the pandemic is just a memory. I really miss stand up and will never take it for granted again.

Do you have anything you’d like to add?
Not much except I was thinking about it this morning and I’m pretty sure we are, in fact, living in a simulation.