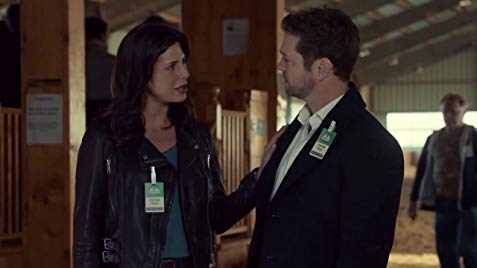 In light of all the mandatory sitting at home by ourselves that’s happening right now, I decided to try something I’ve never done before: I actually watched all those cookie cutter crime shows that TV networks renew for decades on end and grandmas watch during daytime reruns for some reason. I often say I “watch everything on network TV except the acronym shows” well NOT TODAY! I tried my hand at one episode each of every procedural my dvr could find. Below is my official report.

The episode I watched of the hyper-Canadian PI dramedy Private Eyes was from season one. They’re three seasons deep now, making this particular adventure in classic odd couple tropes a few years out of date but is that still any excuse for the lead character having to have explained to him that “the 6ix” is slang for Toronto? There’s something deeply uncool about Private Eyes with its goofy theme song, tired formula (a civilian teams up with an investigator! He’s loosey goosey but she’s all about them rules!), and its dopey Canadiana (I really appreciate how unabashedly anchored in Toronto the show is but a retired hockey player, really?) But, at least when it comes to ageing golden boy Matt Shade (Jason Priestley, of course), part of the fun is that he’s so completely not cool but thinks he is. If anyone watches this show on the regular, could you let me know if his way-too-hot PI partner ever develops a personality?

This show is very far from good but I like that it exists if only to boost the truly weak Canadian TV market. I’m all for a balance of solid, unambitious procedurals to hold down the commercial fort so that more imaginative fare is a risk producers are more comfortable taking, but we’ve done this better before (RIP, Remedy). But there is one great thrill of Toronto-produced TV that the Americans can never match and that’s the bittersweet fun of catching a glimpse of someone you know from the stage, picking up a TV pay check that will fund their theatre work for a stretch. I hear Howland’s Ruth Goodwin gets in the Private Eyes action down the road, what fun.

But for now, I’m not having much fun with this show. They were hired to find a missing rapper. Stuff happened. Idk, none of it mattered much. Maybe more fun banter would help? Or maybe it would make it a whole lot worse. Hard to say. Bring on more supporting characters at least!