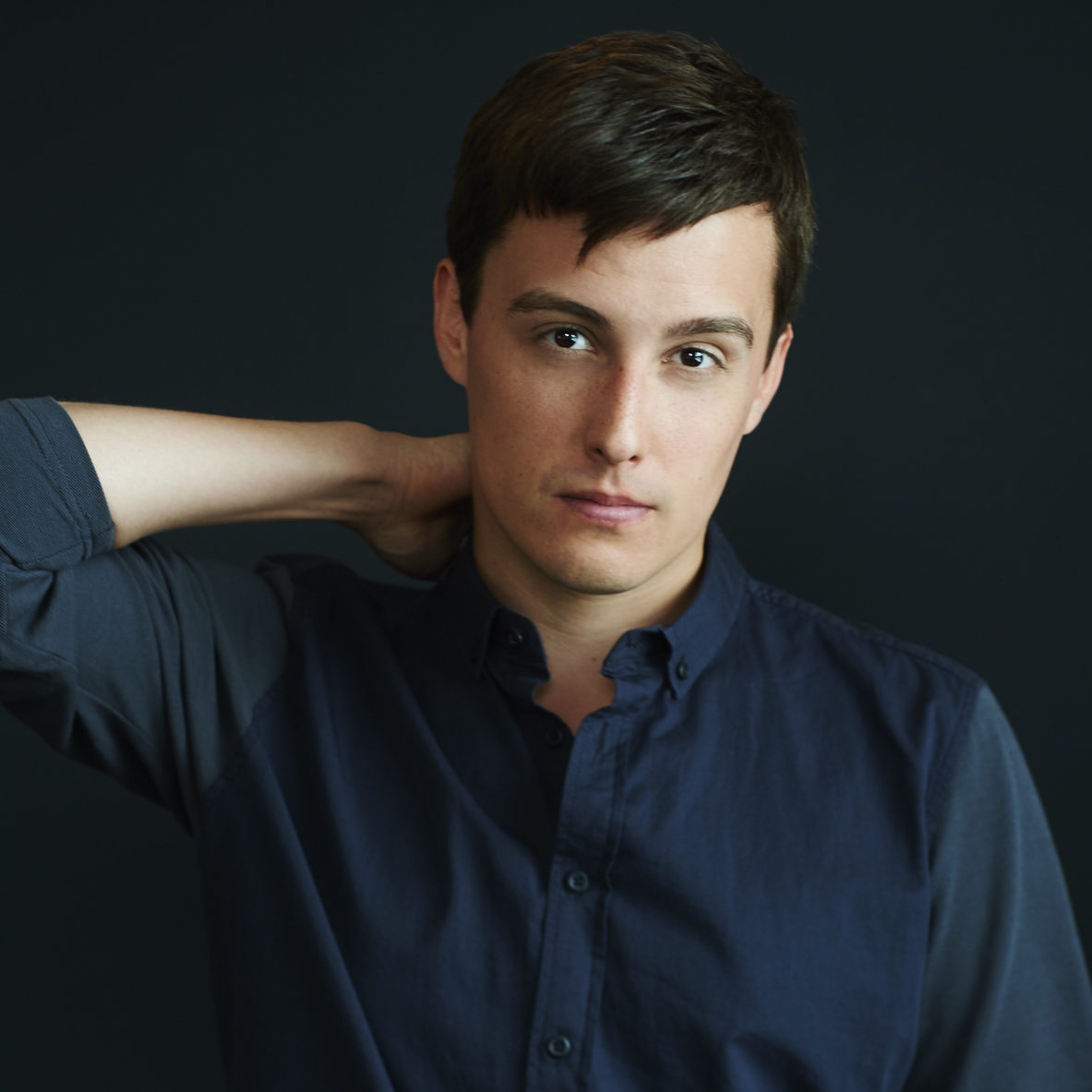 Robert Markus singing ‘Waving Through a Window’ was on my Best of the Decade list of outstanding moments in Toronto theatre. His performance as Evan Hansen was not only vocally masterful but nuanced and thoughtful as well. He’s nominated for Outstanding Performance in a Musical for the second year in a row because he’s great in everything, even one of the hardest roles in the contemporary musical theatre canon.

Can you remember your first experience with theatre?
My dad used to take me to community theatre when I was a small child. They were adaptations of faerie tales for children. I remember being entranced by the performances. I remember specifically asking my dad if we could stick around after the show to get the performer’s autographs. My parents might even have my signed program of Puss In Boots somewhere in a storage locker.

When did you first start singing?
I used to sing myself to sleep when I was a kid. On the odd occasion, my parents would have their friends over at night for drinks, and from upstairs, they could hear me singing. Mostly likely Whitney Houston or Stevie Wonder. I took singing more seriously when my parents put me in weekly vocal lessons to prepare for auditions for my high school drama program. It sparked my love for musical theatre, and I’ve been a bit of a singing nerd ever since.

What are some of your favourite musicals and why?
Good question! My all-time faves would be West Side Story and Light in the Piazza. Their scores are timeless.

Do you have any dream roles?
When I graduated from theatre school, I had this massive list of roles I wanted to play. I’ve been incredibly fortunate to have played a few of them, but funnily enough, I’ve let most of them go. I would love to play Tony in West Side Story and Fabrizio in The Light in the Piazza. But I fear my time to play those roles have passed. Now for me, the experience of creating and running the show is the thing I dream about. When the perfect combination of actors, crew, director, and designers create a story that they are genuinely passionate about. It’s a pretty rare occurrence, but when everything aligns, that is the dream, regardless of the role.

You were nominated last year for Rocky Horror. What stands out in your memory about that production?
Ugh, so many things. Rocky Horror was absolutely one of those dream experiences. It felt like the right combination of cast, crew, director, and team telling a story at the right time. The memory of the first preview sticks out as one of the strongest. As a cast, we weren’t sure of how the show was going to be received by the Stratford playgoing community. It was a rush, unlike anything I had experienced from a performance before. It was ecstatic, thrilling, and wild. I’ve never felt more like a rock star, and I think the entire team felt the same.

Tell us about the audition process for Dear Evan Hansen.
It was very unconventional. I sent in a self-tape for the show in June 2018 as I was in rehearsals for The Rocky Horror Show and The Music Man at Stratford and couldn’t attend the auditions. I was told: “I wasn’t what they were looking for and that I was too old to play the part” and didn’t get a callback.

In late November, my agent called me and said that the producer had seen my tape personally and asked if I would fly to New York and audition for the entire team. I decided to go for it because I thought it would make a fun story. I flew to NYC on the same day of Rocky Horror closing at Stratford. I had the audition the next day, and the day after that, I was offered the role. It was a bit of an unexpected whirlwind.

What attracted you to the role of Evan?
Honestly? Because I knew it was going to be really freaking hard. I’ve always seen Evan as a bit of a musical theatre Hamlet. It scared me a lot. Parts like this don’t come up very often. I would have been silly to have given up the chance to play such a well written and emotionally challenging role.

For rehearsals, I gave myself the mantra of “process before product”. I tried not to recreate someone else’s performance but rather follow my own impulses and try to discover who my Evan was. Luckily, the team wasn’t interested in me re-creating Ben Platt, or Taylor Trensch. They were interested in finding out what I would bring to the table.

The role requires a ton of vulnerability, is that something that comes naturally to you?
Not necessarily. I think it’s taken me a long time to allow myself to be vulnerable on stage. It took a long time to develop that access for me in rehearsals. Later in the run, it was easier for me to jump into once I strengthened that muscle.

Your career has taken a bit of a Michael J Fox turn into prolonged adolescence. How do you feel about getting roles that send you back to high school?
Woof. Well first, I am super flattered about the Michael J Fox reference. Living in high-school during Hansen was a joy because the material has such emotional intelligence. I’ve had a great time in my prolonged high-school adolescence. However, currently, I’m enjoying playing my actual age on stage.

Let’s talk high notes. The pop-y score is really demanding. Do you have any tricks or habits to keep your voice from wearing out over the course of a long run?
Tricks? Um. Not so many tricks as vocal rest, having a great singing teacher, and having the ability to go to an incredible speech-pathologist. Shout out to Dr. Aaron Lowe, who helped me survive the run and assisted me in dealing with having to cry every day on stage. (It can really screw with your vocal mechanism).

Tell us about working with the director and music director to help shape the role.
I loved my time working with our director, Michael Grief. He was patient with me as I explored who Evan was and how my Evan would be different than the performers who had played the role before me. I don’t think I’ve ever been challenged by a director like that before. He would give me pages of notes after a show and say, “I’m giving you these notes because I know you can do them.” Also, his version of what he wanted to see from my Evan was always evolving. I never felt like I was trying to create this perfect version, but rather one that was still continuing to grow and develop.

Ben Cohn was our NYC musical director. He was so INCREDIBLY patient during the process. When we started, he had not only been the MD for the original production but had taught multiple replacements for the NYC company and the entire Tour cast, as well. He was so insightful and meticulous, not to mention well-spoken. Very big fan of the guy.

What were you hoping audiences would take away from the production?
Hope. Maybe a desire to connect outside of our phones and screens. To know that we are never alone in our moments of hopelessness.

Did you have a favourite moment in the production?
Oh. So many. I always loved the scene before ‘Words Fail’. Claire, Steph and Evan were always so committed and generous. I never wanted to let them down both in character at that moment in the show and as their scene partner. The cast of DEH were really an incredible group of artists to work with.

You also worked on Ross Petty’s 2019 pantomime. Any particularly fun memories from that run?
I really enjoyed the Panto cast. There’s one moment that sticks out in particular. I think we were on our 9th performance of the week (Holiday schedules… super hard). We had just completed the children’s participation segment of the show (three children would come onstage and help us escape from a jail cell). For some reason (probably due to our exhaustion), one person cracked and started to laugh on stage, and the laughter passed on to every single one of us. We managed to get through the scene, and I was able to get myself back on track for my song, but I don’t think I’ve experienced anything like that before. The audience was definitely with us too, which I think only added to the humor of the moment.

What are you working on now/next?
Right now, I am deep in repertory rehearsals for Chicago at the Stratford Festival that will open this May. I’m also in a brand new musical called Here’s What It Takes. Its book is written by Daniel MacIvor with music and lyrics by Steven Page (of Barenaked Ladies fame). Here’s What It Takes premieres at the Festival in June.

Do you have anything you’d like to add?
Thank you so much for the nomination!