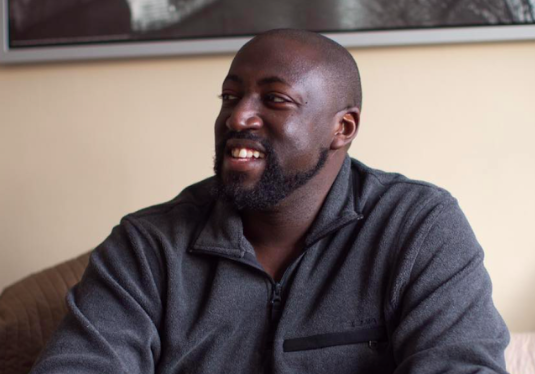 “Kevin Patterson is an active member of the Philadelphia polyamory community. He’s been practicing ethical nonmonogamy since August of 2002 after opening up a relationship that eventually became his marriage. In April of 2015, Kevin was inspired to start Poly Role Models, an interview series for people describing their experiences with polyamory. Poly Role Models is part of a drive and a desire to change the way our lives and communities are viewed. It is currently the most diverse and inclusive platform for polyamory available. To continue the discussion of polyamorous representation, Kevin has extended the blog’s work into nationwide speaking engagements about how race and polyamory intersect. This has led to the writing of the book, Love’s Not Color Blind: Race and Representation in Polyamorous and Other Alternative Communities. Along with co-writer Alana Phelan, Kevin launched a sci-fi novel series, For Hire. The series centers characters of color and as well as other marginalized identities”.

Do you remember the first thing you ever wrote?
I used to draw and write comic books in high school. They were terrible but it was a really valuable experience at the time.

How did you develop your skills?
Doing non-fiction, my work is mostly just me talking about myself. The skill I developed was the ability to turn everything into some pop culture analogy. It’s what I’m best at and I just got better at it the more and more I spoke about my experiences.

Who are some of your biggest literary influences? Do you have a favourite book/author?
My favorite writer growing up was Chris Claremont. His long run on X-Men covered so many topics deemed subversive by the standards of privileged white America. I like leaning into those topics as well but from a different perspective.

How would you describe your work?
My non-fiction work is a truthful, unfiltered look into the lives of real polyamorists. My fiction work is geeky, inclusive nonsense.

What’s your writing process like?
The voice I trust the most is my own spoken word. So, I record myself talking about what I mean to write about. Once I’ve gone at length, I listen to myself and flesh out my ideas in a way that maintains the voice.

Tell us about your most recent work?
My latest work is a queer, polyamorous superhero novel called For Hire: Audition. It’s the second book in the series. It stars a young transgender woman trying to dig herself out of an apathetic and disaffected lifestyle with the help of a washed-up superhero.

What are you working on now/next?
My co-writer and I are currently working on the next three books in the series in various bits and pieces.

The fifth annual Naked Heart LGBTQ Festival of Words will take place in Toronto from November 22, 23 and 24 2019 at Glad Day Bookshop and Buddies in Bad Times.