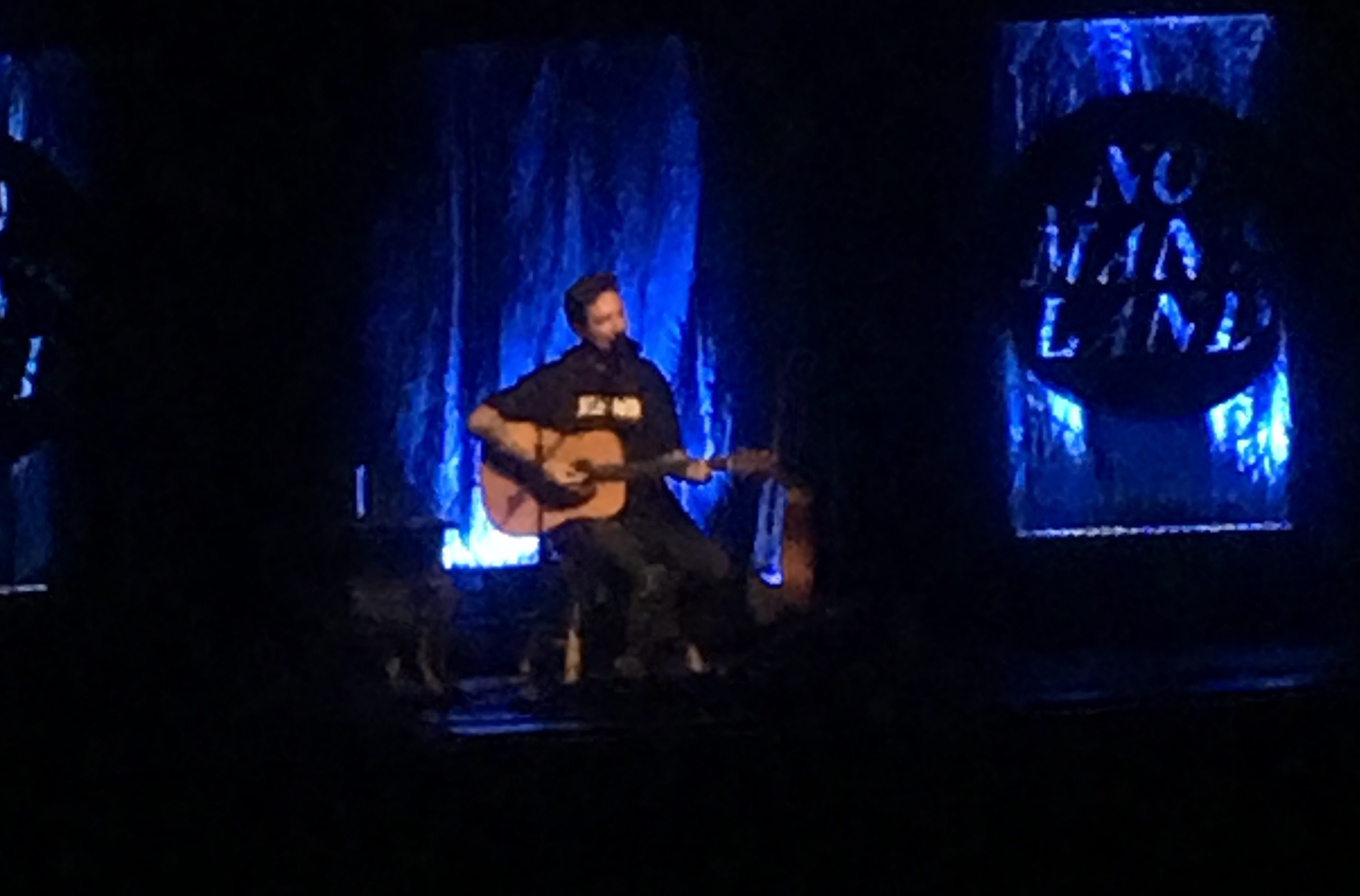 October 10th was the first time Frank Turner has performed in Toronto since I started listening to Frank Turner. I’ve never been to one of the high-energy concerts at the Phoenix or the Danforth Music Hall that explain his being so closely associated with the punk scene for someone who sings songs about his mom. But my understanding is that what we got on the 10th at the Queen Elizabeth Theatre was pretty different from what his live show devotees are used to. The folks I talked to in the photo pool were very concerned about how the second set in particular would go with everyone, including Turner, seated politely like we were there to see Hamlet. Turner himself seemed confident in the decision of the new approach but potentially uneasy about the reaction. He opened with the line “you’re all sitting down, I’m sitting down, it’s going to be fine”.

And it was fine! It was great. But keep in mind that I voluntarily spend most of my time seated politely actually waiting to see Hamlet and consider it a top priority to avoid loud music and boisterous crowds. I know, I’m such a good person to assign to review a punk show. But Frank Turner isn’t really a punk musician, at least not anymore, unless we’re using the cooler Urban Dictionary definition that says “punk is about liking what you like, being yourself, saying what you think and FUCK ALL THE REST”, by which definition I think it’s pretty punk to stare down a cynical world and write a song called “Be More Kind”. Also by this definition, it’s punk to sit down and tell stories to a crowd that wants you to dance and scream.

After the opener (Kayleigh Goldsworthy, a strong-voiced singer of sad country songs and an excellent cover or two), Turner took the stage with two sets- first, just him and his guitar, singing the best of his latest album and telling the stories that accompany those songs. Then he was joined by his band The Sleeping Souls to play the hits, albeit slightly reimagined versions of the hits that were more at home with the seated calm of the show’s overall tone.

A lot has been said about Turner’s new album No Man’s Land, its female-led narratives and lack of female voices, but I’m not too fussed about it. I think it’s really important that our artists be able to tell stories outside of themselves and so few men show any interest at all in the lives of women let alone enough interest to want to write about them. (Literally something I was taught in creative writing class in high school was that, according to sales numbers for children’s fiction, girls will read stories about boys but boys won’t read stories about girls). No Man’s Land comes from a place of earnest history nerdom and a desire to tell interesting stories that haven’t been told a thousand times before. If the good intention somehow isn’t clear to you in listening to the album (or interviews about it), hearing Turner perform the tunes live and enthusiastically tell the stories that inspired the songs should help you wrap your head around it. Turner isn’t a forceful presence, he’s grounded and unassuming, hard on himself (he apologizes ahead of time for performing a song with a scat solo), and decidedly gracious.

The most telling piece in the first set is “Sister Rosetta”, one of the album’s more up-tempo tunes and also one of its most popular judging from the cheers and scattered sing-alongs. In telling the story of the “god mother of rock and roll” whom history has forgotten in favour of the white men who came after her, Turner acknowledges that he himself is someone who obviously lives in the “white boy hype” that stole Sister Rosetta Tharpe’s thunder. But rather than pretend that’s not true and just not bring it up, Turner wrote about Rosetta who, at the time he was writing, wasn’t in the rock and roll hall of fame. He meant for the song to be a call to arms of “Rosetta for the Hall of Fame”; he joked that he would nail his lyrics to the door “like Martin fucking Luther” (told you he was a nerd). Rosetta is in the Hall of Fame now so he changed the lyric to “is in” instead of “for the” but the song still stands as an acknowledgement of whose shoulders he’s standing on. If it’s done with that much respect (and never at the expense of women having the opportunity to tell their own stories), I have a hard time imagining it could ever be a bad thing for men to write about the women they admire.

Turner opened the second set with a rhythmically adventurous take on one of his earliest hits, “The Ballad of Me and My Friends”, a song so popular that the crowd was visibly thrown by their inability to sing along on account of not knowing the new timing. That tension between expectation and slightly reimagined reality permeated the second set as the concert crowd tried to get used to being a theatre crowd (they talked a lot and kept getting up to go to the bar mid-song; no one was quite sure of the rules). For the most part, I appreciated hearing new takes on established material, though my sympathy for the really hardcore Turner fans was stirred when he played what I consider his masterpiece (“I Knew Prufrock Before He Got Famous”) and the coffee house vibe just didn’t quite do it justice.

Some of the changes were for the better- the uncharacteristically assholish lyric ‘just picture her after she’s had kids’ in “Reasons Not to be an Idiot” became ‘…when she’s 76’, which felt like a relief. Though keeping the heart of most things the same really paid off when he’d occasionally hit on one of those songs that visibly really mattered to somebody listening. A woman near me sang along to ‘The Way I Tend to Be’ like it was the last song she might ever get to sing.

That second set was as littered with the personal as the first set had been filled with stories about anyone but him. Matt Nasir bantered from the keyboard about whether or not it was the right choice to end a particular tune so abruptly and the depth of the relationship between frontman and band by live show #2395 was terrifically clear. Onstage behind his guitar with his band at his back, Turner freely talked about life and love and answered a question about life on the road that he had actively dodged when I asked on the phone just before he left for tour. He talked about anxiety and self-improvement and how songs some people called preachy were really him preaching at himself. He recounted fielding angry calls from exes who thought they were the women in “Substitute” and some who felt slighted that they weren’t. He toured us through his relationship with love right up to the moment when he looked at his now-wife and thought ineloquently but somehow perfectly ‘hold on a minute, this is the shit’ and wrote “There She Is” for her as she slept.

As he neared the end, Turner veered away from the hyper-personal and towards the ‘incorrigible optimism’ that guides his general world view. At the end of a concert that had asked his fans to try something they weren’t comfortable with and give him the benefit of a fair amount of doubt, Frank Turner shared his ultimate claim that ‘people are fucking great in general’ and launched into a last run of songs chosen specifically to let the audience sing and dance and, finally, stand. The tune that brought them all bounding to their feet was the bizarre miracle that is “Long Live the Queen”, a brutally evocative song about sickness and mourning that’s somehow also a joyful bop. Though Turner himself never stood, he gave his fans a chance to do as they’ve always done and he ended, of course he did, with “Be More Kind”.