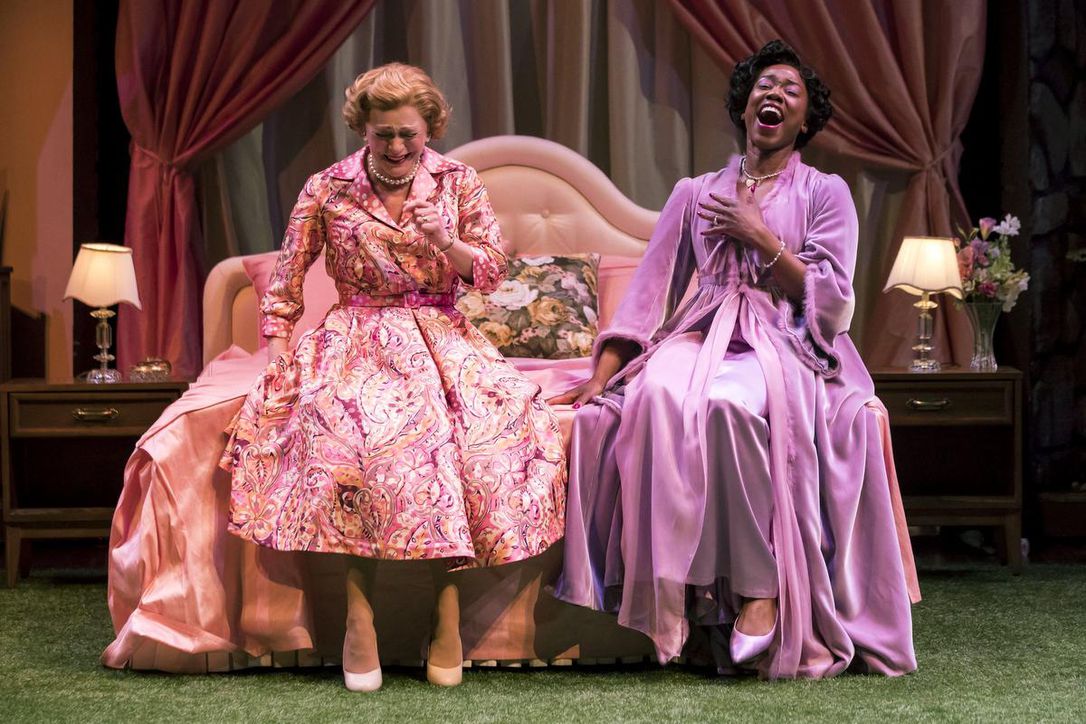 The Merry Wives of Windsor is an obtrusively fat play in many senses. With about 472 disparate characters and plot threads, it’s in desperate need of trimming. It also packs in more fat jokes than a fratty comic on twitter. It’s a gruesome, empty bit of silliness redeemable only by its surprisingly wily female characters who take control for a scene or two in the middle. The whole thing has strong “wrote it in two hours while drunk because your patron asked you to” vibes and should be tossed on the unproduceable heap with Shakespeare’s few other truly bad plays for the crime of resurrecting then ruining Falstaff, if not for its myriad other atrocities against good storytelling.

Alas, The Stratford Festival has dedicated itself to producing (and filming) every play in the canon by 2025 so at some point The Merry Wives of Windsor was going to have to reappear. Luckily, director Antoni Cimolino knew to take a bright, fast-paced, and (somewhat) modern take on the material. Though the sort of close reading and outside-the-box interpretation that can really resurrect bad Shakespeare doesn’t happen, at least the production is high spirited and nice to look at. Thank god for designer Julie Fox.

It’s perhaps too nice to look at, avoiding the muck and mess of its ugly plot with a clean happy ending and literally avoiding the muck and mess of the slapstick scenes with empty water basins and rubber cow pats. The yuckiness of what is essentially a forced marriage plot is sanitized by the broad goofiness of the suitors involved and, though Jamie Mac’s preppy goof of a Slender is good for a laugh, a lack of concrete character choices results in Shruti Kothari’s Anne Page just choosing between three slightly differentiated variations of nerd.

Graham Abbey is the production’s standout player, embracing Mr. Ford’s idiocy and broad comedy without running away from his dark side. At times he seems to be battling the text in an effort to infuse a little humanity into the proceedings, pausing after the words “my heart is ready to crack” just long enough that the audience wonders if maybe his inexcusable actions could be propelled by at least slightly sympathetic hurt rather than simply by petty jealousy. Alas, the script is the script and at some point he has to reveal that his heart just breaks “with impatience”.

Ford’s easy redemption is the play’s most absurd crime in a 2019 context, forgiving and forgetting toxic behaviour so alarming that it’s a helpful memory to carry with you into Othello which is playing in rep with Merry Wives featuring much of the same cast (perhaps the most interesting element of Merry Wives revolves metatheatrically around the realization that the season’s Othello, Michael Blake, is the only man never made a fool of in Merry Wives entirely because his character Mr. Page absolutely refuses to be moved by jealousy). Alas, Falstaff is our central villain-ish fool here (a Falstaff who bears so little resemblance to his stirring Henry IV self that it’s best to separate them in your mind) and there can only be one fool, apparently. Geraint Wyn Davies reprises the role AGAIN (what is this, three times now? Let’s move on, shall we?) and, though his willingness to go full gross with the part is, I suppose, admirable, there is absolutely nothing new of note in his performance.

The only real charm of the production not provided by Fox’s lovely set and costumes comes from Brigit Wilson’s Mrs. Page who is a funnily modern creature full of piss and vinegar and covered in pink satin. She feels imported from a better play and the few scenes when she’s fully got the reigns are when the production bops along at its best pace (the other women get in the action a little too but they have so little to do that it just makes me sad to mention them). There’s a little good writing in there as Mrs. Page plots her revenge on Falstaff’s lame fuckboy antics. It’s a shame there’s so much fat around that kernel of interest to really weigh the play down.