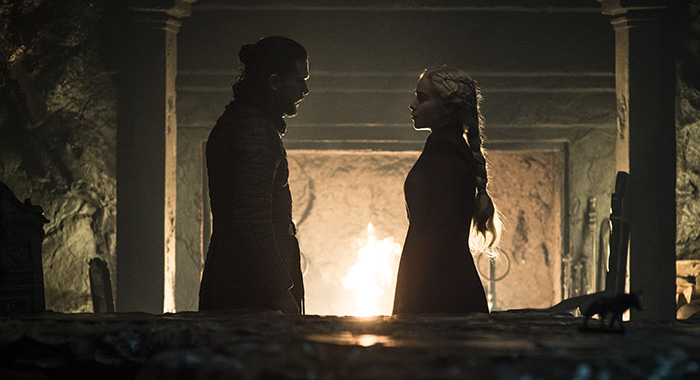 Game of Thrones: “The Bells”

Honestly, I don’t know what I’m supposed to tell you about this week’s episode. I had to watch it again immediately after it was over. There’s so much to process, so much to go over, and I only get one article to do it in. It feels patently unfair, but God still hasn’t read any of the letters I’ve written to his ‘complaints’ box so I’m just going to have to give it my best go.

Yes, people all over-hated this episode. The fundamental criticism that D&D (David and D.B, the producers) are ruining the show with season 8, just driving it into the ground as they laugh over all the money they’ve made, has some merit to it. The fine line between writing a good conclusion with satisfying endings for all parties involved and just rushing to wrap everything up has become less distinct. The reality of the show, as one of my friends put it, is similar to what Battlestar Galactica fans used to say: “everything you want in the worst possible way.”

I say similar, because it’s not a perfect analogy. Cleganebowl was true fanservice, predestined from earlier seasons but in full fruit in this episode. Whether or not everyone was ready for The Hound to die, you have to admit, it was a heck of a stage for a fight – collapsing towers, a stairway to nowhere, fire and death all around. It was pretty much perfect, the little sequence it occupied. Euron’s death was also pretty finely done. Even if Daenerys didn’t get to burn him alive, with his fleet gone and no more ballistas to fire, his character arc got wrapped up nice and bloody by Jamie. Their arcs also intersect in an interesting way – one of the most recent arrivals to the show (and one of the most hated characters) is killed by a ‘hateful’ character from the very beginning, on the road to completing his redemptive arc.

Of course, what follows is not even close to remarkable. Jamie and Cersei being buried alive, while dramatic, is not exactly what people were expecting. Arya’s decision to leave without killing her sparked some hate, but the bigger issue is that Cersei dies without saving her child, that she dies on someone else’s terms. D&D made the decision to validate Jamie’s death wish, to die in the arms of the woman he loved. Bronn’s question from season five, asking if that’s what she wants, too, isn’t even taken into account. So Cersei dies to make Jamie’s arc complete, without any regard for her character arc. That she was going to die is and has been certain. That she should die on someone else’s terms is unwarranted and out of character.

And, if we’re talking about female characters being put through the worst ringer imaginable, we can’t leave the Mother of Dragons off the table. We all wanted to see Drogon flying over Kings’ Landing, to fulfill the promise of the vision Dany had in the House of the Undying. Maybe tearing down the Red Keep would have been cool, too, if it hadn’t been preceded by the complete and utter ransack of the city. Whether the choice was made to paint Dany like the Mad King, or the SFX department had some extra time on their hands and played ‘what if?’ scenarios with a dragon, wildfire caches and the city, Dany’s decision to burn it all down sparked more controversy than nearly anything else Game of Thrones has thrown our way.

Whether or not she wanted to be queen of the ashes, whether or not her mercy was exhausted by the consistent and continual loss of friends and dragons, whether or not she made the choice for fear over love, whether it’s her seeing the castle her family built and the rats that have taken it over, Dany snapped. I don’t have any answers or explanations, save that D&D wanted to create parallels, which they love, and controversy, which everyone loves. Parallels, as the wildfire detonated in the secret tunnels, echoing back to the Mad King’s promise to destroy everyone and everything. Controversy, as Dany’s character is sacrificed so Jon can be forced into kingship. It’s poor timing, yes, with what’s happening in the political landscape regarding the lineup of female and male presidential candidates. I have to remind myself that they started filming this final season in 2017, that no one then knew we’d have the gender politics landscape we do now. And yet, regardless of the current climate, the larger part of me believes they should have known. Trading a female ruler for a male one is contentious at best, and in a fantasy series so obsessed over by fans, truly precarious. To say that it’s all part of a larger picture, that everything’s falling apart in the show and in the real world, is to make a cheap attempt at art imitating life or vice versa.

The truth is, if you think this show’s going to have a happy ending, you haven’t been paying attention. What it will have, all we have been promised, is an ending. Frothy as our collective rage is, it’s all we have, all we can do, to hold on, dig in, wait, and watch.