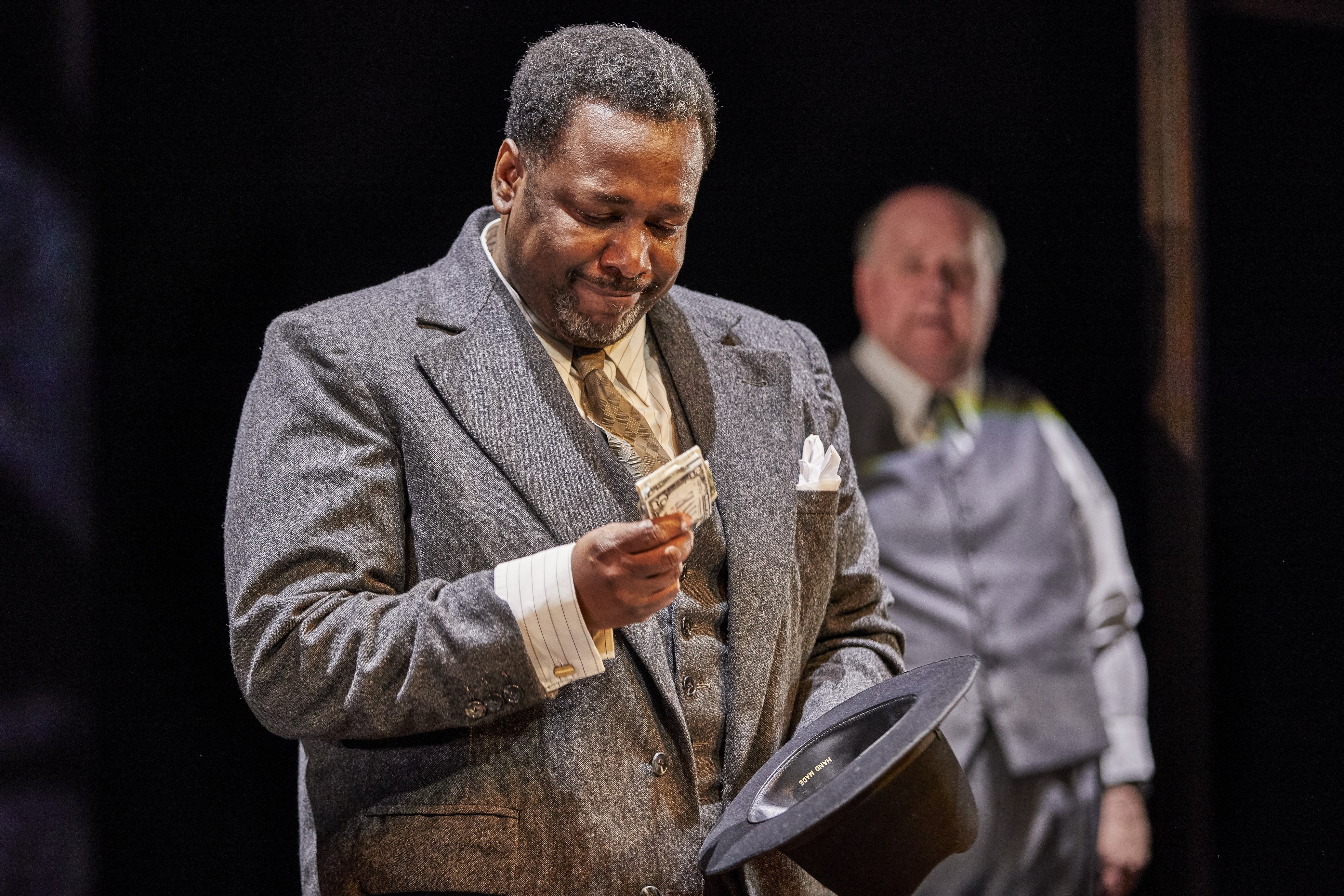 Death of a Salesman at the Young Vic

Wendell Pierce gives an astonishing performance in this enthralling revival of the Arthur Miller classic. With a fantastic supporting cast, Marianne Elliot and Miranda Cromwell’s latest joint venture is an absolute triumph with acting at its absolute finest.

This new take on Death of a Salesman keeps the location and timings as originally written. The decision to cast the Loman’s as an African-American family, in many ways makes no difference to the story at all, but at the same time changes it completely. The script for this production remains unedited and yet the odd pause here or slightly altered intonation of a line there, adds a whole new element to the struggles Willy Loman and his family face. The key themes explored in the play of dreams, hope and deceit, remain intact, they are just heightened and added to by the racial tensions pertinent in 1940s New York. In fact, there are a few moments in the play, such as when a waiter leads Happy to a table at the back of the restaurant rather than his chosen table at the front, where it is almost hard to believe that Miller didn’t have a black family in mind when writing.

Wendell Pierce embraces the complexities of the play’s anti-hero admirably, funny and charming early on, but also spitefully cruel and angry when required. When transitioning into the past and his memories, you can really see how tortured his mind is by the mental illness the character is battling. Willy Loman is written to be someone who you reluctantly get behind and Pierce balances this conflict well, allowing just enough kindness and underlying love for his family for you to forgive his failings and deception. The second act scene where he begs Howard for a New York job is a particularly excruciating to watch.

Sharon D Clarke gives an effortless performance as Linda. She is just perfect as the loyal and loving wife of the flawed Willy. Her presence on stage is captivating, saying so much with just her stance and facial expressions. As a huge fan of her work in musical theatre, it was also very satisfying to hear her deliver the line “Should I sing to you” to her husband. Music is actually quite a prominent feature in the production with the cast opening and closing the show with the hauntingly beautiful gospel song “When the Trumpet Sounds”. Shifts in mood throughout the play are accompanied by subtle changes in musical style, further adding to the atmosphere. While the whole cast could be commended individually if space allowed, it would be wrong not to give credit in name to Arinze Kene and Martins Imhangbe as Biff and Happy respectively. Kene in particular gives a deep and conflicted performance, climaxing with a powerful argument with his father late in the show.

It feels slightly odd to use such terms to describe the set, but Anna Fleischle’s design is peaceful and calming. Windows and doors hung visibly above the stage slowly move into place around the action. Aideen Malone’s lighting is effective in both setting the scene and the tone, and is instrumental in the contrast of the present day and past scenes. The flashbacks are directed as if they were photos in a projector, with the actors creating tableaus between the dialogue. While the technique looks quite striking and helps deliver the message that these are Willy’s memories of the past not necessarily reality, it does make the action a little trickier to watch.

Elliot and Cromwell have proven yet again to be a winning duo at the helm, with this fantastic reimagining of a twentieth century classic. The performances across the board are just wonderful and Wendell Pierce’s UK stage debut is certainly one to remember.