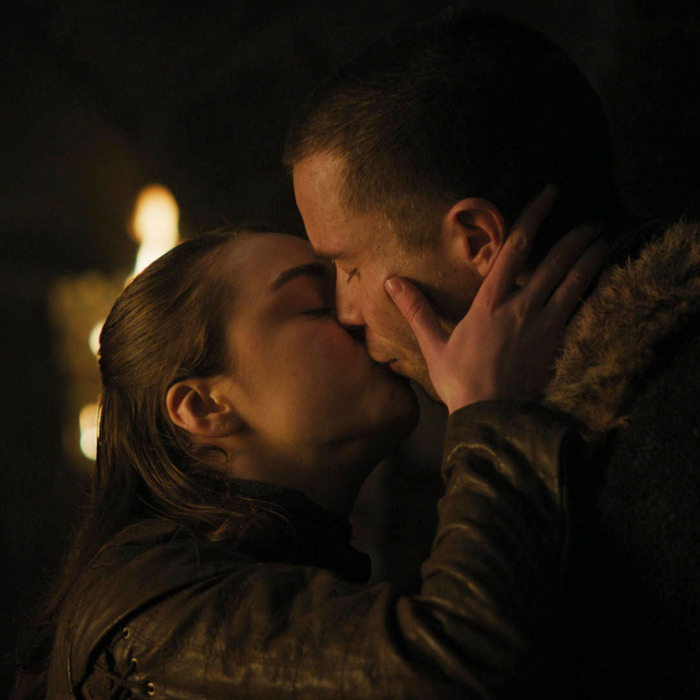 Game of Thrones: A Night in the Seven Kingdoms

It’s the night before the army of the dead descends on Winterfell. Since we’ve got a lot of characters and issues to resolve before our 83 minutes of bloodshed next week, HBO opts to present us with the slump of dialogue we’ve come to expect in the second episode of the season. Brienne gets major validation and knighthood. Jaime runs the redemption road with…pretty nearly every Stark he can. Tyrion and Bran have a fireside chat (that we don’t get to see, oddly enough) and Jon finds a uniquely poor opportunity to tell Dany that he’s her nephew and has a better claim to the Iron Throne than she does. It’s a lot of talk, talk, talk, most of it grim, and glum, and characters musing on whether or not everyone is going to die in the morning.

I run into a rather large issue with Arya. Watching her and Gendry together in earlier seasons, it’s clear they were going to end up together. But they’ve both been on very different paths – more importantly, they’ve both been presented to the audience in very different ways. Gendry’s presence has really been more of an absence. He’s been a plot prop to throw around between the Night’s Watch and the Lannisters and Stannis and the Red Woman and the Brotherhood and anything else as needed. Gendry has whatever dimension the show has needed him to have, because he didn’t really get a chance to have a character of his own. He’s just…a good guy, I guess? With some sweet abs. And he knows how to swing a hammer. And make things. Pretty sure that’s about it.

Arya, on the other hand, is an EXTREMELY well-defined character. Her storyline has continuously been one of the most exhilarating, bloody, and far-reaching of all the Starks. She’s gone through childhood into assasinhood, and become a strong, capable figure worth fearing (even if she holds herself in rather high opinion). It makes her relationship with Gendry really fun, as she takes charge and teases him, with knowing looks and all the tropes of teeny romance. Even if neither of them are teens, Arya certainly still looks like a teen, Gendry certainly still acts like a teen (whinging!), and both of them treat their romantic feelings for each other like teens. And then they have sex.

I confess, it was a jarring moment. Of course, Arya is 18 in the story. Of course, Maisie Williams is 22 in real life. Of course, it was inevitable that somebody was going to have sex in this episode. There’s a lot of commentary on the internet about how it felt a little too child-bride-ish, about how Arya looks to young to be considered sexy. But it’s all part of the same problem – the sexual dimension that the show operates in has only ever included Arya tangentially, never as a main, for lack of a better word, ‘participating’ figure.

Consider season five, when Arya sneaks into the brothel to spy on and later murder Meryn Trant. She’s presented as wide-eyed and curious, still learning, still a child. When she wears one of the Faces to be one of the girls presented to the disgraceful Kingsguard, she doesn’t react to his sexual violence like the other girls, but remains silent, still observing, still waiting. His death at her hands is definitely seen as the deserved punishment for the sexually violent. Walder Frey, murderer of unborn babies and notorious lecher, dies at her hands. Rorge, who promises to fuck her bloody, dies at her hands. Polliver, who lets his men rape as they please, dies at her hands. Arya has been a sexual avenger in this way, appearing only to give these criminals their just desserts, as the show suggests.

For her to suddenly be a sexual figure herself is a pretty rough transition, and presents an inconsistency in her character. It’s clear that Arya is more than a killer – otherwise, she would have truly become a Faceless Man. Arya has always remained fundamentally Arya, no matter how many times her Stark-ness got her in trouble or how many times people tried to grind it out of her. But when has she been a sexual figure in any way? What’s in her character to support her sudden transition, other than her teen crush on Gendry? And why at literally the eleventh hour, before the ‘major’ plot of season 8 kicks off, with four episodes to go, does Arya decide to have sex, to “see what it’s like?”

The show’s answer to all of these questions is the same – tomorrow, everyone could be dead. That’s their justification for Podrick to become a better fighter, to sing a literal swan song. That’s their reasoning for Sansa and Dany to get more friendly, and more fearful of each other. That’s how they make Theon show up at the last damn minute to be the hero he was supposed to be all along, when for a good portion of the show, he really wasn’t heroic at all. And that’s why Arya has sex, and the show calls it just another night in the Seven Kingdoms.