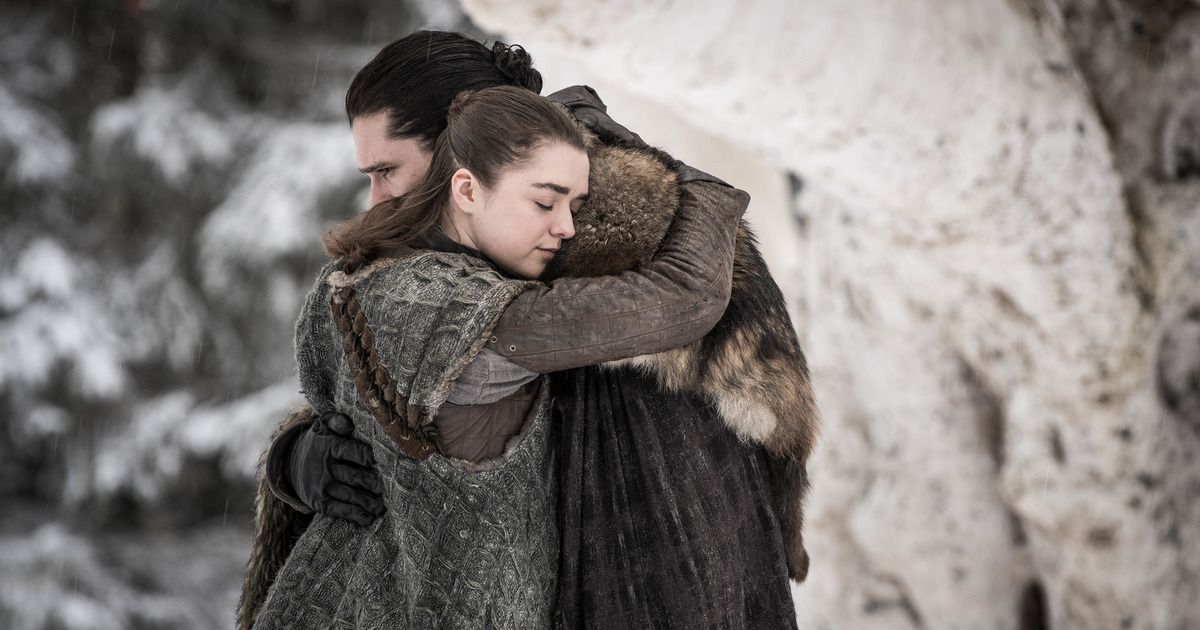 Game of Thrones: Winterfell and Mirrors

I’ve been thinking about mirrors a lot, recently. As symbols, mirrors are often interpreted as portals, doorways, access points to realms beyond or just different spaces. They’re also revelatory, providing insights, opportunities for reflection, a stark look at who we are at the surface level. We place a great deal of trust in mirrors, to show us the truth, plain and unvarnished. But I think that the work of a mirror goes a bit deeper than that – not just a sense of truth-telling, but truth-welcoming, for as we approach the mirror, the truth becomes more distinct.

With that, welcome back. Welcome to season eight. Welcome to Winterfell, once more, a mirror for season one, episode one. As a king and queen came north in the beginning, so do a king and queen come north in the end. The big difference, of course, are the dragons, and the episode makes sure you notice them, what with their dietary necessities and peeping-Tom proclivities. It’s almost an awkward mirror to Jaime and Cersei in the broken tower, with Bran watching.

Ahem, but back to mirrors. One of the strangest feelings we have when looking into the mirror is the sense of another person there, watching us back. This episode creates a similar feeling with many of the reunions. Jon and Sansa are both Starks, but they’re also Targaryens, Lannisters, even Boltons. Their reunion is one of the broken mirror, where they are one reflection split into many forms. Tyrion’s nonverbal reunion with Bran is one of my favorite mirrors, because it sums up with a mirror does best – help recognize one’s self. Tyrion already established the connection between them in season one, with his soft spot for cripples, bastards and broken things. Now, after all Tyrion has been through, he sees Bran on his ascension to Three-Eyed Raven-hood, and still sees a boy in a wheelchair. It’s both recognition of physical reality and failure to realize that what Bran is goes beyond physical definitions.

But let’s be real, the best reunion we could have asked for was the three-way meeting of Gendry, the Hound and Arya. A winning combination of piss, vinegar and good old fashioned rich girl sass, all finished in under five minutes. And let’s be clear, the stakes for this encounter were high. The last time Arya saw Sandor Clegane was season four, right before she leaves for Braavos. Both of their characters have changed so much, and in opposing directions – the Hound, learning the value of his life, and Arya, learning the many faces of death. His words to her are harsh, but the look in his eyes is sad, a recognition of the fact she’s become like he used to be. He’s said it himself, it takes a cold bastard to live in this world for long. Whether or not that’s what Arya is, that’s how he expresses it to her, in terms he’d apply to himself.

Arya, though, still suffers from the same flaw she’s had since the beginning – the inability to recognize herself in others. For her, the mirror is always one-way, only showing one outcome, one option, one possibility. Arya gets brief moments of recognition, but it’s always couched in rebellion – this is who I am, this is who I am not, don’t try to change me. She sees the Hound and it’s complicated. She robbed him and left him to die, because part of her couldn’t keep him on her list. It’s clear to Arya the man he was when she met him is not who he is anymore. At the same time, the list is the list is the list, and his name was on it. There’s only one way to take a name off that list, and it involves the pointy end.

As for the meeting with Gendry, well, teen romance is still all the rage in TV and movies these days, and there are worse things than a Stark and Baratheon getting paired off.

Game of Thrones has always been a show about mirrors. Aegon’s original conquest is a mirror to Dany’s. The Night King’s invasion is a mirror to the first war the First Men fought against them. Bran the Builder to Bran the Seer, Lyanna Stark to Lyanna Mormont, wars between kings, wars between queens. It’s important to not get lost in these reflections, though, and to remember the current moment, what’s happening now. Because another word for mirror is the looking-glass, and it’s important to keep looking if you want to see what’s coming.