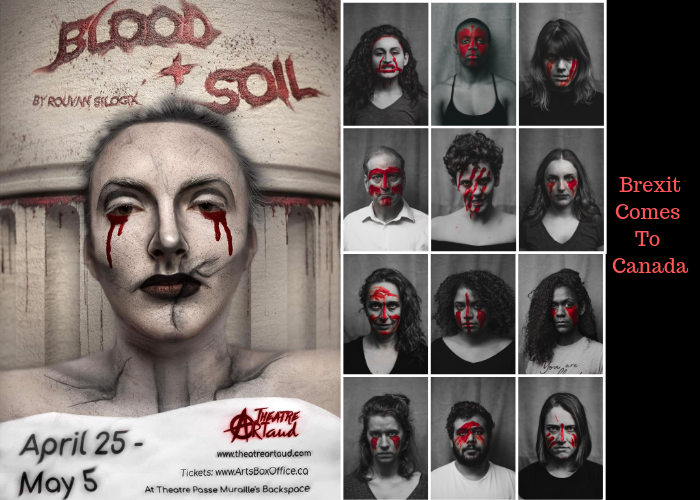 Are you worried about the state of the world? Good. So is director/playwright Rouvan Silogix. We caught up with him to get the inside track on his latest work with Theatre ARTaud, a surrealist theatre collective run entirely by artists-of-color.

Tell us about the origins of Blood + Soil and how the script came to be.
“The future comes too fast, and in the wrong order–“. White supremacism and rising fascism across the world continue to be a key human issue. In our opinion, the modern day surge is strongly rooted in the erosion of the socioeconomic middle class, and the terrifying, and exponentially increasing wealth gap experienced around the world.

Our question is– are human beings essentially doomed to fall into Ancient Greek-like pitfalls such as greed, selfishness, and ignorance, that bring about conditions where these frightening developments seem inevitable; or have we as a civilization let these things happen, and can we stop it by changing who we are?

Taking our band of characters (a small town), and isolating them via creating their own Utopia, we pose a number of questions about the human soul, and what the “tipping points” can be for any society.

As with Dystopian art, it’s more about ‘how’ similar, rather than ‘how’ different– as goes with what connects the Alt-Right, Nazis, the KKK; and the show hits closely to home.

Why is this a can’t-miss production?
We like to think of the show as Lord of the Flies meets Ionesco.

Despite the serious and philosophical undertone, the piece itself is presented in a very lighthearted, farcical manner (with some shocking moments). We are, of course, Theatre ARTaud, and our artistry is propelled by an accelerative thrust that attempts at fresh artistic forms, and bringing together different artistic disciplines. We like to tickle artistic imaginations– and this show is additionally an attempt at that!

There is of course, a long history of secession movements in Canada (from Quebec to Alberta), and our thought experiment hits eerily close to home. Given the victories of Doug Ford, Jason Kenney, and impending federal elections, we think the subject matter is more important than ever – about how ideals can be manipulated and mutated to enact not what they mean.