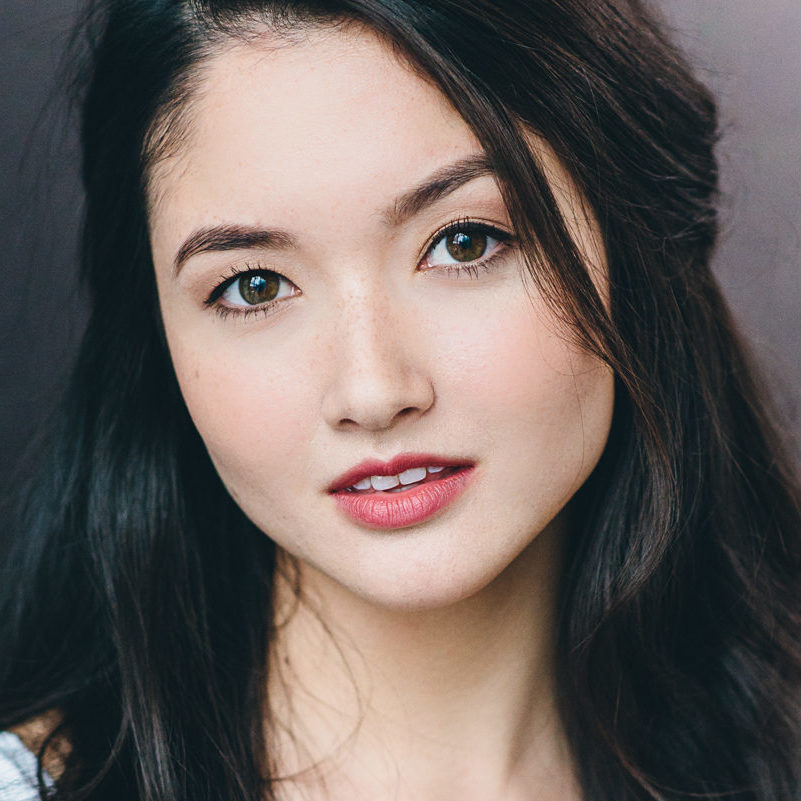 Cynthia Jimenez-Hicks had one of the most deceptively difficult challenges of the Girls Like That cast- how to portray the Queen Bee with both criticism and vulnerability in a play about the dangers of the hierarchy. She rose to the challenge and humanized the most intimidating girl in school.

Cynthia next appears in Kat Sandler‘s The Party/The Candidate opening tonight at the Citadel in Edmonton- get your tickets HERE.

What’s your favourite piece you’ve ever worked on?
Hard to pick one! Girls Like That was definitely one of my favourite experiences. There is something so rare and special about being in a company of all women, led by brilliant women.

Do you have a dream project?
Oh so many. Currently… it would be to work with Shonda Rhimes on literally anything. Preferably with Sandra Oh in it as well.

The play as-written doesn’t assign lines or define who the characters are. Tell us about the development of your character.
My character was nicknamed Pop or Popular. She started from the idea of being at the top of the oh-so-relatable “female pecking order.” Beginning with the archetype of being the most popular and powerful one in the group, she evolved as I learned about my dynamic with the other girls. One of the most important things about discovering Pop was finding what the complete opposite version of who her external persona was. As I remember feeling in highschool, so much of Pop’s actions came from a place of deep deep insecurity. As everyone else’s base archetypes evolved in rehearsals, we had the unique joy of creating our own characters in the world Evan built for us.

What were some of the key conversations you had with your director Esther Jun in developing your interpretation of the piece?
One of the main conversations I remember having was about the power of girl power, both for good and for bad. We spoke about how easy is it for a group of girls to come together to tear someone down in an attempt at feeling better about themselves. Then on the flip side, how amazing it is when girls come together to stand up for each other.

Tell us about the creation of those show-stopping dance transitions and what they brought to the piece tonally.
Creating the dances was exhilarating and exhausting. Alyssa Martin is a GENIUS and a GODDESS. It was an honour to perform her choreography. Her movement gave us an opportunity to see into the world of these girls from a new perspective. On stage we got to feel like rock stars in a Beyonce music video while giving the audience a glance of high school girls internalizing pop music and culture.

For a lot of women, the play felt extremely personal. What were some of the ways you brought your own experiences to the material?
We shared many stories from our own personal high school experiences; everything from our own regrets and humiliations, to first loves and losses. We reflected on what we wish we could tell our younger selves. We shared personal stories of being bullied or having crushes on boys, and found fun ways to incorporate both the bullies and the boys into other characters in Girls Like That.

A big thing that always felt very real to me was the female pecking order. I remember this concept truly taking over my life growing up. I was so intimidated by the girls above me in the pecking order that I became obsessed with needed their validation. I found it liberating in this process to re-examine how/why pecking orders exist in female relationships.

Considering the speed at which technology evolves the issues in the play, did you do much research into the experiences of teenagers today compared to when you were in high school?
Without revealing too much about our ages… let’s just say we often said a variation of, “thank god I am not in high school with social media nowadays.” One of my favourite parts of research was following British influencers on social media. It was great for both accent research and for learning how to contour!

The production inspired extremely polarized reactions. What is your response to the criticism the play received?
I think theatre eliciting a polarized reaction means we are doing our job. We create theatre to start conversations about complicated topics. Critiquing theatre is part of our work.

For Girls Like That, at the end of the day, I am grateful the Tarragon Theatre programmed this show and created jobs for a mostly female creative team, as well as cast seven young female actors (all making our Tarragon debuts). As we said in the show, “Us girls need to stick together.” When women support other women, powerful things happen.

Did you get a chance to speak to any teenage girls who saw the production? What was their reaction?
One of the best parts of the school matinees was when the students got excited when a song would start for our dance numbers. There were always a handful who would would dance along with us in their seats.

However my favourite memory of their reactions was being complimented on how diverse our cast was. Representation is so important, especially for young people seeing theatre. Knowing that there were students who felt represented on stage is something I prioritize in my work.

Did you have a favourite moment in the production?
In our final dance number there was a pseudo improvised section where one of our movement intentions was being attacked by bees. Getting to do this every night (and watching my peers do it), was a true gift.

What are you working on now/next?
I am currently working on two new plays at the Citadel Theatre in Edmonton. The Candidate and The Party both written by Kat Sandler. We are one cast, doing two plays, at the same time, in two different theatres! It’s a pretty wild ride. We open April 4th!