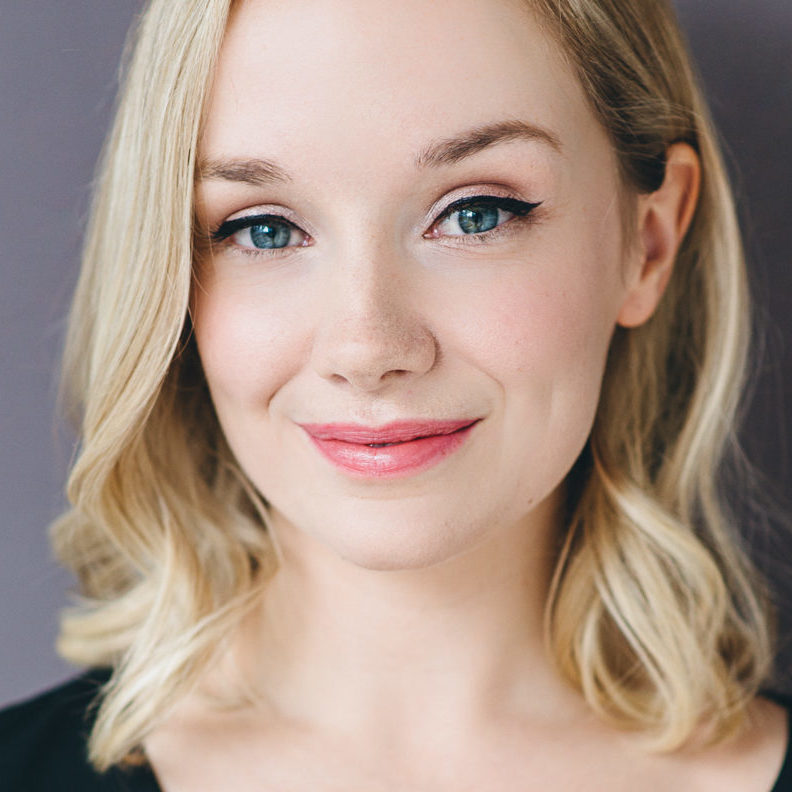 Lucy Hill’s dynamic energy stood out as her character balanced vulnerability and aggression as both a member of “the pack” and an individual struggling with her own complicated inner life.

Can you remember your first experience with theatre?
My mom took me to a family drag show in Edmonton. I remember seeing one of the queens after the show in partial drag, and that very much blew my mind.

When did you know you wanted to be a performer?
I remember seeing The Shape of a Girl by Joan MacLeod at the Globe Theatre and feeling my world shift around me. It made me look at myself and think about the kind of person I wanted to be. Experiencing how transformative theatre can be made me want to be an actor. Shout out to our Canadian Treasure, Joan MacLeod!

What’s your favourite piece you’ve ever worked on?
I did the solo, half-mask show I, Claudia by Kristen Thomson, directed by Ann-Marie Kerr, at the Globe Theatre in Regina and Neptune Theatre in Halifax. It was exhilarating.

Do you have a dream project?
I love working in ensemble pieces like Girls Like That, that pack a punch. I did a show called The Tragical Comedy of Punch & Judy at the Caravan Farm Theatre a few years ago where we all played different puppets that came to life and put on a musical version of Oedipus Rex. I loved how stylized and weird that show was. More projects like that!

How did you get involved with Girls Like That?
I did the Tarragon general auditions, then auditioned specifically for Girls Like That. There are five monologues in the play so for the audition, we got to pick which one we wanted to do. In the end I did ‘The Pilot’ monologue in the show which I hadn’t chosen in either of the auditions, but I had such a blast playing her.

The play as-written doesn’t assign lines or define who the characters are. Tell us about the development of your character.
We were each given an adjective from Esther as a starting point to describe our character. From there we went through the whole script together and talked about who would say what and expanded our characters from there. The show is about that mob mentality of girls and social media and how standing out from the group can make you a target, so while we were each an individual character, we were also collectively playing the character of “the pack”.

What were some of the key conversations you had with your director Esther Jun in developing your interpretation of the piece?
Esther created such an open and safe environment for us all to have big conversations about what it means to each of us to be a woman, and how external influences shape us, whether we want them to or not. We shared a lot of stories of our high school experiences with each other as well as talked about the many challenges girls face during that time in their lives. The role of social media in the play was also a big topic of discussion.

Tell us about the creation of those show-stopping dance transitions and what they brought to the piece tonally.
Alyssa Martin, our choreographer, is incredible! Each cast member was coming into this show with a different amount of dance experience, and she made it so fun and inclusive for all of us. She also uses the best images for her choreography such as “the soft glove” and “peanut butter hands”. The dances added a really unique element that showed another side of these teenage girls.

For a lot of women, the play felt extremely personal. What were some of the ways you brought your own experiences to the material?
I remember in school feeling so much insecurity about fitting in, just like the girls in Girls Like That. And that at different times I was in a different place in the preteen “hierarchy” — I was sometimes a bully, or a victim of bullying, or a bystander. I held all three of those within me at the same time. All that was helpful to keep in mind for my character in Girls Like That.

Considering the speed at which technology evolves the issues in the play, did you do much research into the experiences of teenagers today compared to when you were in high school?
We all did our own research on this topic, including observing how teens interact on social media. We also talked a lot about that in rehearsals and the unbelievable influence and power it has over young people.

The production inspired extremely polarized reactions. What is your response to the criticism the play received?
We all felt so proud of our work, and the team of artists behind the show. Esther assembled such a diverse and strong group of artists and I feel lucky to have been a part of it.

It was interesting to me how people on social media were expressing strong opinions about our show without having seen it. Of course everyone is going to feel differently about a show, but I would hope that people would come to see it first, before taking a stance on it.

Did you get a chance to speak to any teenage girls who saw the production? What was their reaction?
I loved doing the student matinees. The theatre came alive and the students were so engaged — it felt electric. And I was so impressed with how open they were and how they could talk about the show in a really balanced way. Many girls saw themselves in both the “pack” as well as in Scarlett. Some girls spoke up and said they were the “Scarlett” in their own school and said how much it meant to them to see themselves onstage. We also had a few boys say they saw themselves in the show as well!

Did you have a favourite moment in the production?
Dancing to Beyonce’s “Run the World”!

What are you working on now/next?
I just finished doing Joan MacLeod’s one-woman play Gracie at The Globe Theatre in Regina, my hometown. And now I’m finishing up post-production with my team for the short film I wrote and produced called Shut Up, which is about the imbalanced gender dynamics in a theatre rehearsal.

Do you have anything you’d like to add?
For me Girls Like That encompassed everything an ensemble should be. We each arrived on day one with such varied paths that got us there but had so much love and respect for each other. We all jumped in together with both feet and held each other tight throughout the whole process. It was a very demanding show technically between the fast-paced shared narration, the high-energy dance sequences, and the heightened style of the piece. I’m so proud of what we accomplished as a team.