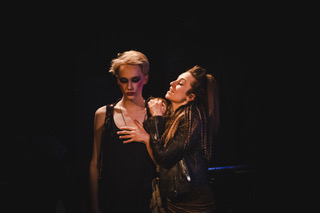 Call Me Vicky at the Pleasance Theatre

Call Me Vicky, the debut play from sisters Nicola and Stacey Bland is based on an entirely true story and is an absorbing, well-written and thought-provoking production. Set in the 1980’s, the play tells the story of Martin, played by the talented Matt Greenwood, who is transitioning from male to female, and the struggle of trying to be your true self in a time of adversity and ostracism. With strong performances from the cast and a tightly-written script, Call Me Vicky at the Pleasance Theatre is a confident and enthralling debut play, only let down slightly by the staging and sound work which distracts from this compelling story.

The play opens on Martin and best friend Debbie, played by playwright Nicola Bland, getting ready for a night out at The Golden Girl – a drag club in Soho owned and run by Fat Pearl. Fat Pearl, played by the hilarious Ben Welch, acts as both a boss and a mentor to Vicky (Martin), as well as her friend Gabby, played by playwright Stacey Bland, who works at the club. Throughout the play we see Gabby’s struggle with drug abuse and how Vicky’s attempts to help lead them both down dark and dangerous paths.

The strength of this play lies in the strong performances from lead role Vicky and Fat Pearl. Greenwood does an excellent job portraying a frustrated and vulnerable teenager trying to find their place in a world that doesn’t want to accept them. Emotional moments, such as being visited in prison and discussing Vicky’s childhood with her mum, played by Wendi Peters, showcase Greenwood’s range and acting talent and are big emotional hitters. Welch too gives a confident performance with great comedic timing, delivering both the written lines and improvisations “on stage” at the drag show, excellently.

One downside of the playwrights creating such detailed and realistic characters is that too much time is spent dealing with other characters’ backstories. We learn about Gabby’s issues with her child and husband, as well as Debbie’s relationship, and even Vicky’s mother’s illness. Although interesting, these stories distract from the main narrative of Vicky’s journey and just serve to make the play longer and forcing the writers to add extra scenes to tie up all the loose ends.

Another issue is the staging and setting from Director Victoria Gimby. Although exciting that the stage is actually set in The Golden Girl nightclub, with the audience getting stamped at the door and sitting onstage at club tables, the production never takes this idea further. There are no real interactions between audience members and actors, which feels like a wasted opportunity. Having a separate “stage” onstage surrounded by audience also limits room for the actors to perform and leaves it up to the music to illustrate when characters are inside or outside the club. The music choice is obviously a good tool for distinguishing the 80s era, but also means that the volume has to be constantly raised and lowered to allow for dialogue which becomes distracting.

Overall the play is a colourful and heart-warming production, with some amazing performances and an engaging and well-written script. Occasionally hard to watch but extremely rewarding, Call Me Vicky is an enthralling debut production from playwrights Nicola and Stacey Bland, that truly highlights the importance of friendship in hard times and how the journey to be your true self can be the hardest but most crucial step in your life.