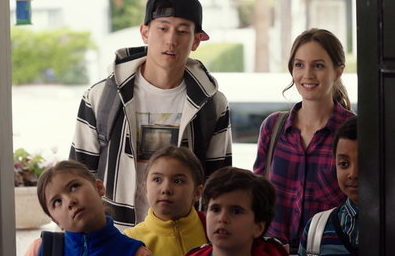 The best new show of the fall TV season so far is Single Parents, the latest addition to ABC’s single camera family comedy lineup. Though rarely groundbreaking, this phase of the alphabet network’s comedy strategy has produced strong show after strong show and this offering from New Girl impresario Elizabeth Meriwether and co-creator JJ Philbin might be the sharpest yet.

Like its network mates, Single Parents starts with the solid foundation of a killer cast, headed by SNL‘s Taran Killam and Gossip Girl‘s Leighton Meester (Brad Garrett’s also floating around but, as of the pilot, he’s the least interesting main character so I’m just planning to ignore him for now). Meester was captivating in her run as Gossip Girl‘s most interesting character by miles and it’s fun to see her re-contextualized as more of an everyperson (or as much of an everyperson as someone with that face could ever be). As a single paralegal determined to protect her oddball son from heartbreak, Meester’s easy charm sets the perfect tone and she fires off the script’s zingers with delightful snark (it feels somehow relevant that Meester is married to all-time-great TV snarker Seth Cohen and Philbin’s a former OC writer).

All the single parents in the established crew of mutual babysitters and classroom volunteer assignment avoiders are pretty cool- Kimrie Lewis a scene stealing no-nonsense forward thinker, Jake Choi a hip 20-year-old new dad figuring it out as he goes- so when Killam shows up with his charmingly old-before-her-time daughter to the first day of first grade all overwhelming keener craziness and all-in parental dorkiness, they’ve got some making over to do. Killam brings his sketch background to the table and leans in hard to his character’s walking dad joke vibe but he knows when to pull back and make sure to play the heartbroken person behind the sparkly mermaid bag full of snacks.

Elizabeth Meriwether is coming off of creating and shepherding for my money the best sitcom of the decade. New Girl was sharp, fresh, big-hearted and unyieldingly funny. It was grounded in honest characters and totally unafraid of letting those characters grow and change and screw up and move on. New Girl ended up somewhere totally different than where it started, adapting to actor chemistry and real world events and production realities as it went along. Single Parents has all the fun and heart and awesome actors that made early New Girl stand out. And, if I know anything about Meriwether, I expect it will only get better from here.