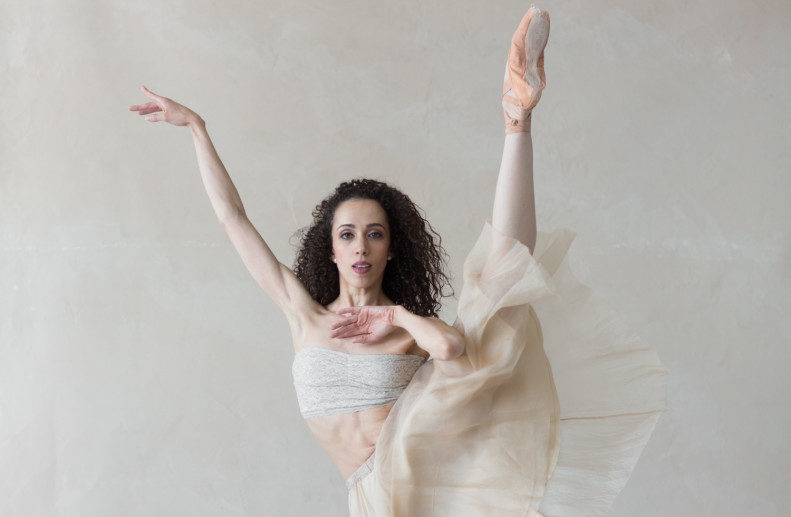 National Ballet of Canada First Soloist Jordana Daumec is a strong technician and a subtle, affecting actress. She has charmed audiences with her performances in featured roles that include Young Shepherdess in The Winter’s Tale and the Female Lead in Symphony #9, but was a revelation in the role of Bronislava Nijinska. In John Neumeier’s Nijinsky, her emotional Act II solo displayed a fierce anguish that was utterly captivating, earning her an Outstanding Ballet Performance nomination in the supporting category.

Do you remember the first ballet you ever saw?
It must have been The Nutcracker or some kind of Balanchine ballet, since I’m originally from New York.

Did you watch ABT or the New York City Ballet at all growing up?
They were my dream companies growing up as a little kid because I was surrounded by those people all the time in New York.

What made you want to become a ballet dancer?
My mom was actually a modern dancer, so I grew up in the studio. I was always dancing around and it just felt right. I loved it so much that mom and dad put me in ballet.

In your time with the National Ballet of Canada what have been some of your favourite moments or performances?
The first time that I ever performed the role of the Bee in The Nutcracker is a highlight. It was one of the very first solos I ever did and I loved the thrill of it. I knew this was exactly where I wanted to be and that I wanted to continue getting better and better so I could do more things like that.

You’re nominated for your role as Bronislava in Nijinsky. Can you talk a little about the physical and emotional challenges of the role, and particularly that powerful second act solo?
I have to say it’s one of the most emotional solos that I’ve ever had to do. The ballet as a whole is a roller-coaster of emotion, but there’s just something about that solo, especially in the second act. I took it on and put my own little twist on it where not only was I myself going insane in the solo but I was watching my brother in the ballet going insane as well. I kept trying to look at him and feed off of that feeling of watching a family member or a friend hurting or going through something and that pain that you feel and I tried to bring that out and put that into the solo so that people could see it.

Do you have a favourite moment in Nijinsky?
It’s definitely that solo in the second act. There are no words for it. The thrill you get right before going on stage to do it, the kind of pain that your body is going through during it, and that feeling when you come offstage of utter exhaustion, that’s what dance and your art form does to you, but kind of all-in-one.

You’re also nominated this year as part of the ensemble of Genus. Tell us about that ballet and working with the ensemble.
That one was such a fun piece to do together because everyone was dancing their own little part but you’re creating this larger scene. You feel that music pumping through your blood and it gets you riled up and the choreography pushes your body to its physical limits and everything together makes it so powerful and badass!

You’ve talked a lot about the physical toll that it takes on your body and the physical limits that you are pushed to. What would you say is the hardest part about being a ballet dancer and what is the best thing?
I think the hardest thing is not to let the audience see whatever injuries or pain you’re going through. Depending on the role you’re doing, if you have to smile, just not letting them see that you’re dancing on a sprained ankle or that you have a blister so bad that it hurts to walk. I think the hardest thing to do is to really show the character and not show who you are in a character role. And the best thing is that feeling of dancing on stage and having thousands of eyes on you, that’s something that I just love. Giving my art and my love of my art and knowing that people can do it and see it is the best feeling in the world.

Do you have a favourite costume that you’ve gotten to dance in?
The tutu for the black swan in James Kudelka’s Swan Lake is one of my favourite tutus. It just hugs you perfectly and you feel like you can move. Normally I find tutus restrictive; Because of the boning and the lining and everything that’s in it, you don’t really move as well as you do when you’re just in a leotard, but that tutu feels like a second skin. It gives you power when you’re wearing that on stage, especially when all of the women are on stage together. You feel great.

Who is your favourite choreographer to work with?
We’re so lucky at the National Ballet to be able to work with all of these famous choreographers. I love working with James Kudelka. This year was the first-time I got to do the lead Spring woman in The Four Seasons and that was a dream come true. It’s one of my favourite ballets and was a highlight for my career.

Do you have a role you’d love to dance one day?
I love Don Quixote, so Kitri in Don Q I think would be the most fun. It shows all the different sides of character and classical ballet, and she’s fiery and spicy and has a great jump, which is something I’m really proud of that I have.

Who’s your favourite partner in the company?
There are so many! I have to say, dancing with Brendan Saye in The Four Seasons was so beautiful. He danced the lead Man and I was Spring. There’s just something about dancing on stage with him that made it even more… when I looked him in the eyes, he was really there and I felt what he was giving to the rest of the audience and also the personal things that he was giving to me as well. Right now I’d say after dancing with him that was a pretty amazing experience.

Do you have an all-time favourite ballet?
I’m going to say The Four Seasons.

Is there anything else you’d like to add?
I’m just really honoured that you guys loved what I did with Bronislava and that I was even nominated. That’s never happened to me before so it feels really good to know that someone out there loved what I did with the role. It’s really meaningful.