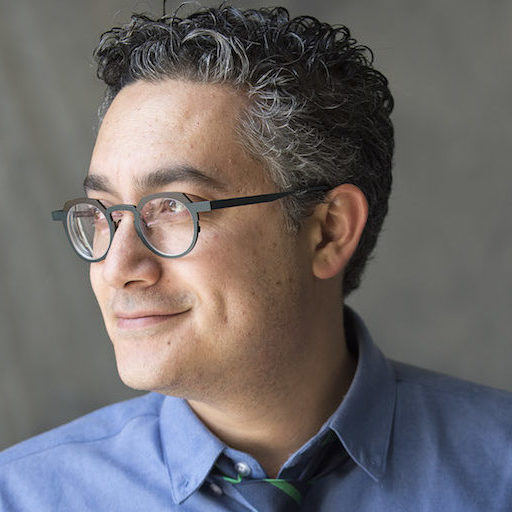 Before we announce the winners of the 2017 MyEntWorld Critics’ Pick Awards, we’re proud to present our annual Nominee Interview Series

Multi-hyphenate performer and designer Alessandro Juliani was blackmailed into creating the Outstanding Sound Design for Middletown at the Shaw Festival. Or so he claims. His partner of 15 years Meg Roe directed the stunning soon-to-be-remounted production in the round in the Shaw’s studio theatre and recruited Alessandro to compose original music and design the atmospheric soundscape that helped define Will Eno’s eccentric commonplace little town. His work was the perfect subtle, clever complement to a truly mesmerizing piece of theatre.

Do you remember your first experience with theatre?
I’ve been told that as an infant, I used to sleep under the box office… like at the feet of the ticket vendors, when my parents were doing their experimental theatre in the 70’s in Vancouver. No one called child services, I guess? And a life of abuse in the theatre was born!

How did you get into composition and sound design?
I went to McGill University for Opera. Learned to sing REALLY LOUD, but also took some compositions classes while I was there. I ended up a post-graduate under-employed person in Vancouver. Someone dropped out of playing Feste at Bard on the Beach for director Dean Paul Gibson. He knew my background and asked me to play the part and also to write all the songs for the play. I agreed. And a life of abuse in the theatre was reborn!

What’s the most important thing about sound design that people take for granted?
That it exists.

How does your process change when you’re working with a company with tons of resources like Shaw vs. something smaller scale?
They are both the same processes: lengthy procrastination followed by an intense period riddled with self-doubt and plagued by sleep-deprivation. Sometimes a company the size of Shaw has the resources to say “yes” to more ideas, but sometimes the obstructions innate in a smaller scale can spark real ingenuity.

You’re also a performer. Do you find that that perspective influences your work on the technical side of things?
I think they both inform each other. I know the first time I designed, during tech rehearsals, I remember thinking, “…what a bunch of spoiled, self-involved assholes actors are!” So that was some fun self-discovery.

How did you get involved with Middletown?
The director, Meg Roe, has fifteen years of dirt on me. I had no choice.

How much guidance or input came from Meg while working on your design?
She was extremely, extremely, patient with me on Middletown. It took me a long time to crack it. She waited. And trusted. And then guided me to where it ended up. She is an inspired leader. She does have fifteen years of dirt on me … but she really is inspired. She understands how theatre works in a very instinctive way.

When you’re writing a new piece of music for the theatre, are you building character themes like you might with film/tv or are you mostly working off of mood and setting?
It really depends on the script. With Middletown, there was no real need for different characters to have their own themes. We were searching for something unadorned. But with an undercurrent of depth – kind of like Eno’s writing. The very first sketch I did for piano and synth ended up being the well we kept going back to. It just seemed a good fit.

How do the music and sound work in cooperation?
I suppose it’s nice when they’re kind of indistinguishable from one another. That one seamlessly blends into the other. That’s usually what I aim for.

What were some of the practical demands of the production that you had to accommodate?
Just making the sound consistent for audience members in the round. Shaw was good about rigging up some surrounds in the studio so that we could get as immersive a feeling as possible. These things make a difference, even if to most audience members it works on a more subliminal level.

Did you have any big ideas that were edited out for practical reasons?
Not so much practical reasons. More that they sort of sucked. I had this whole slightly satirical doo-wop “Middle-America” vibe going at first. Even taught the cast to sing some vaguely nostalgic sounding a cappella stuff. Like I said, this one took us a while to crack. It wasn’t so much that I had too many ideas. More that they sucked. And then I was drawing blanks.

Were you pleased with how the design worked in practice?
Yes.

Do you have a favourite moment in the production?
Hard to say. So many. I genuinely didn’t tire of watching this show. Something new always surprised or disarmed me.

Do you have anything you’d like to add?
Thanks for championing theatre and the artists that make it.