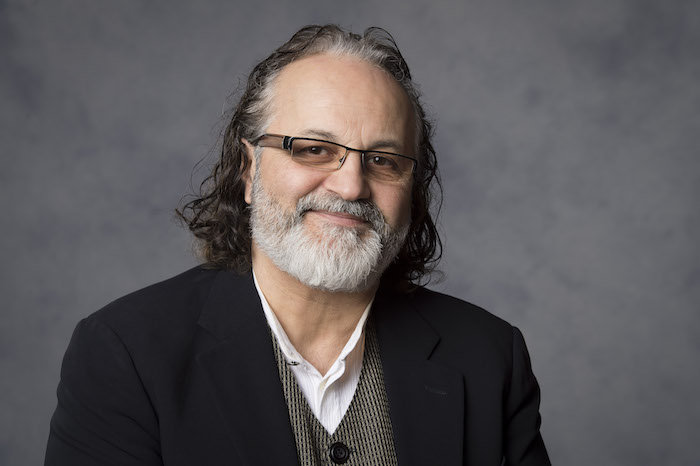 Claudio Vena’s original compositions and Outstanding Sound Design were key components in making Saint Joan the Shaw Festival’s most technically impactful production in recent history. The musically gifted ensemble sang complex choral arrangements acapella and fleshed out the world of the play with a beautifully anachronistic sound landscape that made a massive impact. Claudio’s patient insights into the process and challenges of sound creation for theatre are some of the most interesting lessons I’ve learned this interview series.

Do you remember your first experience with theatre?
I was in grade 6 and our class went to a play at Casa Loma in Toronto. The production had minimal sets and lights, but it did have wardrobe and the actors made their entrances through the audience and included us in the show and it was thrilling to be a part of it and to watch it at the same time.

How did you get into composition and sound design?
Ever since I picked up the accordion, my first instrument, I have always composed. I had my first opportunity to compose for film when Canadian director Jerry Ciccoritti heard some of my music on the radio and asked me to work on the score for his movie Boy Meets Girl. As for sound design, I was involved in the Computer Music Research Group at the University of Toronto in the early 80s when synthesizers were in their infancy and MIDI did not exit. We got to play around and program the huge University of Toronto mainframe computers to create sounds and music and this opened up a whole new world to me.

What’s the most important thing about sound design that people take for granted?
It is creating just the right amount of atmosphere to bring realism to the scene or to transport the scene to a whole new world or dimension. It is the subtle sounds and movements that help the brain believe it has entered a new world. It is not the huge explosions and special effects.

How does your process change when you’re working with a company with tons of resources like Shaw vs. something smaller scale?
With a larger company like The Shaw, there is often more time in the theatre to plan and mix your sounds to get the right placement of the sound source – whether it be behind the audience – and to set the sound stage for the show. There are often more speakers to play with and a better sound system to play back cues. As well, places like The Shaw have a world class team who know their gear and stages really well, so you can often get great ideas from them to help the process.

How did you get involved with Saint Joan?
I had been working with Tim Carroll since 2010 when he first chose me as composer for the production of Peter Pan at the Stratford Festival. It felt like we had a very easy and intuitive relationship in terms of a creative team, and I found his style of directing and his vision very simpatico with how I like to work, so luckily, he felt the same and he has asked me to compose scores for all of his Canadian show so far.

How much guidance or input does he give you for each project?
There is always a great deal of discussion about the vision of the production and the time period, etc. Basically, Tim sets the parameters of the space we will be working in and he then says or indicates for me to provide him with an offer. It is left up to me to come up with the themes or tones. I then play them for him and try them against the scene. If something doesn’t work, he plainly tells me that this particular piece of music may not work for the scene.

When you’re writing a new piece of music for the theatre, are you building character themes like you might with film/TV or are you mostly working off of mood and setting?
I always like writing for characters and, often times, actors that are playing those characters. I come up with little motifs prior to our first meeting, but once we get into rehearsals, that’s when the characters’ nuances begin to pop out and I find that inspires the music. At times, I do have to write music that sets a tone for the scene – it may be something dreamy or militant.

How do the music and sound work in cooperation?
They can be very complementary. Sometimes a great mood setting backdrop of sound effects works even better than a thematic piece of music to create the mood of the scene. In some productions, the sound effects get timed to the music so the actors can synchronize their motions or actions to match the effects, almost like it’s a part of their choreography. The important thing is it should always feel organic to the process.

The choral singing was a major element of the production. Tell us about the development and execution of that idea.
The idea came from both the music of Joan’s time period and a desire to make the score as organic as possible. One of the challenges of scoring and pre-recording a score is that once it is set, it becomes an inflexible part of the show and if the actors do something different, the music will not move to support it. Having the cast sing so much gave the show a very organic feel. Also, we were so privileged to have a wonderful cast of fine singers that could learn a four-part, very complex harmony.

What were some of the practical demands of the production that you had to accommodate?
The cast was predominantly bass and tenor heavy, so I had to be careful about the writing in order to best use the small alto and soprano section that we had. Also, I wanted the singing to start out of nothing, so we worked on the cast finding their pitches from a single bell that might ring. In the last scene when the cast is under the dome and they start to sing, we had to hide the lead voices out behind the box so they could be heard clearly. The box was made from plexiglass and it didn’t allow for the best transfer of sound, so we had to work around it.

Did you have any big ideas that were edited out for practical reasons?
Not really, there might have been some pieces that were cut down substantially from the first on-stage rehearsal until the opening, but that is always normal when the cast gets faster and the sets change and other factors become part of the equation.

Were you pleased with how the design worked in practice?
Yes, very much. I found that being in the period vocally for most of the show, then going to a more dream-like sound design and music for the final dream sequence, and ending the show with a dramatic period acapella song was a nice musical and dramatic arc.

Do you have a favourite moment in the production?
The top of Act II – when the cast slowly makes their way to the stage, find completely arbitrary positions on stage and then proceed to sing a stirring rendition of ‘Beata Progenies’ acapella. They just start together without a leader.

What are you doing now/ what’s your next project?
I am currently working with Tim Carroll at The Shaw on a new production of The Magician’s Nephew which will run this season.