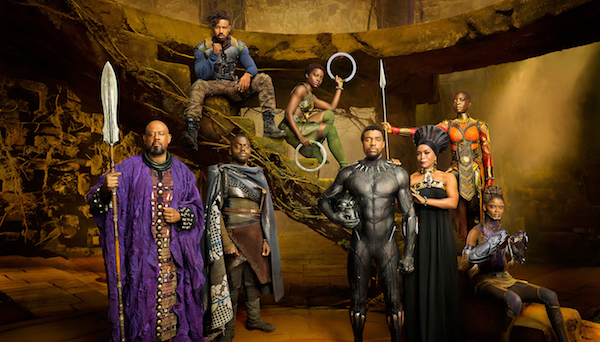 There is a lot to say about Black Panther. News agencies have been reporting the stunning streak the film has had at the box office, clearing $500 million in it’s opening week (and $700 million by the 2nd weekend after opening). Education advocates point out how important it is for young people to see representation in superhero movies, to identify with characters who look like them. The politically-minded have drawn several connections between Wakanda’s isolationism and the Trump administration’s “America First” policies, the most obvious being the post-credit scene where T’Challa tells the UN “In times of crisis, the wise build bridges, while the foolish build barriers.” Even with the first cut of the film hitting the four-hour mark before it was edited (heavily) down to the standard 135 minute runtime, there’s just too much to talk about in one article. Which is why I’m telling you to read as much as you can about Black Panther, not just what I have to say. Because what I’ll be talking about is death and violence in this movie, the ways it matters and how characters interpret it.

Let’s go back to Civil War, where T’Challa and his father make their debut. T’Chaka’s death is tragic, and sparks an international series of incidents. But the personal tragedy it marks between father and son is the most important part of Zemo’s attack on the UN. This isn’t T’Challa’s first time out and about in the world – the man has a PhD from Oxford – but it is one of his first exercises in diplomacy. He’s uncomfortable here, amongst foreign dignitaries who he has been grudgingly dragged in front of. His father dying in the same setting provides the grounds for further isolationism on the part of Wakanda, which T’Challa now rules as king. The foreign aid they supplied to other African nations is withdrawn, with the intent of protecting Wakandan nationals and protesting the work of the Avengers. But T’Challa himself has to stay out in the wider world, to hunt down the man who killed his father. He does this with a murderous single-mindedness that, at the time of Civil War, we understand as emotional, vengeful, blinded by the pain he feels after his father’s death. But Black Panther shows us that it’s more than that.

Let’s consider what we know about Wakanda and the science it uses. We know that bullet wounds are not death sentences here. We know that Princess Shuri can basically cure anyone and anything, whether it’s Bucky’s programming or Everett Ross’ spine. Perhaps Wakanda even has various vibranium-based therapies for disease, congenital defects, etc. This is not to say that Wakanda is free from death, but being raised there certainly gives people the capability to have vast extended lifespans. The very notion of death is a journey to the ancestral plane, something hinted at in Civil War and something we further see in Black Panther (more on that in a bit). In this way, Afro-futurism becomes the most powerful expression of science fiction – they’re so mightily advanced, they have nearly conquered death.

T’Chaka’s death is a painful reminder of that ‘nearly.’ It’s not just a loss. It affects T’Challa’s worldview. When he becomes king, during ritual combat with M’Baku, he gets the upper hand but does not press his advantage. At the edge of the waterfall, in a submission hold, T’Challa offers his foe a way out. He reminds M’Baku that his people need him, and M’Baku gives up. It’s a very kingly gesture, but it’s also a reminder that just because this combat is to yield or to death, yield is always preferable. A few minutes later, when T’Challa eats the heart-shaped herb and speaks to his father on the ancestral plane, he falls to his knees crying like a child, admitting that while he is prepared to be king, he is not prepared to be without his father. He never was – no one ever expects death or sees it coming, for themselves or their loved ones, but Wakanda is a place where death can be kept at bay nigh-indefinitely. It’s not too far a stretch to say that had T’Chaka suffered similar injuries in Wakanda, he could have been saved.

The very notion of an ancestral plane, something not present in any other Marvel film to date, presents us with interesting notions about death. We approach dialogue with ancestors in Tony Stark’s expensive hologram presentation at the beginning of Civil War, but it’s one-sided, more therapy session than soul-searching (not that soul-searching is what Tony’s after, anyways). But an ancestral plane conjures the real notion of an afterlife, a place reachable by ingesting the heart-shaped herb or by the physical passing from our world. Angela Bassett’s character says as much when she reunites with her son. She knows T’Chaka is still with them, despite her son’s skepticism. She says it with conviction, a kind of strength that she draws from faith. It may result in severing them apart, but death creates a deeper connection for her and her husband, and it creates the system of kingship that connects the Black Panther to the generations before him.

Of course, this is where we have to talk about Erik Killmonger. This is a character raised in death, brought up in gangland Oakland. He’s so familiar with the ending of life that in his voyage to the spirit plain, he sheds no tears for his father, because he recognizes death’s presence and feels no emotion for it. This isn’t to say Killmonger is not emotional – he has a terrible anger, he feels the loss of his father deeply. Already isolated from his homeland, Wakanda, isolated for being a black kid in Oakland who believes in fairy tales, his father’s death makes him truly alone in this world. His journey to the spirit world is not about death as a journey, a continuing of the human experience, but death as revelation, as it leads him to suggest that maybe he’s not lost without Wakanda, that perhaps Wakanda is lost without him.

In terms of death, the movie makes it clear. Killmonger has the highest death count, and the scars to prove it. He commits the majority of the murders, he does the majority of the violence against women in Black Panther, and he suffers no qualms about shooting down allies or romantic partners. This is no casual familiarity with death – Killmonger is a practiced artisan, who knows exactly what he’s doing with every blow he strikes. Yet he is not death incarnate. It haunts him, the loss of his father. He remains fearful of his own death. We see that when he burns the garden where he so recently gained the abilities of the Black Panther. He does it to disrupt the chain of governance, as Ross points out, but also as recognition of his own mortality. Killmonger wants to be the last true king, in that way. Once he dies, his vision dies. He cannot stand the thought of a world after him, of society moving on after he passes, so he makes sure that the foundation of the ruling class, the heart-shaped herb, will die as he dies. It’s an incredible statement, and possibly the most iconic shot of the entire film – Killmonger silhouetted by fire, flames licking pillars, stone, the scene framed by two regal panther statues.

And he dies. With “one hell of a move,” Killmonger is brought down, but as many people have noted, Black Panther is less a movie about death and violence and more a film about race, the world, and self-cultivation. This is made evident when T’Challa tells Killmonger he doesn’t have to die, that maybe they can save him. For a brief, beautiful moment, this possibility hangs in the air. One of the quirks of the human condition is that we all hunger for reconciliation, and we have that dream alive for a second. A world emerges where Killmonger is saved. He just goes by Erik, and though imprisoned for his crimes, he has the chance to heal, as Bucky had a chance, too. The possibility of redemption is so near, it hurts all the more when Killmonger turns him down. He pulls out the spearhead and makes his statement: “Bury me in the ocean with my ancestors who jumped from the ships, ‘cause they knew death was better than bondage.” His choice feels so alien to Wakanda – this is a deathless place, after all, and for someone to choose death here is frightful and disturbing. Where M’Baku chooses to yield, live and rule his people, Killmonger chooses to die.

Ultimately Killmonger cannot face a deathless world, because he comes from a world of death. As much as he hungers for Wakandan technology and military superiority, Wakandan traditions and culture remains distant from him. People have commented on the film’s discussion on the divide between Africans and African-Americans, the gaps in knowledge each side has about the other, and certainly this subject fits in that conversation. Many in Africa are unaware of the history of slavery, just as many in the West cannot distinguish between varying African ethnic groups and nations of origin. The future that Killmonger sees is one of Afro-unity, albeit one only achieved through violent revolution and social upheaval. It fails to get off the ground in Wakanda, not because T’Challa kills Killmonger, not because one was more worthy of the mantle of Black Panther than the other, but because the people could not, would not go that route.

There is a moment, where W’Kabi, leader of Wakanda’s border army, is faced down by Okoye, leader of the Dora Milaje, at spearpoint. He looks at her, and asks, “Would you kill me, my love?” W’Kabi, up to this point, has been on the warpath, and if not stopped, threatens to see Killmonger’s mission to the bloody end. But Okoye, the general, the most skilled warrior in all of Wakanda and arguably as big a hero as the Black Panther (if not bigger), looks at him. “For Wakanda?” she says. “Without question.” And he lays down his sword, and his army bows to do the same, because they all know the land of the deathless is worth more than a world of death.