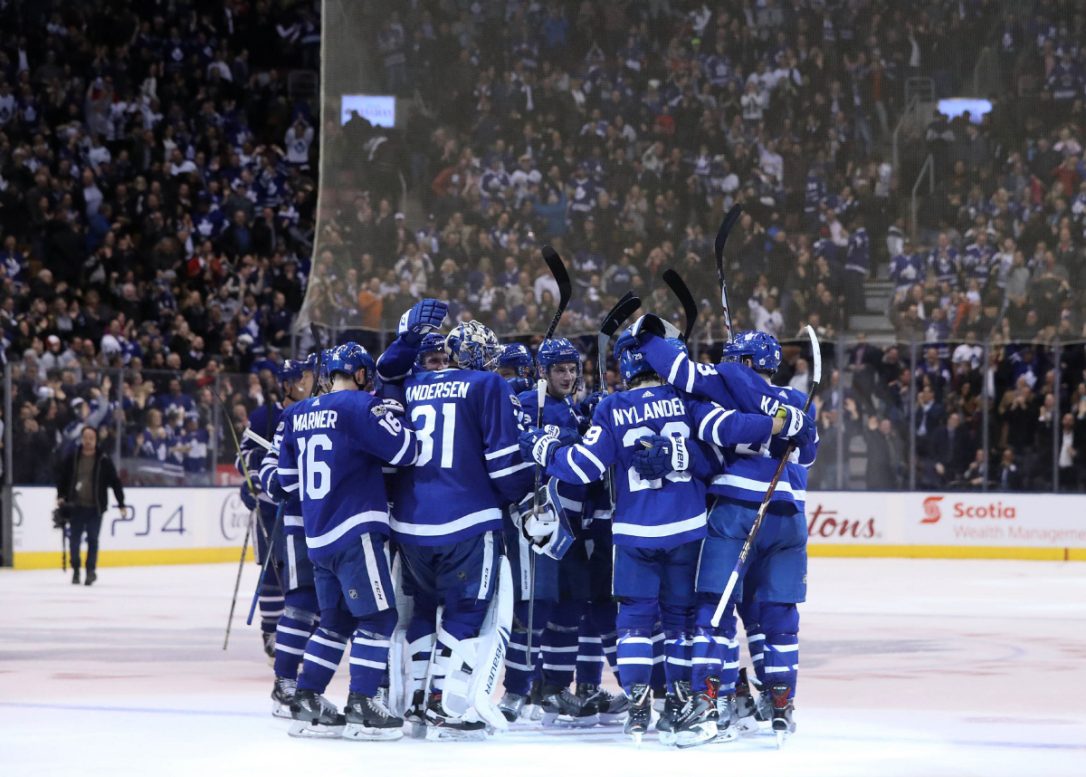 Leafs at Mid-Season: Checking In On the Boys

It’s been a while. More than a month, actually. I haven’t been in hiding. I haven’t been cut off from the world at large. I’ve just been busy. So, too, have the Leafs. At the time of my last article, the team held a 6-1-0 record. Since that time it’s been something of a roller coaster ride. One of those rickety wooden coasters whose days are probably numbered but is still good for a few thrills even if it means you’ll likely get whiplash. It’s been bumpy. At times, it’s felt outright disastrous. And yet the team finds itself 17-10-1 and sitting comfortably (or as comfortably as can be with two thirds of the season yet to be played) in a playoff position. The next few weeks could alter that comfort dramatically if Montreal and Boston continue at the rate they’ve been playing lately. My head says the Leafs will be fine, but my heart – which is still recovering from the 2013 playoffs – is more nervous than I care to admit.

There’s a ton to look back on, and a lot to look forward to, but I’m going to start by revisiting my observations two weeks into the season to track how the team has fared since then.

Auston Matthews has continued his Herculean efforts and remains as bright a spot in our lineup as ever. He missed a few games with injury, and didn’t look terribly healthy upon his return, but if his game against Vancouver on Saturday night is any indication, he’s back, and has plenty left in the tank. The Canucks game reunited us with a Matthews that dominates play, shows elite talent both offensively and defensively, is near impossible to shake off the puck, and despite not finding the back of the net has a penchant for creating dangerous scoring chances. We also saw the reunion of Matthews and Nylander and it was glorious.

Connor Brown has quieted down considerably. He was fighting for a roster spot to start the season, obviously unsatisfied with his demotion to the fourth line. He made his case known early that he belongs in the top 9, and has proven that beyond a reasonable doubt, but the past week has found Brown looking a little bit slower, a little bit clunkier, and his vision seems to have diminished a tad. Growing pains.

Morgan Reilly, Ron Hainsey, and Andreas Borgman still look really, really good. I hesitate to say great because the back end is still cringe-worthy at times. For whatever it’s worth the defense – though inconsistent – has looked much better in recent matches. The return of Roman Polak leaves much to be desired, and I’ll never understand matching your slowest defenseman against Connor McDavid, but Reilly has jumped back into a true top-pairing D-man after an off season last year, and the addition of Hainsey has helped steady Reilly’s game. He looks so comfortable jumping into rushes, pinching when he’s able, and his speed coming back to break up plays contributes to making him our most valuable defender.

Ron Hainsey is a penalty killing machine. He and teammate Nikita Zaitsev are the only two defenders league wide to have played 100+ minutes shorthanded this season, and Hainsey leads Zaitsev by about 21 minutes. Those stats don’t seem terribly sustainable, and if either Hainsey or Zaitsev sustain any long term injuries Babcock has done himself the disservice of relying too heavily on his first PK unit. It may be wise to begin giving Reilly and company some shorthanded ice time so they can find their penalty killing legs in the event that the team needs them to plug the hole a Hainsey absence would create.

Dominic Moore and Eric Fehr. Well, this resolved itself, didn’t it? Moore has actually looked great as of late. The fourth line has been contributing offensively and Moore and Matt Martin look to have found a second wind that’s found the latter on pace for a career year.

Patrick Marleau. I didn’t like the contract when we signed him. I still don’t like the third year. I absolutely love having Marleau on this team. Even just his willingness to fill in at centre as the roster around him struggles to find their game has spoken volumes of his leadership and importance to this group. The man is fast. And I know everyone said that when we signed him. And I heard them. And I watched tape of Marleau to try to comprehend what they were talking about. Only seeing him in action night after night has made me appreciate how much he still has to offer at an age where most players aren’t players anymore. I took him for granted going into the season and I regret that immensely.

The power play. Not quite as lethal as it was to start the year, but every time you give the Leafs a man advantage and the opportunity to set up offensively you create the potential for real magic to happen on the ice.

JvR-Bozak-Marner was terrible, was dismantled, and has recently been revived thanks to the solid play of James van Riemsdyk and Mitch Marner. Marner in particular has started to look like the Mitch we all fell in love with in 2016. His playmaking is exquisite, and while you can still see his frustration at not finding the back of the net, his creativity and confidence has started to build again and he’s been an absolute joy to watch. His first period against the Flames in Calgary was as dominant a performance as we’ve seen any Leaf give this year, with five shots and three quality chances in the first twenty minutes of play. Look for him to continue to rebound and for bounces to finally start going his way. Bozak continues to look increasingly expendable and will need to step up his play in the latter half of the season if he’s to become the coveted UFA I’m sure he’d love to be.

Uncle Leo has consistently been one of our worst players. Komarov’s decline in a contract year makes it more and more likely that his days with the Leafs are numbered (especially with so many young guns that could easily slot into his spot in the lineup). I’ve always appreciated Leo’s heart, but he’s been awful this season and maybe a fresh start with a new organization is what he needs, a la Daniel Winnik.

Calle Rosen is a Marlie and should probably stay a Marlie. Not every import from Europe is going to be a fit, and Rosen wasn’t.

Penalties. We still take way too many of them. It always feels like whenever the Leafs fight their way back in a game and just need to slow the game down to take it by the reins and win they gift the opposition with a chance to bounce back. Generally, this comes by way of taking a lazy penalty because we’ve been caught out of position or in a footrace that *cough* Polak *cough* won’t win. This team is strong at 5v5 and the more time we can spend on even strength the better.

Frederik Andersen for the Vezina. I know it’s not going to happen, but I can dream. Like last year he had a brutal October. Unlike last year he wasn’t coming back from injury and trying to find his game. Boy, has he bounced back in November, though. He’s been stellar, and is the reason the Leafs are sitting near the top of their division. If you see him on the street give him a hug. He’s earned it.

The Leafs beat Calgary at home this week in a stretch that saw them play only one game in six days before the upcoming back-to-back against Pittsburgh and Edmonton. Which, by the way, should be hyped far more than it has been for three simple reasons: 67, 97, and 34.