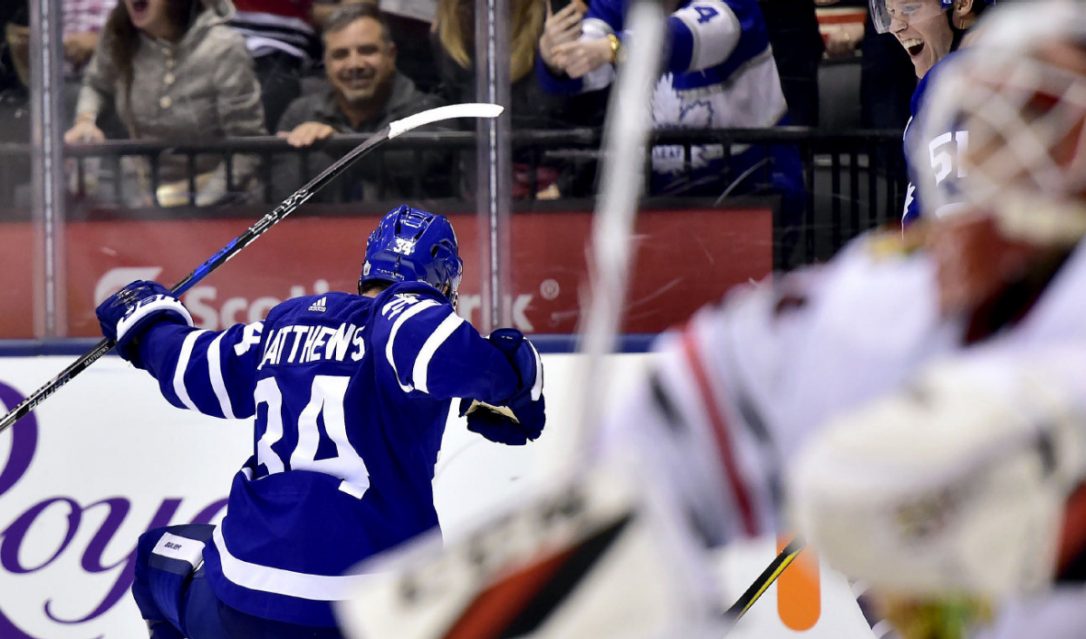 Settling In- The Ups & Downs of the Leafs Season So Far

Two weeks into the season, and the Toronto Maple Leafs are off to a start that hasn’t been uncanny for the team over the past several seasons. The last time the Leafs started with a 4-1-0 record in the first five games was the 2013-2014 season, where the Leafs finished nine points out of a playoff spot. But something is different about this young squad. If you’ve read, watched, spoken about, or absorbed through general osmosis the consensus on this team, built around young stars Auston Matthews, William Nylander, and (to a lesser extent) Mitch Marner, we can confidently say that this isn’t the same team that was consistent in terms of getting an early lead and squandering it over the course of sixty minutes. This is a more responsible, talented, speedy, talented, inspired, talented team. Right? Let’s look at the ups and downs of the season so far.

Auston Matthews is unbelievable. Seriously. I’m not sure many of us believed he could blow us away beyond what he managed in his rookie campaign, but two OT winners in one week – including a snipe to shut down the Blackhawks that was pure magic – had friends of mine weeping with joy. Literally. If there’s one thing that’s obvious when Matthews steps on the ice, it’s how much of a force he really is. The puck seems to just find him. He can create room when there isn’t any available to him. His release is “blink-and-you-miss-it”. He’s a definite mover and shaker, and he’s largely responsible for at least 4 of Toronto’s 8 points through five games.

Mike Babcock made it known that despite a fourth line slot, Connor Brown wouldn’t be relegated to fourth line minutes, and he’s absolutely shone as a sort of “seventh” top-six forward for the boys in blue. So much so that he’ll get an opportunity with Bozak and James van Riemsdyk when Toronto faces the Washington Capitals on Tuesday evening. Part of that shift is the poor play of the Bozak line, with Mitch Marner as a casualty of the move (more on that in a bit), but Brown has certainly earned the promotion, and I’ll be eager to see if taking the ice with more creative linemates will continue to boost his offence.

Morgan Reilly looks great. He had a luke warm season in 2016-2017, but he’s rebounded, and is shining as the team’s number three defenceman. Add to that the support of Ron Hainsey, who looked a little rocky out of the gates but has quickly settled into Toronto’s system and proven that he can skate, defend, and supplement the Leafs’ young blue line, and suddenly Lamoriello’s offseason looks like it’s packed a bigger punch than expected. Andreas Borgman is also a good fit on the back end, though his speed leaves something to be desired. Think of him as a young, more agile Roman Polak. The Roman Polak who started to blossom late last season as a reliable stay-at-home who could actually spark some offence with the puck in the offensive zone.

Dominic Moore and Eric Fehr have some healthy competition going, and though Moore has won the battle of advanced stats (and has two goals to show for it, compared to 0 points for Fehr) the eye test has them at a bit of an even keel. I would love for this tandem to continue to roll through the season. Providing some healthy internal competition means both players see about 40 games of work, but they’ll also continue to try to edge out their competition, both within the roster and on the opposing team. I’ll even throw a small, *small* nod of the head to Matt Martin, who is still underwhelming when you consider that he’s stealing a spot from Kapanen or Leivo, but is making a contribution on the ice. He knows his role, and I’m glad it’s not just to fight anymore. That breakaway chance, though. Makes you wonder what any other player might have made of that opportunity.

Patrick Marleau. I was wrong about this, everyone. I hated the deal when it was signed. He’s been a really nice presence on the ice. And boy, can he skate still.

The fans. The ACC has a penchant for being a bit of a bore. The lower bowl is mostly filled with suits who are so busy schmoozing in their private suites that they often aren’t seated by puck drop. Those seats are crazy expensive, and anyone with enough cash to grab some also has enough money to not care if they’re missing part of the action. This new era of Toronto hockey has changed that. Watch a home game this season. Even late last year. By the end of the anthems the arena is packed. No one wants to miss a second of the thrill. Did I mention they’re loud, as well? Because they are. It’s never been disputed that this city loves hockey, and that they love their hockey team. A decade of poor play only started to see dwindling crowd sizes at the very end of the spiral. Even then, most games sold out. But there’s new energy in the air, and it’s crazy exciting to watch.

The city. Toronto is electric right now, which is good because the Blue Jays were outright bad and the Raptors look as though they’re headed for another season where they’re good, but not good enough to challenge in the ridiculously tilted NBA. The TFC are shining, and the Leafs look poised to continue to make noise as the season progresses.

JvR-Bozak-Marner. They were weak defensively last year, and one a squad that isn’t vastly improved but more responsible on the backcheck than it was a year ago, they need to tighten up in their own end to contribute to the team’s success. Mitch Marner saw a demotion to the fourth line at Monday’s practice, and stayed there during the morning skate on Tuesday. Time will tell whether Babcock is only looking to scare the young winger for a game or two, or if this move will have any staying power. Moving Brown into Marner’s spot with JvR and Bozak won’t diminish that line’s offence, but will certainly bolster their defence. Babcock also made it clear that Marner isn’t the only one at fault, citing that the “tie goes to the veteran.” He drew the short straw due to his short tenure in the league, but look for Marner to lead the charge in fixing the Bozak lines’ defensive lapses.

Uncle Leo. He’s starting to show his age. I pondered to a friend the other night that I wonder whether he’s struggling with the fact that he’s now unquestionably a bottom-six forward after having experienced making the All Star game and being a big contributor during the scorched-Earth days. He still has time to turn it around, but the team needs more out of him, and his chemistry with Kadri (those two love to yell at each other) to take some of the burden off Matthews.

Calle Rosen. To be fair, and to give Rosen every benefit of the doubt, he’s made a gigantic leap into an NHL role that he probably wasn’t ready for. He’s looked a little like a deer caught in headlights at times, and I wonder whether he’s at all overwhelmed by what’s happening around him when he’s on the ice. That said he’s made some questionable choices, needs to be better with his positioning, and needs to make smarter passes when he gets the puck. He feels almost like watching a younger, riskier Gardiner without the offensive upside. But he’s fast, and he provides depth the team didn’t have before. Poor Connor Carrick is teetering on the edge of being the team’s seventh defenseman, but Rosen’s lacklustre play has re-opened a door for Carrick to grab a spot on the third pairing.

Penalties. Simply put, this team needs to be more disciplined. We’ve been getting into a ton of trouble with the new zero-tolerance slashing, but even so, this team needs to stay out of the box. They’re an offensive dynamo, but that offense can’t operate if they’re constantly playing a man down and in their own end. Penalties have been a problem for most teams with the referees blowing the whistle more frequently, but the Leafs need to be better if they want to suppress opposition scoring chances.

Frederik Andersen isn’t really a low. In fact, I think he’s looked quite good. There have been some blunders, and a few goals that he absolutely should have had, but for the most part goals against him have been at the expense of poor defense rather than poor goaltending. That said, it was Freddy stealing us games that got us into the playoffs last season, and he’ll need to do the same as the season rolls along if the team is to make a repeat post-season experience. The team can make this a lot easier on Andersen if they smarten up defensively. He’s looked healthy, dialed in, and ready so far, but he can be better. We’ve seen him be better.

The expectations. Don’t take this the wrong way. Really. I’m fully on board for planning the parade early. That’s what sports are about – buying into the drama and the mystique and the tradition and getting way too hyped about a trophy that really means very little in your life but in the moment feels like it means the world. However. Let’s keep in mind that this is still a young team full of sophomore players that are still finding their game and figuring out how to muscle through an eighty-two game season without dying. They will get better. Their defence will improve. Hopefully, their offence will as well (can you imagine?). I think the pressures and expectations the fan base has been building are great things, but it’s early in the season. Heck, it’s early in the *knock on wood* dynasty, so let’s just sit back and enjoy the ride.