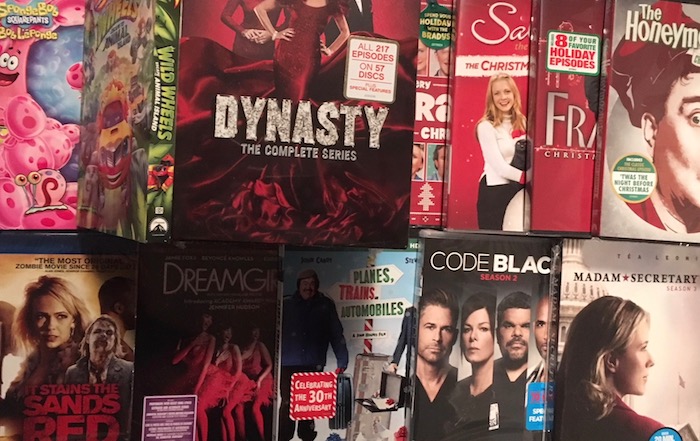 It’s time, once again, for the On DVD series featuring new releases from Paramount Home Distribution (with a bonus new release from Dark Sky Films).

A new thriller, a classic comedy, and an Oscar-bait hit from recent history mark the fall 2017 movie offerings. Dark Sky Films’ It Stains the Sands Red is a brutal zombie horror about the terror of persistence. Meanwhile, Dreamgirls has never looked better than it does on its new Blu-ray from Paramount with killer special features and history’s 20/20 perspective on Oscar winner Jennifer Hudson and Queen of the World Beyoncé Knowles. There’s also Planes, Trains and Automobiles celebrating its 30th anniversary with a new Blu-ray release, starring John Candy and Steve Martin. If you don’t have it already, you should obviously buy it right now.

Code Black‘s decent but unmemorable second season is the least interesting TV series on offer this month, totally in the shadow of the sparkling complete series box set of Dynasty, a franchise that’s just been rekindled on the CW this fall. We also got the season three release of Madam Secretary, a serviceable political drama that hurts so bad now because of how much it stings of Hillary heartbreak.

The fall’s new material for kids includes another Blaze and the Monster Machines adventure, this time it’s “Wild Wheels: Escape to Animal Island” featuring 4 episodes of crazy island adventures starring animal-vehicle hybrids! There’s also the complete 9th season of SpongeBob SquarePants in case you’re not tired of him yet.

Paramount is also releasing a bunch of classic TV on DVD this fall in time for the Christmas season, including compilations of the great holiday-themed episodes of The Honeymooners, Frasier and Sabrina the Teenage Witch, plus the quirky Brady Bunch reunion movie A Very Brady Christmas. Classic TV makes the perfect background feature at a holiday party so these special releases are a great find.