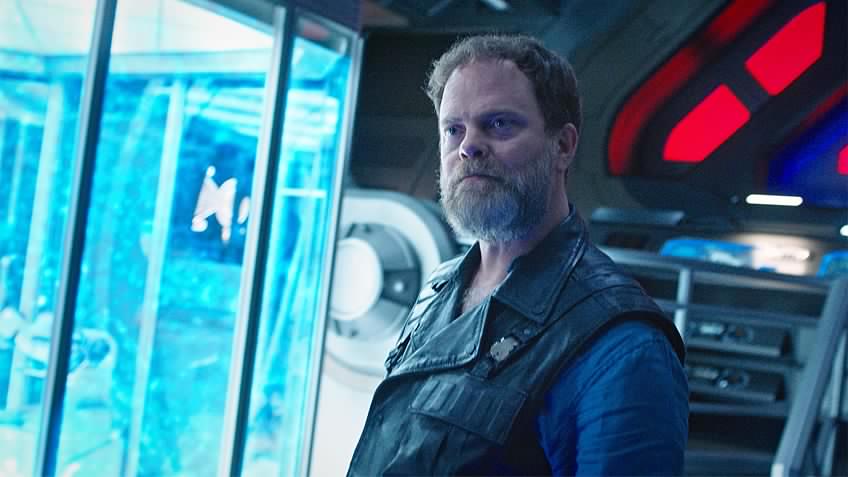 Let’s Do The Timewarp Again

Some of Star Trek’s greatest stories have taken place in a timeloop (you can kill the cast and blow up the ship SO MANY TIMES) and Magic to Make the Sanest Man Go Mad is no exception: we get lots of dramatic deaths, ‘this could only happen in the timewarp’ romantic actions, some fun character moments, and the best example yet of the crew working together as one to solve a problem with all their combined wit and ability (feeling the most like a classic Trek of any episode to-date). There’s still plenty of weirdness (Harry Mudd’s helmet…?), space whales, and a disco party on the Disco, and it all amounts to a fun, engaging episode that proves Discovery is capable of great one-offs as well as serialized stories.

Romance is in the Air

Discovery, being a shorter season than traditional 22 episode Trek seasons, occasionally needs to speed up certain events or relationships in order to make them work (Ash Tyler’s immediate welcome and position aboard the ship, etc), but the show makes great use of the timeloop to rapidly advance Burnham and Tyler’s relationship via the time-displaced Stamets. Keeping Stamets out of the timeloop due to his interfacing with the spores is a handy device (there’s always gotta be one person who knows it’s looping – Bill Murray in Groundhog Day, Emily Blunt in Edge of Tomorrow, etc) and allows the growth that occurs in each loop to actually affect the world moving forward. Usually the progress made during time loops or alternate timelines is wiped away (though usually leaving a key item or memory behind), but having Stamets on-hand to fill everyone in allows us to keep the broad-strokes and advance the Burnler (Tynham?) romance in a condensed timeframe.

Now, if the predictions of Tyler’s true intentions we’ve discussed here in posts-past prove true, this super-condensed-timeframe relationship actually makes a lot of sense: if Tyler is a double agent, this highly-specific , high-pressure situation allows us to reasonably believe he and Burnham have grown much closer without having to question how long he can hold up the facade. If that’s the way we’re going, it’s a clever bit of business. With the mid-season break approaching, I suspect we’ll know sooner rather than later.

Anthony Rapp is getting to flex his charming-wacky-guy muscles a bit as Stamets is experiencing heightened euphoria after interfacing with the spores. I’ll miss the snark, if indeed it is gone forever, but in the interim it’s a fun take. He also now has an implant that lets him interface without getting impaled, which is nice. I was having a hard time believing they’d just keep letting that happen every time they needed to jump.

Still no word on the Mirror-verse Stamets, but stay tuned.

So, Rainn Wilson promised us a more bloodthirsty Harry Mudd and boy did he deliver. Mudd’s revenge on Lorca involved a fun montage of him killing the captain repeatedly (though I wish there had been more variety like the teleporter kill than the over-used disintegration), and watching him conduct the teleporters like a symphony was a blast. It sits somewhat oddly with the silly tone of the original character, who was seen more as a nuisance than a threat, and easily ranks as one of the bigger ‘grimdark’ takes on a character the show has delivered…and yet…Mudd was SELLING WOMEN when we first met him (women he’d given a drug to make more beautiful, no less…ugh). The danger, and I found myself guilty of this while watching, is in taking this Mudd’s violent actions as at odds with his character – they aren’t- rather than at odds with the tone of his original episodes. If you’d told me that Harry-fucking-Mudd was going to be the Khan to Isaacs’ Lorca, I would have laughed you out of the room, but it works surprisingly well; Lorca is a dour, driven man and it’s fun seeing his arch enemy (until the Klingons come back around…) be someone who has fun. He is also defeated in a classic sting, which is delightfully appropriate, right down to the Agatha Christie-style full cast explanation of ‘how we conned you’. I don’t know that we’ll see Mudd again this season (great tying him back to his constantly estranged wife), but even if we don’t, this has been a great use of a classic character.

I’ll never stop loving that this show refers to wacky space phenomenon in the vaguely exhausted way that my nerd friends and I do.

“Wait, what thing?”
“Oh, you know that space whale thing from that one episode?
“Right! The space whale!”

Having Saru desparately trying to give the science-y version is a joy. More of this forever, please.