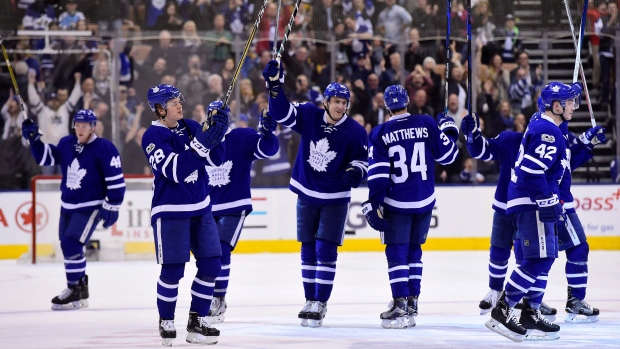 When Kelly first asked me if I wanted to write for My Entertainment World, my first response was, “You know I have no qualifications or experience whatsoever, right?” but then I thought about all the passionate rants and gut-wrenching, trying-not-to-cry-and-then-crying, brooding-in-the-dark moments I’ve had as a life long Leafs’ fan. I spend most of my working hours talking to fellow blogger Andrew Markowiak about the Leafs anyway, so why not do it in front of the internet?

Providing I’m allowed to continue contributing to this website after what I’m sure is about to be a frenetic, vulgar diatribe, I eventually plan to write with more structure. But, for now, I’ll just introduce myself with a bunch of different thoughts in list form ‘cause that’s what Elliotte Friedman does:

1. March 26, 1994 was my first game at The Gardens. Leafs vs. Nordiques. About 30 seconds in, a Leaf crushed a Nordique against the boards. I could hear the hit all the way up in the nose-bleeds and then the whole place went ape-shit. That was the moment I became a true fanatic.

2. May 13, 2013 was the worst moment of my whole life. I’ve lost family members, pets, and friends. I’ve endured personal and professional failures like you wouldn’t believe. Nothing, NOTHING rocked me to my core like that one damn day. Maybe a bit hyperbolic, but still: fuck Boston.

3. I went on a road trip with some friends to Montreal to watch a Habs’ game specifically with the plan to switch allegiances. I ate a lot of poutine, smoked a nice cigar, bought beer at a gas station; all the great things you do in Montreal. The Canadiens even won the game. This all happened a season after waffle-gate, jersey-gate, and salute-gate. It was tough times and I was feeling abused and ready to move on.

4. Local boy and Michael Power/St. Joe’s graduate Brendan Shanahan introduces the Shanaplan and I feel the way I always feel whenever someone from MLSE says they’re sorry for all the shit they put us through and this time they promise they’ll do better. I believed them again, agreed to get back together again, told my friends and family things would be different this time…

5. Then something crazy happened…

Albatross contracts went out, prospects came in, Lou and Babs came in, and they said we were gonna lose, they said it was gonna hurt, and it did but not in the way I was used to. There was a point to it, a plan. I finally understood what John Mellencamp was talking about. The Shanaplan hurt, but it hurt so good.

6. I believe it was Ludacris who best described the expectations for the Leafs 16/17 season, “Too many rookies, not enough pros.”

But it was SVDVM who said, “Hit ‘em with the four like Auston Matthews.” I went nuts, Andrew Markowiak went nuts, our British immigrant friend/colleague Brad, who didn’t know anything about hockey, lost his shit too!

8. I don’t know what this coming season is going to be but, if it’s anything like last year, we’re going to have a lot of fun watching a team worth “beleafing” in!

Thanks for reading this far. 62 days to go!