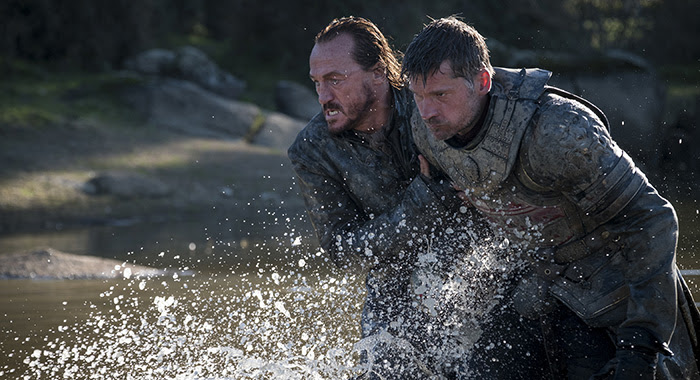 Game of Thrones: “Eastwatch” Me, Watch Me

It’s hard for me to say, but this season of Game of Thrones is shaping up to be a vast improvement over its last two predecessors. Season five saw an end to some of the richer political interactions in King’s Landing, and encounters with the wildlings were, while interesting, sporadic and less gleeful. Season six was a mess of deaths, poorly shot battle sequences and increasingly poor scripts for Peter Dinklage. Season seven appears to be aiming for what made seasons one through four so damned fun – dynamic and fluid political structures, interesting groups of principal characters with strong supporting characters to back them up, and more or less well-defined quests.

Well, except for Jon’s bizarre A-Team squad of aging heroes ranging north of The Wall to capture a dead man and show him off to two queens at their armistice meeting. That’s not really a good quest at all.

But Sam’s quest is strong, it’s clear, and it’s finally headed back toward Castle Black. Yes, armed with knowledge, the skills to cure stoneskin and a few pilfered books from the forbidden part of the Citadel library, Sam is hellbent on helping his brothers. So much so that he mansplained away a massive reveal from Gilly, who’s own adventure has become education. Never mind that Rhaegar may have legitimately been wed to Lyanna Stark and thus produced a legitimate Targareyn heir in Jon Snow, which, as terrible as that is for Elia Martell, it carries a lot more impact in this season. But, as Sam said, he’s tired of reading about the achievements of better men.

So we press onward! Dany’s burning alt-right-esque figures and her reunion with Jorah Mormont is cute, for sure. But let’s stick to her burning people for now, because as I’ve said, we’re looking at what’s making this season so interesting. HBO is obsessed with drawing parallels to earlier moments, referencing them in that slightly obnoxious way that a fanboy will do at a gathering.

“Did you see it? When he makes that guy his bitch on Oz? Huh? But he was his bitch last season? Didja? Do you see that it’s pointing out such and such clever point and masculinity is its own end?”

And it’s not just the image that creates the parallel – just to be sure the audience is getting the point, Varys steps in to remind us that he has ethics and we should too. Everyone has to constantly compare Daenerys to her father, despite the fact that she has more in common with Aegon the Conqueror than Aerys the Mad King. It becomes this very weird “but her emails” parody that also shackles itself to the lore of Westeros. But that’s what creates interest, the strange balance the show strikes between topicality and esoterics.

Speaking of politics, I mentioned last article that the political landscape of Winterfell wasn’t as dynamic and trigger-happy as King’s Landing used to be. Well, “Eastwatch” tried to prove me wrong, as we watch Arya confronting Sansa, spying on Littlefinger, and hijinks ensuing with a secret scroll. The problem is, watching Littlefinger go about the business of being Littlefinger isn’t actually as interesting as watching him interact. We know he’s a creepy uncle figure. We know he’s a master manipulator. It’s very clear that he’s building toward some endgame that’s been cooking for several seasons, but he was doing the same stuff in season one and he still had people to talk to, people that weren’t as damned boring as Maester Wolkan (sorry, Richard Roycroft).

Plus, in King’s Landing we weren’t limited to just one person’s view. Littlefinger, Tyrion, Tywin, Cersei, Varys, Bronn, Sansa, Ned Stark…there was a huge breadth of people for the camera to follow, a great big list of characters from whom to choose. Since Bran isn’t doing anything even remotely politically interesting (YET?), we’re stuck with Arya and Sansa, great characters in their own right, but are made greater by those who they interact with. It’s why Arya’s sparring match with Brienne last week was so good – everyone we cared about in Winterfell was there to see it. And it provoked so many questions: was Brienne holding back? Did Sansa feel threatened? Did the Braavosi-descended Petyr Baelish recognize the origins of Arya’s skillset? Sadly, the questions that “Eastwatch” asks us are: will a letter be enough to make Arya act? Will Sansa take the plunge and stage a Northern coup? Will the spy vs. spy game Littlefinger plays be enough? These questions, valid and important as they are, make me sad, because they are all around the central theme of, ‘will it be enough,’ when the truth is that the show, the grand play of the silver screen, should always be enough. And it makes me sad when we have questions about the plot itself being enough.