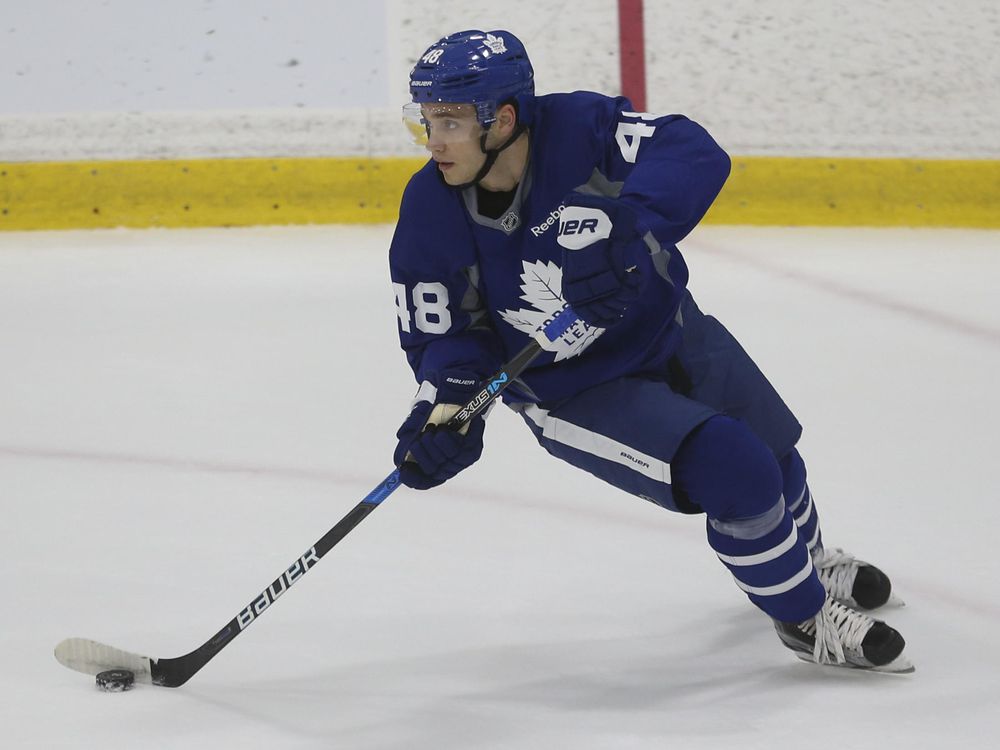 Lou Lamoriello and the Toronto Maple Leafs have made it very clear that they’re ready to compete. While the word out of MLSE is that the Shanaplan is still in full swing, it’s become apparent that the development of this roster has thundered past expectations and the team is looking to enter an era of “win-now” management. The tight-lipped GM has added a veteran presence to the Leafs’ fountain of youth, has added depth to the Buds’ blue line, and is preparing for the contract extensions of the team’s core trio, but has he adequately addressed the issues that are holding the team back from making a deep run year after year? Let’s take a quick look back at the signings that have happened so far this summer:

Look for Grundström to develop into a younger, more skilled Leo Komarov that can add some grit to the blue and white. We know how much Babcock loves grit. He’s been touted as a strong playmaker, and despite his need to improve his skating and mobility, has a canon of a shot that could contribute to a string of 15-20 goal seasons once he’s made the jump to the NHL.

Smith signed a one year extension almost exclusively so that the Leafs could fulfill the exposure requirements for the expansion draft. Expect to see him in limbo this year as an extra skater on the NHL squad.

This is the most term that we’ve seen Lamoriello give to a player during his tenure in the front office here, but it perhaps speaks more to the organization’s lack of right handed defensive depth than it does of Zaitsev’s ability. He’s a very solid second pairing rearguard, and more favourable matchups on the ice could see some of his underlying numbers improve throughout his sophomore NHL season.

The team still has some time left to adjust the back end, but the big players in free agency have been claimed by other organizations, and the only realistic way a seismic shift happens to introduce a top-pairing D-man is via trade. If a trade doesn’t materialize, look for Zaitsev to play a significant role as a top-3 defender as he did last season. He will very likely see a good deal of ice-time against the league’s top players, and the Leafs will want him to continue to grow his game and become more accustomed to the North American style of play.

More fresh faces from Europe that Lamoriello and Shanahan are hoping will bolster the back end. Borgman and Rosen will suit up for the Marlies, filling the void left by the departing Andrew Campbell , Steve Oleksy, and potentially Travis Dermott should he steal a roster spot in the NHL.

Borgman was ranked 36th amongst European skaters in his draft year, but all thirty teams passed over him. At twenty one years old, he has good mobility, a good shot, and came away from last season with SHL Rookie of the Year honours.

Rosen is a fast skater with good vision and has drawn comparisons to Nik Lidstrom in terms of his style of play. There’s some concern over whether Rosen will be able to excel at the physical matchups he would face playing in the NHL, but his speed makes up for his lack of physical presence. Those that have observed his game in Sweden think he could develop into a top-four defender on an NHL squad. Rosen is an intriguing fit – despite his left shot, he’s comfortable playing the right side, which makes him an invaluable commodity to this organization.

Though it seems likely that both players have strong potential to be impact players in the NHL down the road, these will be depth signings for the coming season, and while both have a legitimate opportunity to crack the NHL roster through training camp, it’s more likely that they are a few years away from competing for a permanent spot on the Leafs’ blue line.

Brooks really impressed at development camp this July, and will be an impact player for the Marlies next season. Alongside Jeremy Bracco, he will be called to step up and contribute offensively in the absence of Leipsic, and potentially Kapanen, should he be playing at the ACC rather than Ricoh.

The organization knows exactly what it’s getting with Sparks – a reliable AHL starter that missed the end of last season due to injury, but has made strides in his game and has proven that he can step in as a backup to Curtis McElhinney should Frederik Andersen go down with another concussion. Two years at a reasonable rate, Sparks proved to be more consistent that Antoine Bibeau, and will be an important presence in net at Ricoh Coliseum through 2019.

Was it McElhinney’s season clinching save on Sidney Crosby that earned Toronto a playoff berth last April is the reason for this extension? It’s not a horrendous contract, and given the impending cap constraints in the next few years, the Leafs have managed the crease extremely well from a financial perspective. The real question here is whether Andersen is able to consistently provide 60+ game efforts, and whether McElhinney can reliably backstop the team when called upon. Look at the Penguin’s triumph this season, and recount the fact that Phil Kessel would not have lifted his second Stanley Cup if Marc-Andre Fleury wasn’t backing up Matt Murray. Granted, not every team can have a natural starter as their backup, but it sure does help inspire confidence when you know your plan B can still steal you a game night after night.

Moore is something of a conundrum, in that he’s an obvious downgrade from Brian Boyle, but a (seemingly) obvious upgrade from Eric Fehr and Ben Smith. Dylan Fremlin of TheLeafsNation penned an analysis of Moore’s game compared to the other potential 4Cs in the current system, and his underlying numbers hint that he probably isn’t much of an upgrade from either Fehr or Smith. That being said, the Leafs are bound to miss more man games due to injury this year than last, and having some depth, especially at centre, is never a bad thing. At one year, for one million dollars, this addition isn’t very inspired, but it also isn’t crippling.

Three more additions to the Marlies that will likely spend the duration of their contracts in the AHL.

Really the only move Lou made this summer to immediately impact the Leafs’ defence, Hainsey has been a polarizing figure amongst Leaf fans. He’s nearing 40, is a temporary fixture, and is not the top-tier talent the defence corps need to make this team a perennial contender. Luckily, landing Liljegren in the draft makes this deal much more sensible – the young talent is confident he can compete for a roster spot within two years. All that aside, Hainsey took on an elevated role with the Penguins last season with Kris Letang sidelined. Hainsey played top-pairing minutes and contributed heavily – though Crosby, Malkin, Fleury, and Martin probably had something to do with it – to the success of Pittsburgh’s post season.

His value with this D-core will be providing leadership, a veteran presence, and a stay-at-home style that should compliment Gardiner’s risk taking and creativity. At two years, this deal is the literal embodiment of “better than nothing.”

Are Leafs fans lucky to see Marleau suit up for their team to cap off an impressive career? Absolutely. Does his signing coincide with the Shanaplan’s modus operandi that the team will build itself through drafting, development, and patience, rather than targeting high-profile players that can make an immediate splash both on and off the ice? Not so much. To top it all off, there’s the much talked about final year of the contract that could make extending Matthews and Marner trickier than it needed to be.

The front office has talked a lot about Marleau’s ability to skate, even at his age, and he has obviously proven himself to be an elite offensive talent, but Lamoriello is gambling on a player that is at the point in his career where it’s common to see skill retention decline. Every year, the game is getting younger and faster, and the Leafs just got a little bit older, and though Marleau hasn’t noticeably slowed down yet his final season is still a long way off.

Conversly, Marleau contributed 27 goals and 46 points to the Sharks last year, and if he can remain consistent in those numbers, he will be a welcome addition to Toronto’s top six. He is also in the midst of an eight year iron-man streak, and if he can continue to be healthy, he will contribute to making the Leafs’ offence more lethal than it already was.

Holl had a strong finish to the season last year, and elevated his game in the playoffs. While his odds of making the Leafs are slim, this looks to be a bridge deal before he’s eligible for arbitration next summer. Whether he finds a home in Toronto’s system or is shopped in a package to bring in an impact D-man remains to be seen, but he’ll play a large role on the Marlie’s back end this October.

The price is an absolute steal for a first line winger, and it could prove to be if he remains on Matthews’ wing, but the deal is reflective of Hyman being better suited to a bottom six role. He works incredibly hard, and it’s that work ethic that Babcock absolutely adores, but Hyman lacks the natural skill and poise that distance him from Matthews, Marner, Nylander, and even Connor Brown. In some ways, it feels as though Hyman’s presence is stealing an opportunity from Kasperi Kapanen to shine on the big stage, but Hyman could develop into a power forward type that the team will need after the departure of James van Riemsdyk next summer. He doesn’t have the hands of JvR, or the playmaking or scoring abilities of an elite offensive player, but he has heart, and will do everything in his power to help his team win games.

Somehow, drafting Liljegren was more satisfying than when the Leafs announced they had picked William Nylander or Mitch Marner. Liljegren was a projected top-five pick that had a disappointing season after a bout of mono, and he looks to be an absolute steal at 17th overall. His skating, his hands, his vision, and his creativity have many fans hopeful that he can develop into a true franchise defenceman, and early (possibly overzealous) comparisons are drawing lines between his game and Erik Karlsson’s. His signing makes it all the more likely that he’ll dress for the Marlies rather than return to Sweden.

Are the Leafs a better team today than they were on April 23rd when the Capitals eliminated them from the playoffs? Our next Offseason Update will argue the case for, and against, Lou’s decisions and where the Leafs stand heading into next season.