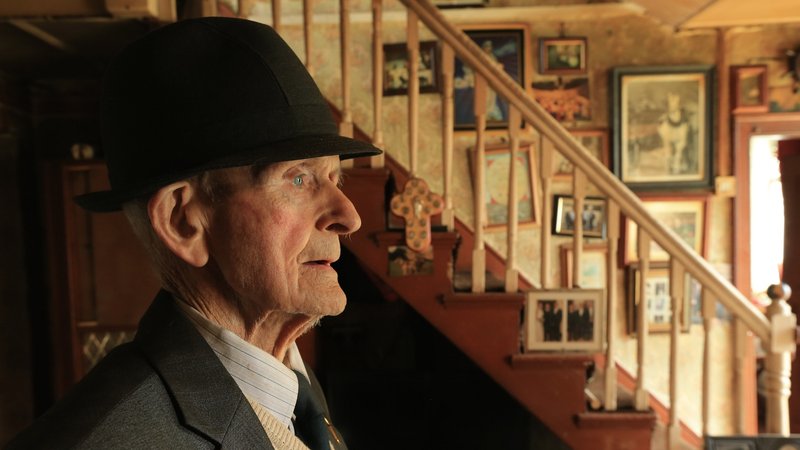 This year marks the first year of the Syracuse Contemporary Irish Film Festival, and closing out the festival is a charming and moving film by Alex Fegan called, Older than Ireland. In 2016, Ireland celebrated their 100th anniversary of the 1916 Easter Rising, which led to Irish independence from Great Britain. To commemorate the occasion, Fegan interviewed 30 centenarians, which are people 100 years of age or older, about their lives as Irish citizens. Many recalled the events during and after the civil war, but the film acts as a personal essay celebrating the subject’s journey through life. I had the pleasure of interviewing Alex about the film and these remarkable subjects.

Where did the idea of this film stem from and how did you find the subjects within the film?

Alex Fegan (AF): Ireland celebrated its centenary of it’s big revolution in 2016. In 1916 Ireland had a big war called the 1916 Rising and that led to independence of Ireland from Britain. Rather than making a film that was political per sea, we still wanted to mark that occasion by looking at all people that were born before 1916. We contacted one [centenarian], and [the interview] turned out to be so good we said, “Oh this could actually work!” We approached the Irish Film Board, a government body in Ireland, who support independent filmmakers and we pitched the idea to them. Luckily they got behind it. Then finding the people, we put ads in newspapers, mainly to try to reach out to people who were turning 100 or who were much older. Ultimately what we found was, that didn’t actually yield that many results. It was once we started finding centenarian’s who knew all other centenarian’s in the next parish that we were able to go from one parish to the next.

How did they feel about being included in this film?

AF: It was very positive across the board, especially from the families and from the centenarian’s themselves. We’d often arrive into houses and think, “Oh God, these centenarian’s they might not be able to talk for so long or the families might be concerned that they’re being put under pressure.” But once the tea started to flow, it was actually harder to leave the house. They really enjoyed the process of telling their life stories. When the film premiered [in Ireland] quite a few centenarian’s came along. They all came up to the stage [to do] a Q&A, and they really enjoyed it. One lady had never even heard of Facebook before, but after the film came out she would [follow] how many likes the, Older Than Ireland page had. They all really got behind it.

The subjects were very coherent on their past, did that surprise you at all starting out on this journey?

AF: Yes very much. I’d never met one centenarian before making this film. When I first heard about a centenarian I [said], “Over 100! Are they bed bound?” It was nice to destroy that stereotype [in the film]. When you ask a lot about their childhood years they face lights up and they remember every little detail, but if you ask them what they did that morning they might [not] remember. We interview 30 centenarian’s out of 300 in the country. The ones that we were recommended that we go talk to were obviously compos mentis. They all proved that way they were all good good talkers.

At what point did you connect with the oldest living Irish born woman who now lives in Syracuse?

AF: We actually googled who’s the oldest Irish citizen alive at the moment and Kathleen Snavely popped up. [Our] previous documentary, The Irish Pub [played] in Syracuse [in 2014] and Micha Crook, very kindly hosted us for that screening. I contacted Micha and said, “I heard that the oldest Irish citizen [lives in Syracuse and], she hadn’t done any kind of interviews, so I didn’t know what she was like.” Micha said, “Well look I’ll call in and see if I get [her] talking.” Over a period of six months Micha became really good friends with Kathleen, so I said, “My understanding is that she’s about to turn 113,” and Micha said, “Why don’t you come over and see if you could come for her birthday?” We booked a flight and flew over [and] interviewed her the day after her 113th birthday. Initially she didn’t want to be known for being the oldest living Irish citizen, but when we got talking to her she realized this could be a nice way to explain my story. We’re extremely grateful to have captioned her [before she passed away].

What are some of the challenges of a ‘Talking-head’ style documentary?

AF: The big challenge was how to come up with the story arc for the film. Initially what we were going to do was to go through the decades [and] ask the the centenarians to reflect on each decade, [but] we actually found this quite boring. We obviously did [focus] a bit with the Irish history and especially around the civil war. We figured out that the arc would mirror the arc of life [starting] with their first pairs of shoes, then go into their school days and progress to their wedding day. It became a love story then it concluding with their reflections of the afterlife.

Why did you include the architecture of the homes and their living spaces into the film?

AF: I suppose with ‘talking head’ documentaries, somebody’s house can reveal just as much about their character as their clothes, [or] their facial expressions. The key was to allow the audience to look at their homes while their talking, so you get an extra sense what these characters are about. Obviously when you are interviewing people over 100 they’re not going to be moving too much, so let’s see how we can add to that dynamic.

Lately I’ve noticed documentaries running times have gotten shorter, down to 75 minutes. Why is that?

AF: It would probably be a preferred length for exhibitors, because they can show the film more times. That length can be a sweet spot [since] it’s not a drama, it doesn’t have a traditional story arc to hook people in. That length works for documentaries, because the audiences walk out wanting more. Our initial cut was over two hours. We were trying to condense three thousand years of life between 30 by 100 into 75 minutes. There were so many incredible stories which we had to cut out. The hope was that people would want more and then talk about it more positively.

What do you want a younger generation to take away from this film?

AF: I think it’s important that people appreciate their elders, not just the key shape of their wisdom, but because of their living history. It’s not a grander sense of history, but it’s a social history. When you talk to these people and you realize how unpretentious and natural they are. They’re the same as everybody else and age is just a number. I think that we can stigmatize different people in society and by listening to them that we can get a greater understanding of them and ourselves.

There was a lovely segment in the film where all the subjects talked about dreaming of their loved one’s that had passed away. Did you plan those questions beforehand?

AF: We’d ask the centenarian’s about their thoughts on their loved ones and the parting of their loved ones and one or two said it. Then it became something that we would ask, oh did you ever dream about them? It turns out they all did. [It’s] such a curiosity, what [is] it like to have lived with somebody for 70 years perhaps and then for them to be gone? I think some of the more poignant [moments in] the film naturally came out of that question. Obviously some people said, “Oh I don’t think I really loved my husband,” or “I don’t think I really think about him.” But then there were others who you got that sense of they really experienced true love. Like that one gentleman, Jim Barry who said, “You know when she died, I died.” He was totally heartbroken and you have to be moved by that.

Older than Ireland plays at the Syracuse Contemporary Irish Film Festival Saturday June 24th at 7 pm, at the Everson Museum – 401 Harrison St tickets are only $10. For more information about booking please visit: https://syririshfilmfest.com/take-action/