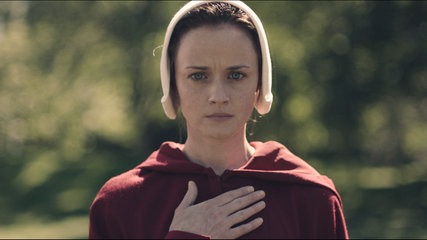 This was the first episode of The Handmaid’s Tale that throughout felt like… a TV show. A really good TV show, mind, but a show that relies on the normal mechanisms of plot and awe to carry viewers from one week to the next.

Which isn’t all bad. If every week was like “Late,” I’m not sure I’d be able to breath any more. So I cant complain too much for a chance to watch Offred/June start to tear apart her own barriers and have satisfying sex.

Another first? This week the flashbacks to the pre-Handmaids world aren’t used just as terrifying reminders of how close all this is. Instead, they show us the beginnings of June and Luke, and how that earned her the dreaded “adulterer” label. They also serve as an epic contrast to June’s monthly sexual assault, which will become all the more profound in the closing minutes of the episode.

“Faithful” features a series of rebellions more profound than any we’ve seen so far, none the less so for the range of their impact. A stolen car and a stolen glance. The tiny ways, and the huge, that the women of The Handmaid’s Tale are unable to continue to blindly submit.

“Faithful” also explores the meaning of faith – both for the people who have bought into the current system, like Serena Joy and the Commander, and for people just outside it, like June and Emily (Alexis Bledel). It’s about the limits of Faith, as we see when Serena Joy pressures Offred and Nick to have sex for the promise of a baby. And we also see the strength of Faith, as it powers Emily’s momentary victory over the men who control her absolutely, right down to her anatomy. And we see the value of Faith for June herself, who holds onto the religion of love and the story of her own existence to see her through this dystopia.

The structures that Offred has put in place to keep herself alive are crumbling. In the first four episodes, she spoke in clipped, careful dialogue. It felt like words ripped out of a medieval knight story, or more accurately a tale from the bible. Tonight, she sounds like June. She talks back to everyone – the Commander, Serena Joy, her companion – like a woman who is not sure if she cares about staying alive. Like a woman for whom rebellion is quickly becoming a necessity.

Offed tests the boundaries of her relationship with The Commander, which until this episode has consisted primarily of carefully worded Scrabble battles. Joseph Fiennes plays The Commander so perfectly with a sympathetic and hapless air that could almost make you forget that he’s in control of all Offred’s torment. It shouldn’t be, yet it still is surprising when we find out he’s a true believer. He has Faith, at least as far as it is convenient for him. His quiet assertion that they “wanted to make the world better” is the closest we’ve gotten to a mission statement from the opposition, and its chilling to consider the import of his words. “Better never means better for everyone. It always means worse, for some.”

This is especially true when partnered with Emily’s storyline. We see her come back from her defilement, terrified and hopeless and lost. The “better” of which the captain speaks is wrought horribly across her body and soul. Alexis Bledel is absolutely astounding this week, managing to be at once overwhelmed, terrified, meek and defiant in her absurdist joyride around the marketplace. That moment of “better” is fleeting – she’s immediately caught – but not before enacting her own tiny bodily revenge upon her universe.

The end of the episode can be read in a lot of ways. After episode upon episode of watching every inch of June’s body be exploited for the society that owns her, we watch her take control back. She’s defiant, a woman invincible, walking up to Nick’s room. It’s the second time this episode we watch these two bodies have sex, but it’s the only time we’ve actually watched June and Nick have sex. It’s terrifying, exhilarating, and unfathomably dangerous. Like Bledel’s circular not-quite-escape attempt, it’s unlikely to lead anywhere good. But holy shit does it feel good to watch her do it.

I’d like to take a quick minute to call out the fantastic filming in this scene – which manages to fully capture the scene from June’s gaze. The camera swoops around their hands, their legs, Nick’s ass, gazing over the intimacy of the scene but not reveling in it. In that moment, we understand that this sex is not about Nick. It’s not about love. It’s not about the future. It’s about recapturing that which has been taken from them – from Emily literally and from June by implication.

I started this review complaining that “Faithful” felt more like traditional television. Maybe that’s not quite it – this week was focused on the short term emotions of our characters, and less on the epic world building and thematic resonance of their story. It was painful and joyful. And it nearly perfectly set up the next era in June’s story and left me desperately ready for more – albeit with a note of terror waiting for the other shoe to drop.