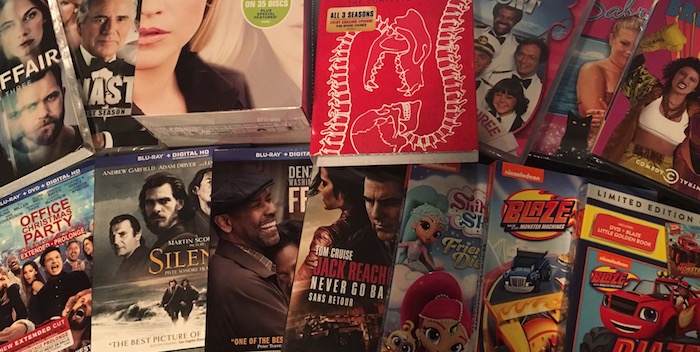 Jack Reacher: Never Go Back
Good ole Tommy. I love him. I always will. He never makes good movies anymore but I also kind of think he’s never made a bad one. This is, like they all are these days, fine.

Fences
A perfectly acted little theatre movie, I personally don’t think Fences really even counts as a film because they really did just play the script with no cinematic adaptation but I can’t say enough how happy I am that I have a version of the stage play that I can keep on my shelf and watch whenever I so choose.

Silence
Films like this that gain most of their magic from the romantic work of their brilliant cinematographers lose something when they leave the big screen but not enough people saw Silence and it was so tough to get through that almost nobody saw it twice. I don’t think it has much rewatch appeal but its subtleties might reveal rewatch rewards should you somehow convince yourself to sit through it again.

Office Christmas Party
My parents really liked this movie so there’s that I guess.

Medium (The Complete Series)
You really don’t need to own the complete series of Medium on DVD unless you’re building a comprehensive television library (which I am, so bring it on).

Penny Dreadful (The Complete Series)
This show, on the other hand, is the perfect Complete Series purchase, especially when it comes to this gorgeous and extras-packed Blu-ray edition. A dense, beautifully shot, under-watched, short-lived series- that’s what you want to own forever to watch over and over.

The Affair (Season 3)
I lost interest in this dull HBO drama almost immediately but you can’t argue that that core four cast is anything less than sublime (#ConwayForLife).

Sabrina Down Under
God yes. Sabrina the Teenage Witch was a defining show in my life and “Sabrina Down Under” (in which she studies marine biology and gets entangled with a merman!) is her feature-length adventure I remember best. Remember when she compared human vs. mermaid kissing culture with this guy? I sure do.

Rugrats (Season One & Season Two)
I wasn’t allowed to watch Rugrats when I was a kid because my mom didn’t like how mean Angelica was but then she watched the genius passover episode and changed her mind. This show is millennial nostalgia bait at its very best. Let’s just hope Paramount releases at least one more season after this because that passover episode is in season three and I Have To Have It.

Blaze and the Monster Machines
For a slightly older crowd than Bubble Guppies, you’ve got your over-gendered “boy” entertainment with car stuff, including this latest set which includes “Race in to Velocityville” and “Blaze of Glory” mini-movie (which is a limited edition gift set with Blaze Little Golden Book!).

Shimmer & Shine: Friendship Divine
For the over-gendered “girl” stuff, there’s eight episodes in 94 minutes of genie-related content, including “Mermaid Mayhem”, “Zoom Zahramay”, “A Tree-mendous Rescue”, “Freeze-amay Falls”, “Lightning in a Bottle”, “All Bottled Up”, “The Crystal Queen”, and “Bling, Bling”.